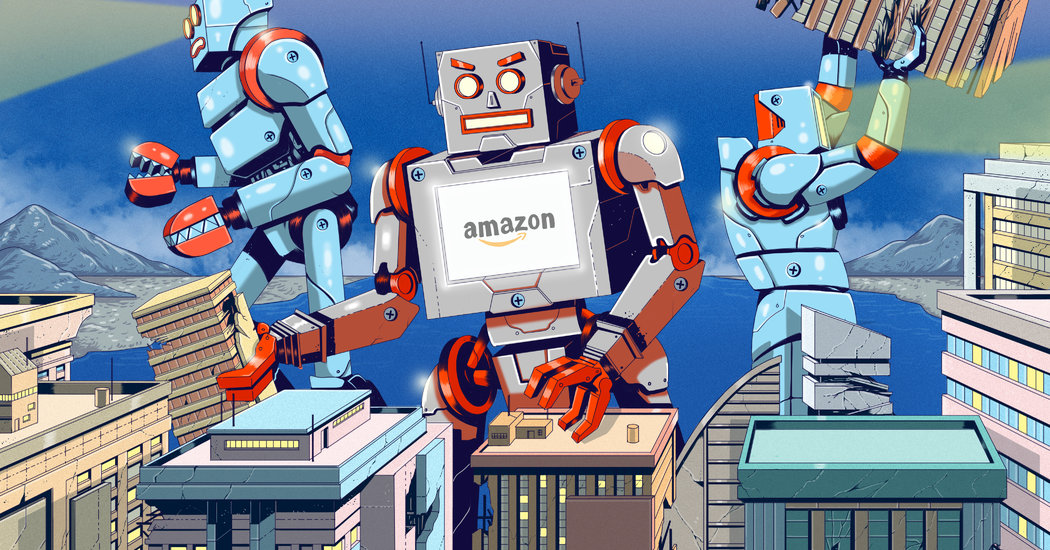 I’m not saying America’s cities are turning into dystopian technocapitalist hellscapes in which corporations operate every essential service and pull every civic string.

But let’s take a tour of recent news from the metropolises.

■ In Seattle, the City Council decided last week to undo its plan to impose a $275-per-employee tax on local businesses, a measure it had approved unanimously last month as a way to address the city’s homelessness and housing-affordability crisis. Why the retreat? Many of the city’s businesses balked at the tax, including Amazon — and no one needed to remind Seattleites that Amazon is very publicly looking for a second city to plant its glass balls. So, the Council caved.

■ The mayor of Chicago, Rahm Emanuel, announced that he had tapped the Boring Company, Elon Musk’s second side-hustle, to build a high-speed transportation tunnel from O’Hare International Airport to the city center. Boring said it would fully pay for the tunnel, using no public funds, but it is also likely to hold a long-term lease to the project, capturing all revenue from the private system.

■ You’ve heard of the app-powered electric scooters that descended like locusts on some American cities last spring. The start-ups that run them made a bold bet: Deploy now; worry about legal niceties later. The bet is paying off. Officials in San Francisco, Austin, Tex., and Santa Monica, Calif., have rushed plans for legalization. Bird, the most ambitious of the scooter start-ups, is now raising money at a $2 billion valuation, just weeks after raising money at a $1 billion valuation.

■ Finally, Domino’s Pizza announced a plan to pave America’s potholes. I wish I were kidding. As part of the program, Domino’s — which has been fashioning itself as a tech company now that it’s battling food-delivery start-ups for mind share — will imprint its logo into the roadway, because apparently Domino’s is the government now, and he who pays the paver gets to choose the toppings. (A Domino’s spokeswoman told that me cities could forgo the logo.)

O.K., so maybe I am saying that America’s cities are turning into dystopian technocapitalist hellscapes.

Across the country, cities are straining. Housing costs are exploding, transportation systems are overwhelmed, infrastructure is crumbling, and inequality is on the rise. Yet there’s little support from federal or state authorities — “infrastructure week” is a punch line in Washington, not a policy. Efforts to raise money for local projects are under siege from conservative activists, while measures to build more housing are halted by liberal ones.

Into this void march the techies, who come bearing money, jobs and promises of out-of-this-world innovation. But there’s a catch. Corporations are getting wide latitude in determining the future of cities. They are controlling more key services and winning important battles with once-indomitable city governments. Local officials find themselves at the mercy of tech: They can’t live without tech money, even if tech interests have a way of eclipsing every other civic priority.

Techies once despised politics. But many in the industry now see cities as the ideal beachheads for their planned revolutions in transportation, logistics, housing and other areas. So the tech industry learned how to woo and to fight City Halls — and they started winning, all over.

Here are some reasons.

One reason tech companies can command greater say in local issues is that many other local institutions, from small businesses to local newspapers, have lost much of their influence — thanks, in large part, to the internet.

In his new book, “The Increasingly United States,” Daniel Hopkins, a political scientist at the University of Pennsylvania, points out that social networks and digital media created a media ecosystem that is increasingly obsessed with national issues, and a political-finance system that allows donations to flow nationally. As a result, local issues are sidelined.

“When the framers of the Constitution designed the American political system, they assumed that people would care a lot more about local issues that were tangible and concrete than they would care about the distant ways of Washington,“ Mr. Hopkins said. “Contemporary American politics is exactly the opposite — we are focused on the spectacle far away.”

Mr. Hopkins argues that this has turned local politics sclerotic. For instance, in California, where I live, there’s a huge political disagreement between people who favor building more housing and those who argue that development is itself the problem (that is, Yimbys versus Nimbys). Yet among politically connected elites here, I noticed more interest in various faraway congressional special elections than the race we just had for San Francisco mayor.

The “key question for voters is always their national loyalties,” Mr. Hopkins said. There’s much less room for voting based on what’s happening nearby.

What does this have to do with tech companies? While the fall of local media undermined interest in local issues, tech companies began to notice that their platforms gave them direct access to new levers of local influence. And they began to deploy those levers to withering effect.

Uber wrote the script. Travis Kalanick, the ride-hailing company’s founder and now-ousted chief executive, pushed into dozens of cities without asking permission. In many cities, the pushback was intense — Uber was disrupting local taxi cartels that had spent decades building their own political power base.

But what Uber lacked in political support it made up for in local popularity. Through its app, the company had a direct connection to thousands of riders and drivers who were making a living from its service.

They became the basis for “Travis’s Law”: When regulators tried to shut Uber down, the company could “turn its riders into advocates and use grass-roots political pressure to ensure Uber’s continued existence,” as Bradley Tusk, the political operative whom Mr. Kalanick hired to fight local battles, writes in his coming book, “The Fixer: Saving Startups From Death by Politics.”

The plan worked beautifully. In New York in 2015, Mayor Bill de Blasio floated a proposal to cap Uber’s growth. The mayor had the support of most of the City Council; Uber’s fight looked impossible.

But Mr. Tusk mobilized Uber’s constituency, framing the issue in stark racial terms — if Uber failed, black and Latino drivers would lose an economic opportunity, and riders would be stuck with taxis that had long discriminated against them. Uber won and, by following its example, so would the rest of the industry.

Is tech power so bad?

You might argue that this is all to the good: Cities are drowning in red tape, local leaders are naturally averse to change, and tech companies are doing exactly what innovative companies should do. Shouldn’t we be celebrating these innovators?

But tech power, at the local level, feels increasingly indomitable. With the mere threat of halting growth, Amazon can send shudders through cities across the country. Even Mr. De Blasio, once seen as a critic of tech, now swoons for Amazon; he lit up New York’s landmarks in “Amazon orange” to woo Jeff Bezos to open the company’s second headquarters there.

Or, consider the scooters. Some people love our new e-scooter overlords, and others hate them. But whatever your position, the real problem is that they just appeared out of nowhere one day, suddenly seizing the sidewalks, and many citizens felt they had no real agency in the decision. They were here to stay, whatever nonusers felt about them.

Which was all by design. The scooter companies were just following Travis’s Law. In Santa Monica, Bird’s scooters appeared on city streets in September. Lawmakers balked; in December, the city filed a nine-count criminal complaint against Bird.

Bird responded with a button in its app to flood local lawmakers with emails of support. The city yielded: Bird signed a $300,000 settlement with Santa Monica, a pittance of its funding haul, and lawmakers authorized its operations.

If you love the scooters, you see nothing wrong with this. But there was a time, in America, when the government paid for infrastructure and the public had a say in important local services. With Ubers ruling the roads, Birds ruling the sidewalks, Elon Musk running our subways and Domino’s paving our roads, that age is gone.