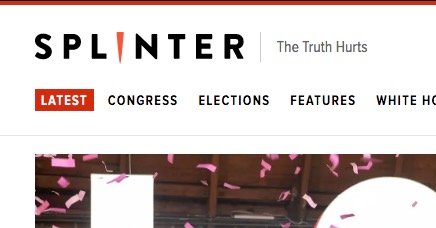 The fierce competition for political news online has claimed a once-promising newcomer.

In an email to the staff on Thursday morning, Paul Maidment, G/O Media’s editorial director, said the site would stop publishing new content. He said the company would aim to retain Splinter’s seven staffers at its other sites.

“Despite the hard work of everyone on that staff, which has produced much outstanding journalism and great scoops, establishing a steady and sustainable audience for a relatively young site has proved challenging in a fiercely competitive sector,” Mr. Maidment wrote in the staff email, which was provided to The New York Times.

“Given that reality, the leadership team has taken the extremely difficult decision to cease the site’s operations and redistribute the head count to our other sites to increase the impact the editorial department can have overall.”

But Gizmodo Media Group Union put out a statement on Twitter saying that Splinter’s seven staff members lost their jobs and were working with the Writers Guild of America, East to negotiate severance payments.

“Splinter did the kind of fearless and adversarial journalism that represents the very best of our sites,” the union’s statement said. “This loss hurts, and we’re worse off for it — particularly in the lead-up to one of the most consequential elections of our lifetime.”

Splinter was launched in 2017 by Fusion Media Group, a division of Univision; it was among a group of websites, which included Gizmodo, Deadspin and Jezebel, acquired by the private equity firm Great Hill Partners in April and renamed G/O Media.

Jim Spanfeller, a former executive at Forbes.com, was named the chief executive officer of G/O Media in April.