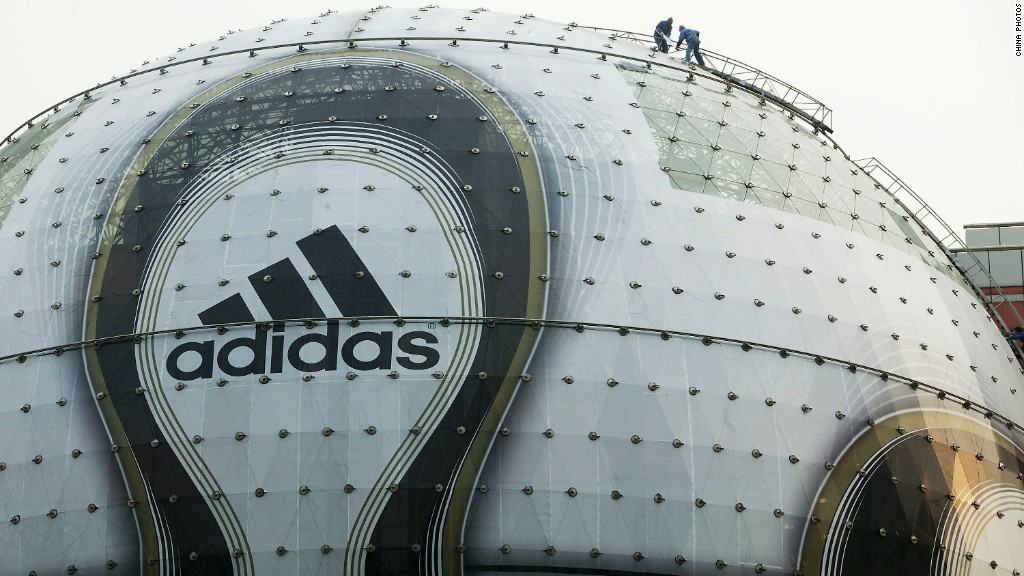 Sorry, Michael Jordan. It looks like your days as the king of the sneaker world may be over.

Nike (NKE) is still ahead of Adidas overall. But the fading popularity of Air Jordans, a brand that launched in the 1980s, is a telling sign.

NPD sports industry analyst Matt Powell said in a tweet that “this is an achievement I never thought I would see in my lifetime.” (Me either. I remember buying a pair of red, white and black Sky Jordans as a kid at my neighborhood JCPenney in 1985!)

But Jordan, now an owner of the NBA’s Charlotte Hornets, doesn’t seem to have the same marketing appeal he did back when he was a player winning slam dunk titles and six championships with the Chicago Bulls.

Foot Locker (FL) CEO Richard Johnson warned during its last quarterly earnings conference call that sales of some of Nike’s Jordan footwear and clothing “slowed considerably” in the quarter.

Weak shoe sales are hurting Foot Locker, and its rivals Finish Line (FINL) and Dick’s Sporting Goods (DKS) as well. All three stocks are down about 50% this year.

Strong sales from Adidas aren’t just bad news for Nike. Under Armour (UAA) is hurting too. Not even a second NBA title for Golden State Warriors star and UA endorser Steph Curry has been enough to lift sales of his shoes, which have been criticized for not being very fashionable.

Even Curry’s teammate Kevin Durant, who endorses Nike, recently said in a podcast with Bill Simmons that “nobody wants to play in Under Armours.”

Wall Street is clearly nervous too. Shares of Under Armour have plunged more than 40% so far in 2017. That follows a 30% drop last year. Nike’s stock is up 6% this year, but it was down nearly 20% in 2016, That made it the Dow’s worst performer last year.

But the problems plaguing Nike and Under Armour and the retailers that sell their shoes are not hurting Adidas at all.

The German-based company said last month that sales for the second quarter rose nearly 20%. Adidas also said that revenue and profits for the full year would be better than expected. Adidas investors are happy too. The stock is up 50% this year.

Adidas is benefiting from its deal with Harden, but it is also being helped by having two larger-than-life celebrities — Kanye West and his half-sister-in-law Kendall Jenner — endorsing Adidas shoes as well.

If this trend keeps up, Adidas might even be able to convince Los Angeles Lakers rookie Lonzo Ball (and his dad LaVar) to ditch their own Big Baller Brand of shoes and start wearing Adidas — especially if Adidas offers the Balls some lucrative stock options.