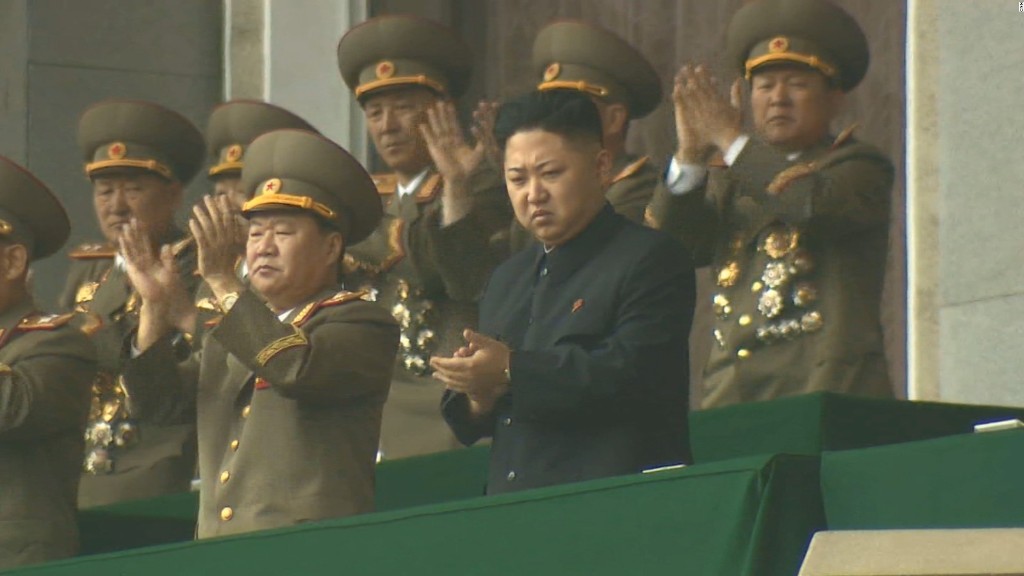 The doom-and-gloom crowd on Wall Street is making a comeback.

After months of relentless rallies, the U.S. stock market is finally showing some cracks. The S&P 500 is on track for its worst week in nearly five months, and Wall Street’s fear gauge has spiked by the most in almost three years.

Investors have been focusing on red-hot corporate profits, but talk of “fire and fury” turned attention to the risk of a nuclear conflict with North Korea. Others worried about lofty market valuations and pockets of weakness like the mounting red ink at JCPenney (JCP) and Snap (SNAP), both of which crashed to record lows on Friday.

And several high-profile investors like Ray Dalio and Jeff Gundlach offered buzzkills by suggesting that the second-longest bull market in history at least needs to take a breather.

“This selloff could be more than just a North Korea induced blip on the screen,” Peter Boockvar, chief market analyst at The Lindsey Group, wrote in a report on Friday.

Related: Is the bull run? Stocks get shellacked

The bears aren’t exactly back in control. The Dow rose slightly on Friday after shedding 205 points the day before, its worst slide in nearly three months. The Nasdaq climbed about 0.5%, bouncing back from a drop of 2%.

That means at least some investors are betting this market retreat will prove fleeting, just as countless others have. The economy looks healthy. So do the bottom lines of many major companies. Most Americans are hoping the tough talk from President Trump and North Korean leader Kim Jong Un is just that.

“North Korea will blow over and given the sentiment, we could see a rally back to new highs” by the end of next week, Michael Block, chief market strategist at Rhino Trading Partners, wrote in a report on Friday.

Still, the past few days of turbulence mark a significant shift after an unusually long period of quiet on Wall Street.

Yes, the VIX (VIX) volatility index remains historically low at just 15.4. But it has skyrocketed more than 50% since an all-time low on July 26. It’s on track for its biggest weekly rise since December 2015.

Cracks in the stock market rally led some investors to put their cash in havens like precious metals and ultra-safe government bonds. Gold has rallied 2% this week, while the 10-year Treasury yield touched a six-week low of 2.1%.

Gold got a boost from Dalio, the mercurial founder of the world’s biggest hedge fund, Bridgewater Associates. The billionaire warned on LinkedIn that investors should have 5% to 10% of their assets in gold because “risks are rising.”

North Korea just be an excuse for people to cash in winning stocks, especially tech companies like Apple (AAPL, Tech30) and Facebook (FB, Tech30). But investors are paying close attention to Trump’s North Korea warnings, including his tweet on Friday that “military solutions” are “locked and loaded.”

“The prospect of war still remains remote in our view, but at what point do both sides heat up the rhetoric so much that they can’t turn back?” Bespoke Investment Group asked in a report on Friday.

So is this week’s market turbulence just a blip or the start of the first downturn in a very long time? The S&P 500 hasn’t pulled back by 5% or more since June 2016. That’s the longest streak since 1996.

If tensions with North Korea de-escalate and the U.S. economy remains on track, it’s easy to see how stocks could quickly climb to new heights.

One potential obstacle is the world’s central banks, which are providing less support for markets these days. The Federal Reserve could soon begin to shrink its balance sheet, and the European Central Bank could taper its bond purchases.

Central banks are “not your BFF anymore,” and “market valuations are very high,” Boockvar wrote. This leaves “no room for error.”