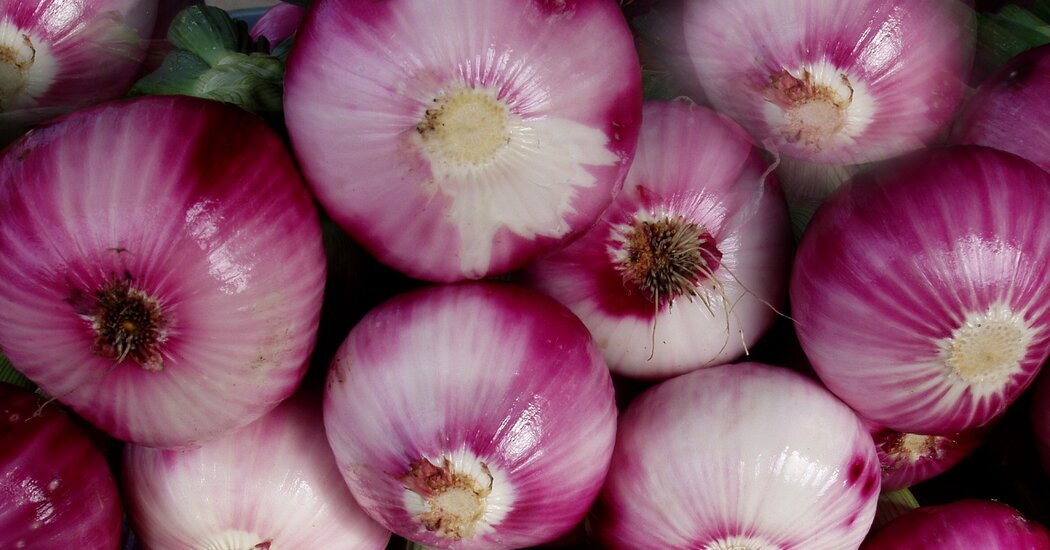 A salmonella outbreak linked to onions has expanded to 43 states and Canada, prompting a recall from a producer in California and various grocery chains, health officials said.

As of Sunday, there had been 640 reported salmonella cases, including 85 hospitalizations, tied to the outbreak, the Food and Drug Administration said. Many of the reported cases were in the Western states of Utah (90); Oregon (85); California (76); and Montana (52). There have also been 41 cases reported in Illinois.

The Public Health Agency of Canada reported 239 cases with 29 hospitalizations as of Friday. No deaths have been reported in Canada or the United States.

The F.D.A. identified the likely source of the outbreak as red onions from Thomson International, a produce supplier in Bakersfield, Calif. Last week, the producer recalled red, yellow, white and sweet onions shipped since May 1 because of the risk of contamination. The F.D.A. has started an investigation at the company.

The onions were distributed to wholesalers, restaurants and retail stores across the country and in Canada, Thomson said last week. The producer declined to comment on Sunday.

The Centers for Disease Control and Prevention has recommended that consumers throw away any onions or foods made with onions supplied by Thomson, or any related products that have been recalled. Health experts say to throw away onions or products containing them if consumers are unsure of who supplied the onions.

The illness, named salmonellosis, can persist for four to seven days, the C.D.C. said. Children, older adults and people with weaker immune systems are most at risk of developing severe illness.

Symptoms include diarrhea, fever and abdominal cramps. Those who are severely ill may also experience a high fever, headaches, a rash or bloody stool.

It is likely that a substantial number of cases will be reported over the next few weeks because of the lag between when a person eats onions and gets sick, and when that person is tested and has an agency report the illness, said Martin Wiedmann, a food safety professor at Cornell University.

He recommended not to consume the onions, even if they have been cooked, because cross contamination with utensils may have occurred.

Grocery chains and producers have joined Thomson in recalling the onions, including Publix and Giant Eagle. Taylor Farms Texas, a company that makes prepared foods, has also voluntarily recalled its products with onions in Kroger and Walmart stores.

“As soon as we were notified by Taylor Farms of the recall,” Walmart said in a statement on Sunday, “we immediately alerted our stores and distribution centers to remove the affected products from store shelves and inventory, and we placed a sales restriction on them.”

Walmart and Kroger have also been instructed to remove and dispose of any remaining products tied to the onions in their stores, Taylor Farms said.

Across Pennsylvania, Ohio, West Virginia, Indiana and Maryland, the grocery chain Giant Eagle recalled all bagged and bulk red, yellow and white onions last week, after the company was notified that its onion supplier, Onion 52, had sourced its products from Thomson. There have been no reported illnesses from the onions connected to Giant Eagle, the company said last week.

Giant Eagle has recalled almost 50 other products that include onion as an ingredient since July 25. They include salads, subs, dips, pizzas, pastas and salad dressings.

Red onions bagged and in bulk from Del Monte Fresh Produce that were sold at Publix stores across Alabama, Georgia, North Carolina, South Carolina, Tennessee and Virginia have been voluntarily recalled, Publix said in a statement Wednesday.

There had been no reported cases of the illness linked to Publix as of Wednesday, a company spokeswoman, Maria Brous, said in a statement.

“As part of our commitment to food safety, potentially impacted product has been removed from all store shelves, which were subsequently cleaned and sanitized,” Ms. Brous said.

The C.D.C. estimates that salmonella causes about 1.35 million infections and 26,500 hospitalizations in the United States each year. Although most people recover without treatment, more than 400 deaths in the country annually are tied to acute salmonellosis.

Salmonella can be spread when the hands, surfaces and tools of food handlers are not clean, and when people eat raw or undercooked food, the F.D.A. said. It can also be spread to people from animals.

Contamination can occur at many points during the harvesting and processing of produce — from the water used on the fields, from wildlife or even from an employee with salmonella at a factory, Professor Wiedmann said.

“No food ever will be zero risk,” he said.