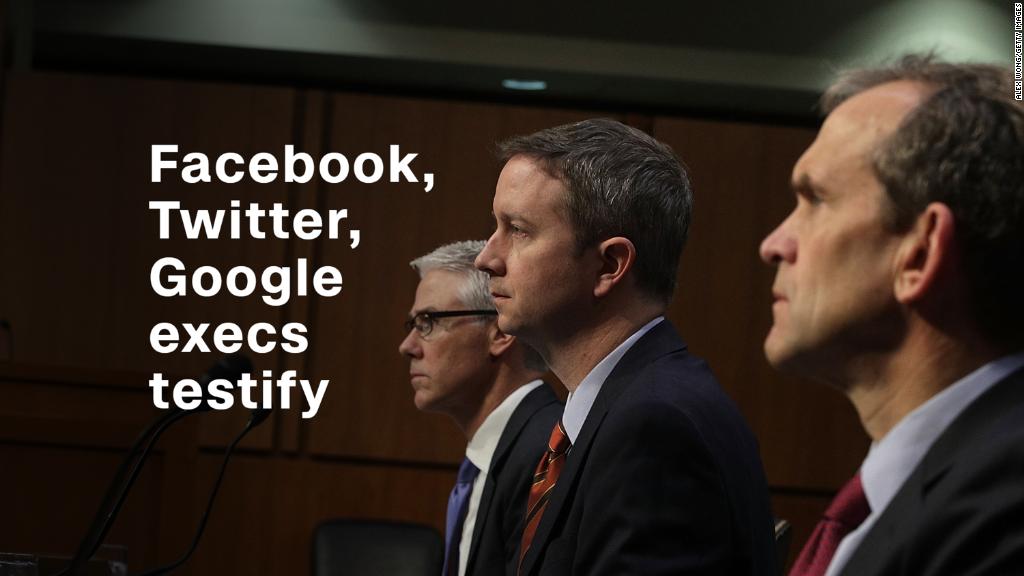 Silicon Valley survived an intense grilling by Congress this week, but the fallout may continue.

The top lawyers for Facebook (FB, Tech30), Twitter (TWTR, Tech30), and Google (GOOGL, Tech30) testified before Senate and House committees into how foreign nationals used these platforms to meddle in the 2016 presidential election.

The hearings, which focused disproportionately on Facebook, provided the first official glimpses of Russian-bought social media ads and revealed this content reached a larger audience than previously reported.

Facebook, for its part, repeatedly pledged during the hearing and on an investor call after to take the issue seriously and invest more heavily in preventing abuses of its platform.

“I’ve expressed how upset I am that the Russians tried to use our tool to sow distrust,” Facebook CEO Mark Zuckerberg said on an earnings call Wednesday afternoon. “What they did is wrong and we are not going to stand for it.”

Yet, the line of questioning this week exposed sincere doubts some legislators have about Facebook’s slow response to the problem and whether it’s capable of policing an audience that now numbers in in the billions.

The prospect of new regulation looms. So does the possibility of Congress requesting Zuckerberg and the CEOs of the other two companies to testify at a later date.

On the eve of the first hearing, Facebook revealed that roughly 126 million Americans may have been exposed to content generated on its platform by a Russian government-linked troll farm known as the Internet Research Agency between June 2015 and August 2017.

The figure was then increased during the hearings. Colin Stretch, Facebook’s general counsel, said the reach was nearly 150 million with Instagram included in the mix.

The disclosure represents a stark shift from the first days after the election, when Zuckerberg dismissed the impact of fake news on Facebook on voters.

But this staggering number may still not represent the total Russian activity on the platform. It’s just what Facebook has been able to track down so far. Facebook, and the other two companies, told lawmakers they continue to investigate the matter.

The tech companies also could not rule out that other countries, including North Korea and Turkmenistan, could have taken advantage of their platforms too.

Throwing money at the problem

As the final hearing was wrapping up Wednesday, Zuckerberg kicked off Facebook’s earnings call with a striking announcement: Facebook intended to invest so much in security that it would cut into profits.

“I am dead serious about this,” he said on the call.

A key part of the investment, first announced during the hearings, will be increasing the number of people who work on safety and security issues from 10,000 currently to 20,000 by the end of 2018. It’s unclear how many of these will be full-time employees as opposed to contractors.

While Zuckerberg framed the announcement as being part of Facebook’s “responsibility to society,” it also may be an attempt to reduce the odds of Congress imposing tough regulation.

“We think the company’s forceful response — much more so than peers — is a winning strategy in positioning the company more as a friend than a foe in the eyes of regulators,” James Cakmak, an analyst with Monness, Crespi, Hardt, wrote in an investor note Thursday.

Congress is not satisfied with tech promises

Despite the tech executives pledging again and again to take the issue seriously, it was clear members of Congress — and particularly the Democrats — were unsatisfied.

“I’ve been very proud… to represent this tech community from California, but I must say I don’t think you get it,” Sen. Dianne Feinstein, a Democrat from California, said at a hearing Wednesday.

“What we’re talking about is the beginning of cyber warfare,” she continued, before issuing a vague threat. “We are not going to go away, gentlemen. This is a very big deal.”

Sen. Mark Warner, the top-ranking Democrat on the Senate Intelligence Committee, lambasted the tech companies for not doing enough previously to address concerns about election meddling on their platforms.

“We’ve raised these claims since the beginning of the year, and the leaders of your companies blew us off,” Warner said. “Your earliest presentations showed a lack of resources, a lack of genuine effort and a lack of commitment.”

Warner is the co-sponsor of a new piece of legislation called the Honest Ads Act, which would require Facebook and other online companies to provide more transparency for political ads that run on their platforms.

Beyond any single piece of regulation, however, this week revealed a more fundamental disconnect between Silicon Valley and Washington over how much social media companies should interfere with content shared and promoted by users.

Some in Congress believe Facebook and its peers need to do more to crackdown on misinformation and dangerous content. Stretch said in one hearing that Facebook does not want to be the “arbiters of truth.”