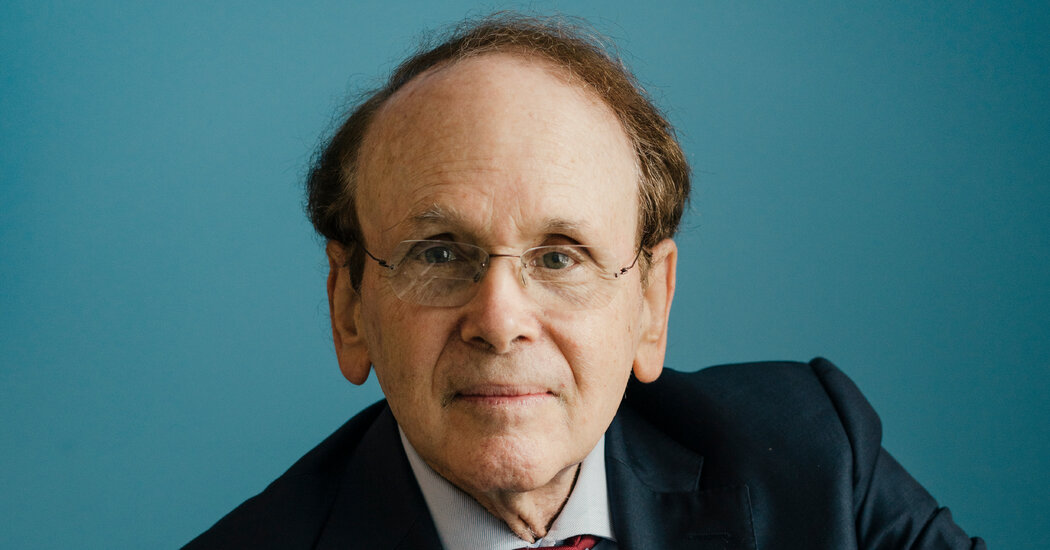 The war in Ukraine will undoubtedly dominate the upcoming World Economic Forum meeting in Davos, Switzerland, and Daniel Yergin, the energy historian, is among those whose insights are likely to be sought by that gathering’s global elite.

An expert and respected commentator on the energy markets and geopolitics, as well as an entrepreneur and business executive, Mr. Yergin is now vice chairman of S&P Global, a New York-based financial services firm.

He is also the author of several books, including, in 2020, “The New Map: Energy, Climate, and the Clash of Nations.” In 1992, he won a Pulitzer Prize for “The Prize: The Epic Quest for Oil, Money, and Power,” his history of the oil industry.

Mr. Yergin, who is 75, has been attending World Economic Forum meetings since the early 1990s and has helped shape the Davos approach to energy. He was recently interviewed by phone in Washington, D.C.; these are edited excerpts from the conversation.

Why go to Davos?

It is a very efficient way to connect with what is happening around the world and to get a lot of different perspectives in a very concentrated form. I always find it helps you see the new trends that are emerging.

What will be on the agenda this year?

There will be a sense of high urgency at Davos this year, beginning with the Ukraine war and the risks of escalation. There’s a real need to develop a deeper understanding of how sanctions on Russian energy will disrupt energy flows and how the disruption and logistics can be managed to reduce the overall economic impact.

Energy security will certainly be back on the agenda, along with energy transition and sustainability. Front and center overall will be the economy — how intractable inflation has been and how likely it is that there will be greater economic slowdown, and why the supply-chain disruptions continue to persist.

And there will be a focus on the big impact on developing countries from the double crises in energy and food. In addition to the war in Ukraine itself, I expect we will see at Davos the initiation of a dialogue on the reconstruction of Ukraine — whenever that can begin.

What are the implications of the Russian invasion of Ukraine for the energy markets?

People search for analogies. The last really big one was 1973 [the Arab oil embargo], which was a long time ago. We are now in the midst of seeing the biggest disruption in world energy markets in modern times. This is because it is not only oil. It is also natural gas. It is coal. And, increasingly, this is occurring within the wider boundaries of competition between the world’s two nuclear superpowers.

With all the difficulties, post-Cold War Russia was integrated into the world economy much more than recognized. That integration is breaking down. Russia is going to end up much more connected to, and dependent on, the Chinese economy. That trend is clear.

It looks like it’s going to be cut off for some time from Western investment and, even more important, Western technology. It is going to lose markets and market share.

One of Putin’s many miscalculations was his assumption that because of Europe’s dependence on Russian energy, it would protest but stand aside, as it did with Crimea [which Russia took over in 2014]. It has had just the opposite effect. Europe wants to get out of that dependence as fast as it can.

I think the turnaround in Germany has been particularly striking. As I understand, part of what made it happen was very close consultation between the German government and industry to understand actually how the ebbs and flows worked, what the alternatives are.

Will Europe be able to, as it were, divorce from Russia?

There are three parts. It is all hard, but crude oil is the one that for the most part you can proceed on with the least difficulty because there are supplies. Oil demand in China is way down because of Covid. U.S. production is going to go up.

Oil products are more difficult. Diesel is a real problem. You have to keep the trucks moving, and, in Europe, part of the car fleet is diesel.

Natural gas is the most challenging. People are finding additional gas in Algeria. I think one thing to watch is the Netherlands, which could add [a very large amount of natural gas from the Groningen field, which is being shut down because of earthquakes.] The Dutch government said only on an emergency basis [would it boost production]. Well, guess what, this is an emergency.

I think what makes the whole thing more difficult: everything is in short supply — the supply chains to build things, to make them happen. That adds delays to everything.

Has the invasion changed energy politics in the United States?

Starting in November or so, the Biden administration became much more focused on domestic oil and gas production and wanted to see it increase. There has definitely been a change, and it has been driven by prices and by disruption.

I think it is has also really changed thinking about natural gas and LNG [liquefied natural gas, transported on ships]. The Biden administration has embraced LNG as a potential element in energy security. LNG has become a key part of Europe’s energy security. That would not have been articulated at all before this crisis. There is now the recognition that the U.S. is going to be the largest exporter of LNG in the world, and its exports are going to be redirected to Europe.

The Russia-Ukraine War and the Global Economy

A far-reaching conflict. Russia’s invasion on Ukraine has had a ripple effect across the globe, adding to the stock market’s woes. The conflict has caused​​ dizzying spikes in gas prices and product shortages, and is pushing Europe to reconsider its reliance on Russian energy sources.

Global growth slows. The fallout from the war has hobbled efforts by major economies to recover from the pandemic, injecting new uncertainty and undermining economic confidence around the world. In the United States, gross domestic product, adjusted for inflation, fell 0.4 percent in the first quarter of 2022.

Russia’s economy faces slowdown. Though pro-Ukraine countries continue to adopt sanctions against the Kremlin in response to its aggression, the Russian economy has avoided a crippling collapse for now thanks to capital controls and interest rate increases. But Russia’s central bank chief warned that the country is likely to face a steep economic downturn as its inventory of imported goods and parts runs low.

Trade barriers go up. The invasion of Ukraine has also unleashed a wave of protectionism as governments, desperate to secure goods for their citizens amid shortages and rising prices, erect new barriers to stop exports. But the restrictions are making the products more expensive and even harder to come by.

Prices of essential metals soar. The price of palladium, used in automotive exhaust systems and mobile phones, has been soaring amid fears that Russia, the world’s largest exporter of the metal, could be cut off from global markets. The price of nickel, another key Russian export, has also been rising.

Has the imperative to shift away from oil and gas to cleaner energy been pushed back?

It definitely gives an urgency to the energy transition in terms of, particularly, renewables in Europe, and hydrogen to reduce the amount of gas in electrification. But, at the same time, I think energy security, which was not really much on the agenda and was taken for granted, is now very much on the agenda. And governments have to worry about current supplies as well as energy transition, and so it is a more complicated equation.

What does that mean for the world’s efforts to achieve net zero carbon dioxide emissions?

The International Energy Agency said half the commercial technologies that are needed do not exist. The direction is clear, but it really does come down to technology, and the scale is enormous. The world still runs basically 80 percent on hydrocarbons.

Coal consumption went up last year. There are short-term expedients that countries are going to do in an emergency — this is an emergency — that they wouldn’t do long term. One of them is to rely more on coal for electric generation, particularly in Europe.

Why have Saudi Arabia and the United Arab Emirates been reluctant to produce more oil?

Both of them are spending billions of dollars to expand productive capacity on the assumption that there still will be a big market for oil for some time, and particularly if production goes down elsewhere.

There are only 1.8 million barrels a day of spare capacity in the world. That is a knife edge. You could bring more oil into the market, but, at the same time, if you get to where there is virtually no spare capacity, the markets will get very nervous.

That is another similarity to 1973. On the edge of that global crisis, you had almost no spare capacity.

One knows Vladimir Putin has always demonstrated incredible knowledge; he is almost like a C.E.O. when he talks about energy markets. And one might assume that one of the reasons he thought this was an opportune time to move is that he recognized that the markets were so tight. And the Russians helped to make it tight the way they managed their gas shipments to Europe last year.

Does this open the way for more nuclear energy?

Yes. In France, when President Emmanuel Macron first came in, he wanted to roll back. Now he is talking about six new nuclear reactors, possibly another eight. Even the English energy security document has nuclear in it.

I was struck, at our conference, that chief executives of industrial companies are almost assuming we will have small nuclear reactors by the end of the decade. I think the German decision to shut down nuclear after Fukushima because of the tidal wave was not a wise decision.

Was Western investment in Russia’s energy industry a mistake?

The U.S. government was continually encouraging energy dialogues with Russia. All of this grew out of the almost unexpected collapse of the Soviet Union and the effort to integrate Russia into the global economy. Look at what was the alternative: to leave it festering? To have a country with large nuclear weapons integrated into the global economy was much better than to leave it isolated. There was a desire to have Russian energy and Central Asian energy as an offset to risk in the Middle East.

Energy was a subset of a much larger thing. I have seen there were well over 600 U.S. companies involved in Russia. Moscow has become a world city.

In two months, Putin has destroyed all of that. I think history will judge that what he has done makes no sense, that it is irrational. But it has happened, and it is the reality. And that is why we are into a new uncertain era. As we talk, the risks are going up.