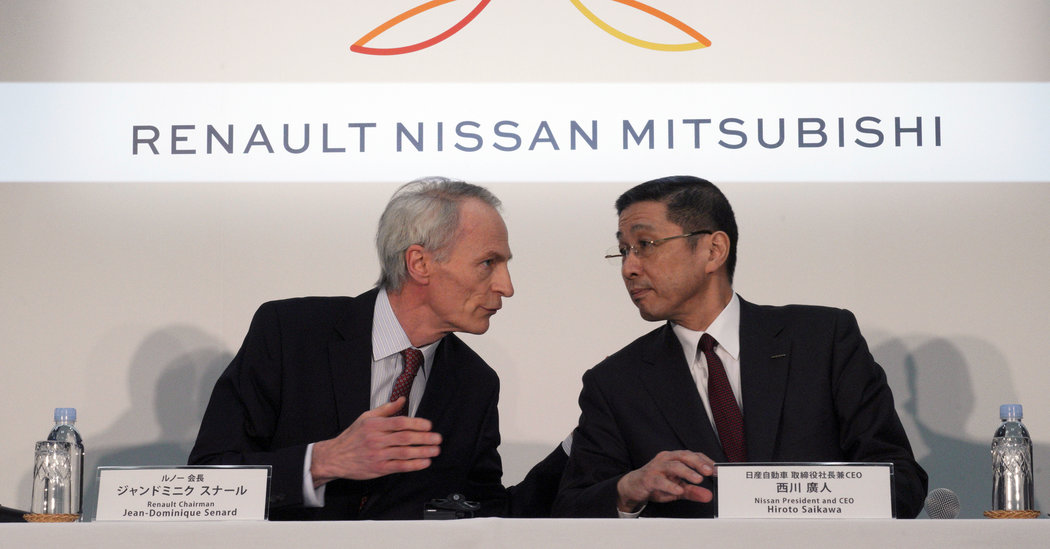 PARIS — A week after the collapse of a potential merger with Fiat Chrysler, the French automaker Renault is pressing to strengthen ties with Nissan, its partner in a decades-old auto alliance, to stay competitive in the global car market, the company’s chairman said on Wednesday.

Speaking to more than 900 Renault shareholders in Paris, Jean-Dominique Senard, the chairman, acknowledged that there was “a tense climate” between his company and Nissan. “But,” he added, “the good news is that nothing is irreparable.”

Mr. Senard and Hiroto Saikawa, Nissan’s chief executive, face scrutiny for failing to shore up the world’s largest auto alliance six months after Carlos Ghosn, who led the joint entity, was charged with financial misconduct. Mr. Ghosn’s arrest set off a destabilizing chain of events at the two companies.

The strained relationship has deteriorated further in recent days. Mr. Senard said last week that Renault would block a proposed overhaul of Nissan’s governance because the new system would deprive his company of adequate representation on the Japanese carmaker’s new three-committee board.

This week, Mr. Saikawa’s position appeared to be at risk after two influential investment-advisory firms recommended that he be ousted. The firms cited what they said was his failure to identify the alleged financial wrongdoing by Mr. Ghosn and Greg Kelly, a Nissan board member accused of devising ways to mask millions of dollars in improper compensation for Mr. Ghosn.

Mr. Senard, speaking to Renault’s annual general meeting of shareholders in a cavernous amphitheater at the Palais des Congrès, painted a picture of an auto alliance that needed to be stronger than ever after Fiat Chrysler abruptly withdrew its proposal for a merger that would have reshaped the global automobile industry.

Mr. Senard did not say whether the two companies would hold further talks. But he pointed a finger at the French government, Renault’s largest shareholder, as playing a major role in scuttling the deal. Only a few months ago, he told the crowd, France’s finance minister, Bruno Le Maire, had “suggested that I make contact with Fiat Chrysler management, and I did it.”

Fiat Chrysler’s main concern going into the talks with Renault was that a merged company not be perceived as politically influenced. The proposed deal was structured to reduce the French state’s longstanding role in Renault by trimming its stake to 7.5 percent from 15 percent, but Mr. Senard indicated that the government had been involved every step of the way.

Renault, he said, will now work on “rebuilding the fabric of confidence” with Nissan, a maneuver that he said would require “patience and an effort on both sides.”

It remains unclear how easy that will be. Nissan is facing fresh challenges as its profitability stumbles and demand for its cars declines in major markets. And the criticism of Mr. Saikawa, who has led Nissan since Mr. Ghosn’s arrest, is intensifying.

Glass Lewis, a large proxy voting service, said this week in a letter to shareholders that it had lost confidence in Mr. Saikawa for failing to ensure proper oversight of Mr. Ghosn and Nissan executives. “We hold grave concerns that this incident signaled a lack of oversight, poor internal controls and weak risk management,” the group said.

Institutional Shareholder Services, another proxy voting firm, went further, questioning how Nissan, under Mr. Saikawa’s leadership, had “built a corporate culture molded by Ghosn’s effective dictatorship,” and how Mr. Ghosn could have enriched himself without others at the company knowing. Shareholders should not reaffirm Mr. Saikawa as Nissan’s chief executive, ISS argued, so that the company could make a clean break from its past.

The firms’ recommendations came as Mr. Kelly, the former leader of Nissan’s human resources operations, told a Japanese newspaper in his first interview since being arrested in November that Mr. Saikawa had signed off on lavish compensation for Mr. Ghosn and had approved luxury housing that Nissan provided for Mr. Ghosn in several countries. Mr. Saikawa has denied knowing about the spending.

Many institutional investors base their votes on advice from proxy voting services. To be reappointed, Mr. Saikawa will need the support of at least half of Nissan’s shareholders when the company holds its annual shareholders meeting on June 25.