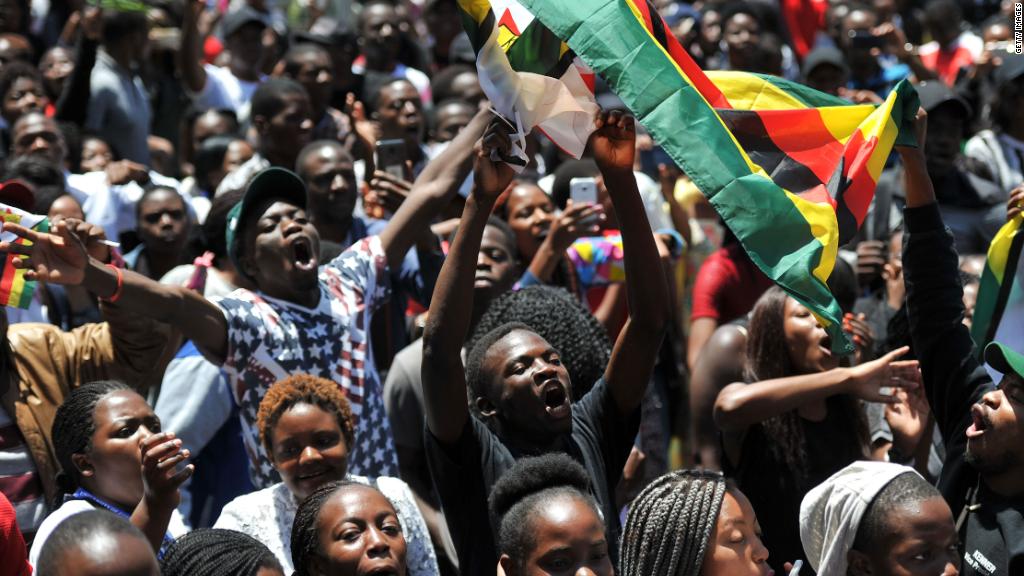 The scenes of unbridled joy in Zimbabwe following the resignation of Robert Mugabe were remarkable. His 37-year rule brought misery to the nation, devastated its economy and left its citizens impoverished and terrified. Now it’s over.

What comes next? Former vice president Emmerson Mnangagwa will be the interim president until scheduled elections in 2018. But he was also the right hand man for Mugabe over 4 decades. His role as Mugabe’s enforcer earned him the nickname of “The Crocodile.” So if past performance is any guide to future prospects, it could be out of the pan and into the fire.

The challenges facing Zimbabwe are formidable. Mnangagwa and his eventual successor must first stabilize its economy before it can entertain any rosy hopes of attracting international investment. This means getting to grips with its currency fiasco. Zimbabwe’s new leaders also need to get a firm grasp of the country’s budget deficit and start to think about dealing with its debt. That could mean tough decisions which, in the short term, will inflict more economic pain on people who have already suffered so much.

Help will be needed from “the usual suspects” too — the IMF, World Bank and the African Development Bank. Regional powers like South Africa will have to play their part in creating confidence for investors as well.

All of this will be wasted if Mnangagwa and the ruling Zanu-PF party haven’t learned from Mugabe’s failures. I don’t want to be harsh. But before we rush to prop up Mnangagwa with good cash after bad, let’s make sure “The Crocodile” isn’t planning to bite the hands that look to feed Zimbabwe.

Tencent, the owner of the Chinese mobile messaging app WeChat, is now worth more than a half-trillion dollars. The company’s market value even briefly topped Facebook’s before pulling back a bit.

Tencent is a big player in mobile gaming and video streaming, too. And it’s acquired sizeable stakes in Snapchat’s parent and Elon Musk’s Tesla. It’s part of a plan of Tencent founder Ma Huateng — known as “Pony” since his surname Ma translates to horse in English — to build a major tech conglomerate.

Tencent is also worth more than the other Chinese giant led by someone else named Ma — Jack Ma’s Alibaba.

Bitcoin is surging but cash isn’t dead yet

Bubble or boom talk aside, the virtual currency’s surge raises another question: Is paperback currency doomed?

Not at all, says the San Francisco Federal Reserve. In fact, it found that circulation of U.S. dollars has increased 87% over the last 10 years.

Fun fact: Most of the printed U.S. dollars are actually held outside the United States.

China is winning the global battle to obtain lithium — which gives the country a massive leg up as consumers slowly pivot to electric cars.

Chinese companies have been inking deals around the world to secure access to the metal, which is a vital component of electric vehicles’ batteries. Experts say Western companies are late to the party, and will need to play catch up.

In other car news: Tesla has unveiled a new sports car that’s super fast. Oh, and it might fly, if Elon Musk’s tweets are to be believed.

President Trump has said the U.S. economy “desperately” needs “massive” tax cuts. Yet the economy looks healthy right now. Unemployment has gone from 10% during the Great Recession to 4.1% today.

Goldman Sachs predicts it’ll drop to 3.5% by the end of 2019. The jobless rate hasn’t been that low since 1969. Janet Yellen cheered the labor strength in a letter saying she will step down from the Federal Reserve.

Of course, economic obstacles still loom, especially on the trade front. Talks to renegotiate NAFTA are not going well, raising the risk that Trump will withdraw the U.S. from the critical trade alliance.

All eyes on Black Friday: The biggest shopping weekend of the year is almost here — and retailers are crossing their fingers that it will deliver. With Amazon cutting into foot traffic at many stores, retail companies need a big one. Here’s a guide to the madness.

Closing out earnings season: Some well-known companies will post results next week, including Tiffany & Co. on Wednesday and Barnes & Noble and Kroger on Thursday.