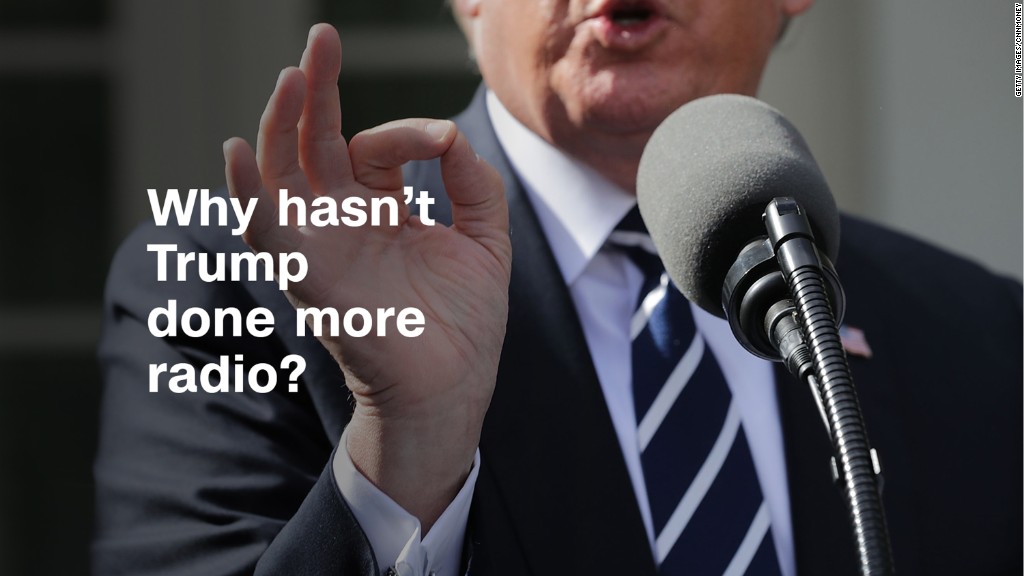 President Trump has invited The New York Times into the Oval Office. He’s granted behind-the-scenes White House access to Time magazine. And he’s sat for interviews with the network news. But there’s one medium the president has conspicuously ignored: conservative talk radio.

If there were ever a medium built for Trump — besides Twitter — talk radio would be it. But in his first eight months as president, Trump did not do a single interview on talk radio.

Most of talk radio’s high-profile stars — Rush Limbaugh, Sean Hannity, Laura Ingraham — are strongly supportive of the president’s agenda and unlikely to be combative or hostile in an interview. They reach large audiences (Limbaugh reaches approximately 14 million people each week, according to Talkers magazine), allowing Trump to use the medium to sell policy to the American people. Above all, the listeners are some of Trump’s strongest supporters, the very people the president enjoys speaking to when he holds rallies around the country.

Yet, since being inaugurated as president, Trump has shied away from appearing on radio programs. After this week, he will have made two forays onto talk radio — and both of them came almost immediately after CNN contacted the White House to ask why he hadn’t been speaking on the platform.

Trump’s first and only appearance on talk radio as president thus far came in late September — days after CNN repeatedly asked the White House for comment on why the president was ignoring the medium — when he called into the Alabama radio show “Rick & Bubba” to offer support for the candidate he had backed in the U.S. Senate race there.

It’s unclear whether this will be enough to quell voices from the right who have started to zing Trump for ditching talk radio.

“TRUMP KEPT FROM TALK RADIO TO SELL TAX REFORM!” Michael Savage, a nationally syndicated talk radio host, tweeted last month. “IGNORES BASE THAT ELECTED HIM. WHO IS STEERING HIM?”

“On one hand, he ridicules the liberal media as fake news and ‘the failing NYT’ — and then desperately seeks their approval, while ignoring any news outlets that are fair to him,” author Ann Coulter added to CNN. “So who are voters supposed to believe?”

A senior White House official insisted to CNN that despite Trump thus far avoiding the platform, he has a great relationship with talk radio. The person said the President has largely chosen to utilize Twitter to speak directly with his base, a tool that either didn’t exist or was still in its infancy during previous Republican administrations.

The first White House official said there have been more than 80 talk radio appearances made by administration officials or outside surrogates booked in coordination with the White House since Trump took office.

“The administration as a whole, as well as our allies outside the administration, have been pretty aggressive appearing on and getting our message out to talk radio folks,” the White House official said.

It is true that a number of administration officials have appeared on talk radio. Vice President Mike Pence, a former conservative talk show host himself, has been deployed a number of times to sell the administration’s agenda. Kellyanne Conway, Mick Mulvaney and others have also made appearances.

That, however, doesn’t explain why Trump has been missing in action from the radio airwaves.

Ingraham, the nationally syndicated radio host who was once considered for the job of White House press secretary, told CNN over email that she plans to invite Trump on her show soon and would encourage him to be more visible on talk radio. She said “it’s smart” for the president to be “heard on ALL platforms as he tries to advance his agenda.”

“After all, talk radio helped launch him politically,” she said. “He was doing interviews on my show going back a decade.”

So why hasn’t Trump heeded such advice?

“The only thing that I can think of is that Donald Trump doesn’t listen to the radio,” said Sykes, reflecting the opinion of others who spoke to CNN as well. “He watches television. He reads The New York Times. So he reacts to what’s in his world.”

On the other hand, Trump appeared frequently on the airwaves during the campaign to discuss the news of the day.

“When he needed us, he was appearing on our shows all the time,” Joyce Kaufman, a conservative talk show host in south Florida who strongly supported Trump in the 2016 election, told CNN. “Then it sort of dried up.”

Kaufman said she has put in requests with the White House to interview Trump, but they haven’t proven fruitful. She said she thinks Trump knows he “is vulnerable in a long form interview” with a conservative host who will hold his feet to the fire on issues like immigration.

“I think he is sophisticated enough to know that it is not going to be friendly like during the campaign,” she said. “We are the people that got him elected. And we are tired of being lied to.”

Related: Pro-Trump media incensed over reports he struck deal with Dems on Dreamers

That said, while some radio hosts may grill Trump over his campaign promises, there is a large selection of others who are likely to be exceedingly friendly. Limbaugh and Hannity, for instance, rarely break with the President and frequently repeat White House talking points to their audiences.

At the same time, however, even those interviews could prove harmful.

“Trump can quote generalities, but he can’t talk through them,” Burguiere added. “When he gets down to the minutiae, he’s not really familiar with them. So he ends up trying to navigate around those things and a lot of times he gets in trouble with that.”

Consequently, Burguiere argued that the White House communications shop may think it is better to let talk radio hosts make Trump’s arguments to their audiences for him.

“Rush Limbaugh is going to make a point about Donald Trump in a much more effective way than Donald Trump can to that audience,” Burguiere said. “So you already have Rush Limbaugh making these points. Why go on when he can make a much better argument?”

That said, President George W. Bush was known for being prone to gaffes, and he opened his arms to talk radio. Trey Bohn, who served as director of radio media in the Bush White House, told CNN that they “always put a big emphasis on talk radio” because it allowed Bush to get his message out “without the filter of the Beltway.”

President Barack Obama, for his part, wasn’t a friend to conservative talk radio, but did appear on NPR to champion his agenda.

Bush and Obama, however, operated much more traditional communications shops — ones with a far more disciplined strategy. Asked about the Trump White House’s communications playbook, a former Obama official told CNN he was “hesitant to attach rational strategy to this White House,” suggesting Trump’s absence from the airwaves was perhaps merely a function of the current press shop being so scattered.

“From what I can tell, they’re flying by the seat of their pants,” the former Obama White House official told CNN. “There’s no evidence of an earned media strategy. None of his print interviews seem to have been strategic — each one seems to only add to the chaos of their coverage. There’s no evidence that they have a media plan and then execute it. My sense is they’re just barely holding on — let alone designing and operationalizing a proactive press plan.”