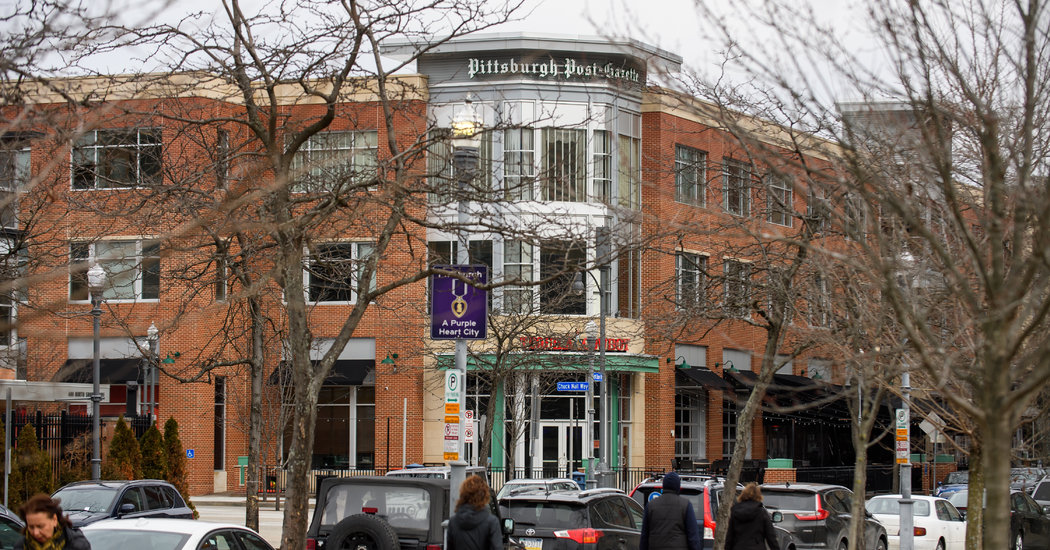 The publisher of The Pittsburgh Post-Gazette went to the newsroom on Saturday night, subjected staff members to a long tirade and threatened employees’ jobs as his young daughter sobbed and begged him to stop, according to several journalists who were present.

The outburst came amid a longstanding labor dispute that has intensified in recent months. In December, the journalists’ union hung a poster reading “Shame on the Blocks!” on an office bulletin board, which angered the publisher, John Robinson Block, employees said.

The Newspaper Guild of Pittsburgh, which published four employees’ detailed accounts of the visit on its website, filed a complaint with the National Labor Relations Board on Wednesday and called for Mr. Block to be barred from the office.

The union said it had submitted evidence of the outburst directly to Block Communications, the company that owns The Post-Gazette and The Toledo Blade.

Mr. Block entered the building with his daughter, who is a minor, around 10 p.m. and immediately began shouting, employees said. He yelled that he wanted a picture taken of himself and his daughter in front of the “Shame on the Blocks!” sign and demanded that it be published on the front page of the next day’s paper, Marianne Mizera, a digital editor, wrote on the union website.

Ms. Mizera wrote that she was watching as he “forcefully grabbed” his daughter’s arm to pull her into the picture.

“She was crying, shaking and pleading with her father that she did NOT want to be in ANY photograph,” Ms. Mizera wrote.

Carl Remensky, who works on the sports desk, wrote that he had also seen Mr. Block trying to pull his daughter in front of the bulletin board for a photo as she cried and yelled.

Andrew Goldstein, a night police reporter, wrote that, at another point, Mr. Block was “screaming in his daughter’s face about the Block family legacy,” saying: “‘Do you want to be high class or low class? You’re a Block, you’re one of us! You have to learn how to lead!’”

Alex Miller, a paginator, added that Mr. Block had punched and slapped the poster and the wall.

“He appeared totally out of control,” Mr. Miller wrote. “He was loud and violent, and it was frightening to witness because he was so erratic.”

During the episode, Mr. Block berated current and former managers, bemoaned losing millions of dollars on the company and threatened to fire employees who were Guild officers, the workers said.

In a statement on Thursday, Block Communications disputed the employees’ accounts, saying that Mr. Block had only “expressed his frustration” to employees “about several issues of concern to him.” The company said it provided a safe work environment.

“We have conducted a review of all information available, and we disagree with the characterization of Saturday evening’s events as expressed by the Newspaper Guild. No one in the newsroom was physically threatened, contrary to published reports,” the statement said.

Mr. Block “expresses his sincere regrets over his conduct that evening and did not intend his actions to upset anyone,” it added.

Company officials declined to elaborate on the statement, citing the pending National Labor Relations Board case.

Michael A. Fuoco, a longtime reporter at the paper who is president of the union, said Mr. Block had returned to the newsroom on Wednesday and Thursday.

“Everybody is on edge,” he said, adding that some fearful employees had not reported to work.

The union’s complaint filed Wednesday charged that Mr. Block “restrained and coerced employees in the exercise of their rights” and that he threatened them “with shop closure or job loss unless they cease engaging in union or other protected activity.”

Employees at The Post-Gazette have been working without a contract for the last two years and have not received a raise in 13 years, the union said. The union also said the company refused to pay a health insurance premium increase.

There have also been disputes over editorial decisions.

In January last year, on Martin Luther King’s Birthday, The Post-Gazette and The Toledo Blade published an editorial with the headline “Reason as Racism,” which defended President Trump’s stance on immigration despite his vulgar descriptions of several countries.

The editorial drew condemnation from the Post-Gazette newsroom — and some shareholders and members of the Block family, who wrote a letter to the editor saying the editorial did not reflect their values.

In June, Rob Rogers, a staff editorial cartoonist who had joined the paper in 1993 and was a finalist for a Pulitzer Prize in 1999, was fired. Mr. Rogers, whose cartoons are unabashedly liberal, said 19 cartoons or proposals had been rejected by the editorial page editor or the publisher in the months before he was fired.

The Post-Gazette employs about 150 reporters, editors, photographers and artists in the newsroom. The Block family has published the newspaper since 1927.

Mr. Fuoco said the union wanted the company to hold Mr. Block to the same standards it would any other employee.

“We want to feel safe in our workplace, and right now, many people don’t feel that way,” he said.