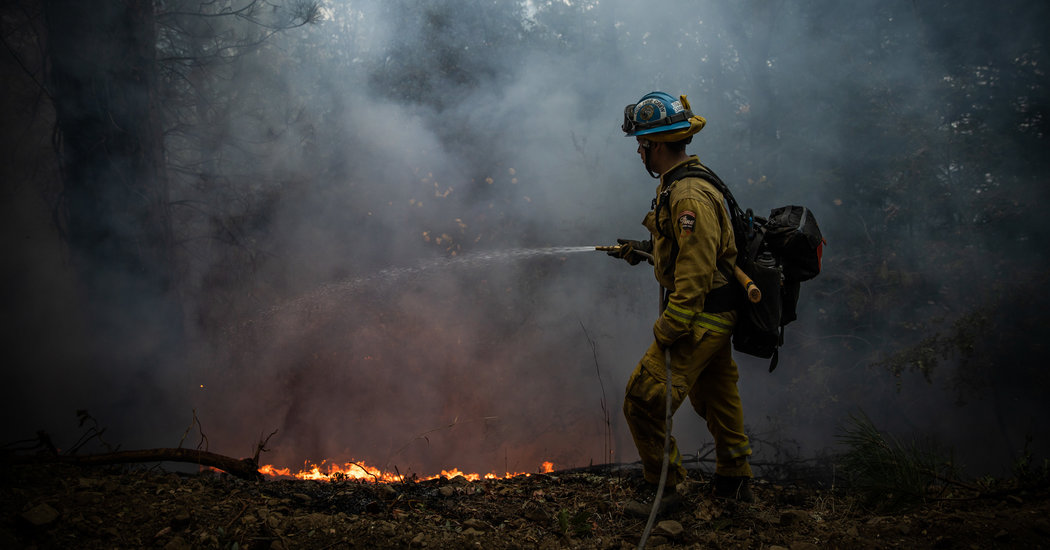 After an autumn marked by mass blackouts and wildfires, Pacific Gas & Electric is racing to craft a plan to escape bankruptcy. That plan needs to satisfy fire victims and state officials who are threatening to take over California’s largest utility unless executives improve its safety record.

If PG&E doesn’t reach an agreement with victims and other creditors by early next year, the utility might not be able to participate in a new state wildfire fund. A federal bankruptcy judge could also strip control from its management and board, or allow it to be broken up with the pieces sold to the highest bidder.

These tensions surfaced in a court hearing on Tuesday in which PG&E asked a bankruptcy judge to limit its liability for wildfires, and at a legislative hearing that featured the company’s chief executive on Monday in Sacramento.

Another big problem for PG&E: California’s fire season isn’t over yet. A dangerous combination of high winds and dry conditions is expected as early as Wednesday morning, and PG&E has said that it could cut power to up to 303,000 customers. That works out to more than 800,000 people — when accounting for shared addresses — in 25 counties across the Bay Area, wine country and the Sierra foothills.

So far this fire season, the utility has pre-emptively shut off power to nearly three million people in northern and central California, some for as many as five days. PG&E has said that the blackouts help guard against fires ignited by the sparks created when windblown tree branches collide with live power lines. But critics, including state and local government officials, have said that PG&E has done a poor job of warning residents about the shut-offs, which have had a disproportionate impact on low-income families who cannot afford generators or batteries, and on older and sick residents who rely on electric medical devices.

For some, the blackouts have amounted to “a big screw-you,” said State Senator Bill Dodd, a Democrat whose district includes Napa and Sonoma, during a hearing on Monday in Sacramento.

PG&E has warned that it might have to employ such blackouts for up to a decade while the utility makes up for deferred maintenance. On Monday, the company’s chief executive, Bill Johnson, told lawmakers that it aims to move faster and reduce the number of affected customers by one-third or more starting next year. To do so, it is installing backup energy systems like microgrids, underground power lines and weather cameras.

“It’s not acceptable to me to have another year like this,” Mr. Johnson said.

Not everyone is willing to wait. State Senator Mike McGuire, a Democrat who represents the area where the Kincade fire burned 174 homes recently, is one of many lawmakers who has said that the state should consider offering a “public option” for electricity. PG&E has already stumbled twice, he said on Monday, with a deadly 2010 gas explosion and several devastating fires in the last two years.

“I think we’re on our third strike,” Mr. McGuire said. “They’ve failed us too many times.”

That hostility serves as the backdrop for a fierce battle in bankruptcy court over how much money PG&E will pay wildfire victims, insurance companies, public agencies and other creditors. The company recently lost the exclusive right to propose a plan for resolving its bankruptcy. That opened the door for holders of PG&E’s bonds and the group representing wildfire victims to propose a competing plan. The bankruptcy judge overseeing the case, Dennis Montali, recently appointed a mediator to try to get PG&E and its bondholders and the victims to reach a settlement.

On Monday, in an effort to reach a deal, PG&E increased the amount it is willing to pay to settle fire claims to $25.5 billion, up from $18.9 billion.

But it’s not clear whether that will satisfy all parties. While the fire victims and the insurance-claim holders have the biggest claims against the company, others are also fighting to maximize their share of the $25.5 billion. Federal, state and local agencies say they are owed some $7.5 billion for fighting fires started by the utility’s equipment, taking care of victims and other costs.

Another big point of contention is how those claims will be paid. Under earlier proposals, holders of insurance claims, many of which were bought by hedge funds, would have gotten $11 billion in cash. But other claimants, including the wildfire victims, would have been paid almost entirely in stock of the new, reorganized PG&E. But since stock can lose value, many people and organizations would prefer cash.

Robert Julian, a lawyer representing the wildfire victims, said in bankruptcy court on Tuesday that PG&E’s settlement with the insurance-claims holders had become “the elephant in the room” in the bankruptcy. The claims holders have not attended recent mediation sessions.

“We can’t resolve this case because they’ve taken all the cash,” Mr. Julian said.

Gov. Gavin Newsom has also come out against the deal with insurance-claim holders, calling it premature. If victims, PG&E and insurance-claim holders cannot come to mutual agreement, “the state of California will present its own plan for resolution of these cases,” lawyers for Mr. Newsom wrote in a recent legal filing.

Some California politicians are considering drastic measures. Sam Liccardo, the mayor of San Jose, has proposed turning PG&E into a customer-owned entity. All fire claims in bankruptcy would be paid in cash under that plan, according to Alan Gover, a lawyer who is working on it.

PG&E must emerge from bankruptcy by June 2020 in order to participate in a new wildfire fund that California set up this year to shield the state’s largest utilities from future wildfire claims. If there is no settlement between PG&E, fire victims and other creditors by early next year, however, two other potentially lengthy trials are set to begin. These would decide the utility’s liability to fire victims with the help of a jury and expert witnesses.

While PG&E has repeatedly promised to pay all fire victim claims in full, bankruptcy experts say that troubled companies often find it difficult to do so, and many victims are left with much less than they hoped for.

“You kind of have to put ‘in full’ in quotation marks,” said Ralph Brubaker, a professor who specializes in bankruptcy at the University of Illinois College of Law.

Judge Montali last week extended the deadline by which people who lost homes and property in a PG&E-linked fire had to file claims to Dec. 31, from Oct. 21. Some fire victims said just days prior that they had not yet filed claims because of confusion about the process or trouble getting back on their feet.

“I am sure we missed thousands of people,” said Helen Sedwick, a lawyer who lost her home to fire in 2017 and has dedicated time to registering the claims of fellow survivors.

“Many people were starting from scratch,” she said. “Once they learned about it, there was a frantic sense of, ‘I need to understand this and do something quickly.’”