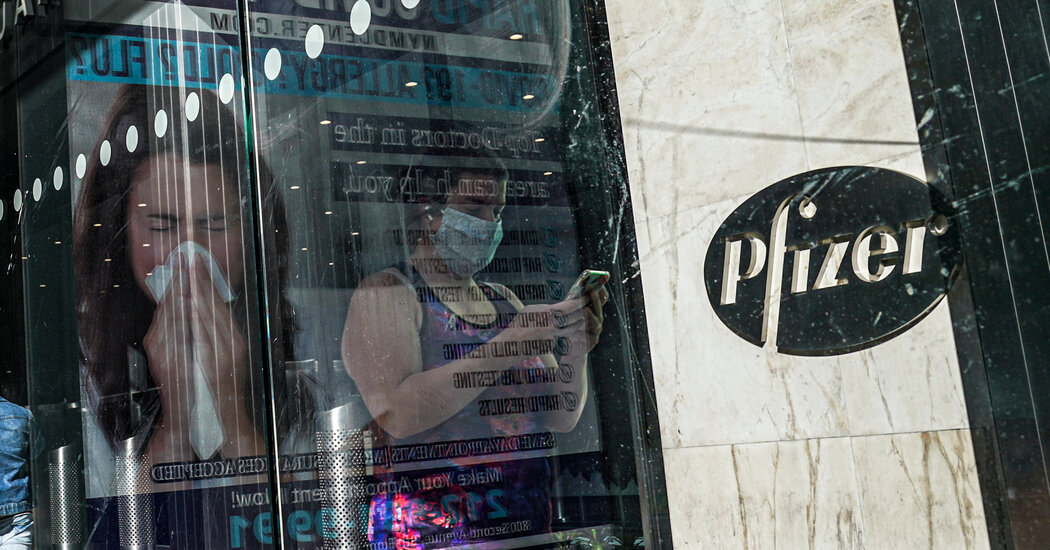 The drug maker Pfizer said on Friday that it had submitted an application to the Food and Drug Administration to authorize its coronavirus vaccine for emergency use, setting in motion an accelerated regulatory process that could allow the first Americans to get a vaccine by the middle of December.

Pfizer and its German partner, BioNTech, announced Wednesday that the vaccine was safe and 95 percent effective, and that it also worked well in older people and in preventing severe Covid-19.

Another front-runner, Moderna, said on Monday that its vaccine, which uses similar technology, was 94.5 percent effective and that the company also expected to apply soon for emergency authorization.

The two vaccines use a synthetic version of coronavirus genetic material, called mRNA, to program a person’s cells to churn out many copies of a fragment of the virus.

In a video message Friday, Pfizer’s chief executive, Dr. Albert Bourla, called it a “historic day,” and said, “It is with great pride and joy — and even a little relief — that I can say that our request for emergency use authorization for our Covid-19 vaccine is now in the F.D.A.’s hands.”

Both of the companies’ vaccine candidates began large human trials on the same day, July 27, leading the pack of six vaccines the federal government has invested in through its crash vaccine development program, Operation Warp Speed.

If the two vaccines are authorized for emergency use, federal and company officials have said there could be enough doses to immunize about 20 million Americans before the end of the year, a group that would most likely include health care workers and nursing home residents. There are an estimated 17 million to 20 million health care workers in the United States, and about a million people living in nursing homes.

After lowering expectations for how many millions of vaccines they can produce this year, the companies expect to ramp up their manufacturing early next year. Like with other kinds of vaccines, mass producing them for the coronavirus has proved to be a complex and delicate process requiring sterile conditions and precise control of temperature and humidity. The mRNA technology has also never been commercially manufactured. If other vaccines are also authorized, hundreds of millions of doses could be available by the spring, according to federal officials.

Both Pfizer and Moderna have arranged deals with the government so that the vaccines will be free to Americans and distributed according to plans worked out between the federal government and the states. CVS and Walgreens also have federal deals to begin immunizing nursing home residents. On Tuesday, Alex M. Azar II, the secretary of the Department of Health and Human Services, said that 99 percent of the country’s nursing homes had signed up to be part of the program.

Regulators at the F.D.A. plan to take about three weeks to review Pfizer’s vaccine before an outside panel of experts meets to review the application the second week of December. That meeting has been scheduled for Dec. 10.

The agency typically, though not always, follows the advice of its advisory committees. If committee members reach a consensus about the effectiveness of Pfizer’s vaccine, the company could receive emergency clearance by mid-December.

Because Moderna is also on the verge of submitting its vaccine for review, the outside panel could review the company’s vaccine soon after Pfizer’s.

Pfizer said on Friday that the company has begun rolling submissions in Australia, Canada, Europe, Japan and the United Kingdom, and that it plans to apply in other countries “in the immediate future.”

Inside the F.D.A., Pfizer’s application will be reviewed by the agency’s Center for Biologics Evaluation and Research, which has organized large teams of medical and compliance officers, epidemiologists and statisticians to dig into thousands of pages of data about the safety and effectiveness for each vaccine, as well as information on how companies plan to safely and consistently manufacture large batches of the product.

The process could take longer if the reviewers come across errors, or if they need to ask for additional data. Regulators expect the manufacturing data to spur intense deliberation, as companies have scrambled to turn over that information in time.