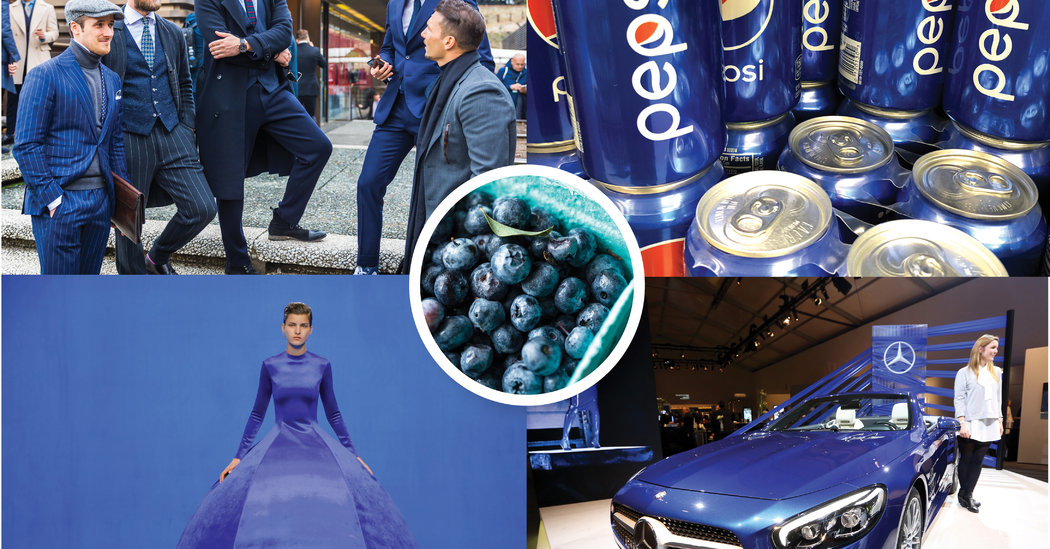 The people at Pantone know that times are hard.

“Many of us,” the color company said in a recent presentation, feel anxious, “completely overloaded and perpetually stressed.” The antidote, according to Pantone’s swatch psychologists? Blue. Specifically: Classic Blue.

For the 21st consecutive year, Pantone has named a color of the year, a trend-forecasting stunt as closely watched by the news media as it is by the industries — marketing, fashion, design — that actually traffic in visual trends.

Classic Blue is the color of blueberries, a Pepsi can and the sky when it’s “that beautiful color at the end of the day,” said Leatrice Eiseman, the executive director of the Pantone Color Institute, which researches and advises companies on human responses to color. In choosing Classic Blue, the organization said it first examined what was going on in the world.

“We’re living in this time now where things seem to be, around the world, a little bit, I don’t want to use the word unstable, but let’s just say a little shaky,” said Laurie Pressman, the vice president of the Pantone Color Institute. “Nothing is absolutely certain from one moment to the next.”

Pantone wouldn’t get too specific about why people feel “shaky.” Political unrest seemed an obvious source of the tremors, but, Ms. Pressman said, “we weren’t looking at this as a political message.” The decision wasn’t about impeachment or the election or Brexit. It also wasn’t a sly endorsement of the blue Democratic Party.

Rather, Pantone has pinned the world’s anxiety and stress on a more common enemy: technology.

“It has sped things up to the point where we can’t necessarily handle all that’s coming in,” Ms. Eiseman said.

Classic Blue “provides a refuge,” according to Pantone, fulfilling a “desire for a dependable, stable foundation.” Classic Blue is “nonaggressive,” “easily relatable” and “honest.”

For the first time, Pantone’s announcement comes with multi-sensory bonuses. The company is releasing music inspired by Classic Blue — an electro-pop track called “Vivid Nostalgia” — as well as a berry tea and velvety fabric. (The music is free; the tea will be available for purchase; custom furniture made with the fabric can be ordered.) Influencers and some journalists were also sent candles and jam.

It’s an escalation in Pantone’s annual publicity push, an already formidable effort. Every December, the announcement is widely covered by national outlets and trade publications (along with any backlash).

The attention has helped make Pantone one of the most influential organizations in color forecasting — an occupation dating back to the early 20th century — said Regina Lee Blaszczyk, a history professor at the University of Leeds and author of “The Color Revolution.”

Pantone wants to stir up excitement about its own brand, and deadline-pressured journalists happily comply, Ms. Blaszczyk said. “You need something that you can write about that’s somewhat exciting. And a celebrity is very exciting.”

Still, Pantone’s predictions have credibility in their accuracy.

The luxury e-commerce platform Moda Operandi analyzes and periodically publishes data on customer behavior. (This data is based on purchases made during its trunk shows or designer collections sold straight from the runway.)

Then again, Ms. Blaszczyk has noticed people in her Weight Watchers Facebook group organize challenges and activities around Pantone colors. For example, she said: “Let’s get dressed up in Pantone Pink this week!”