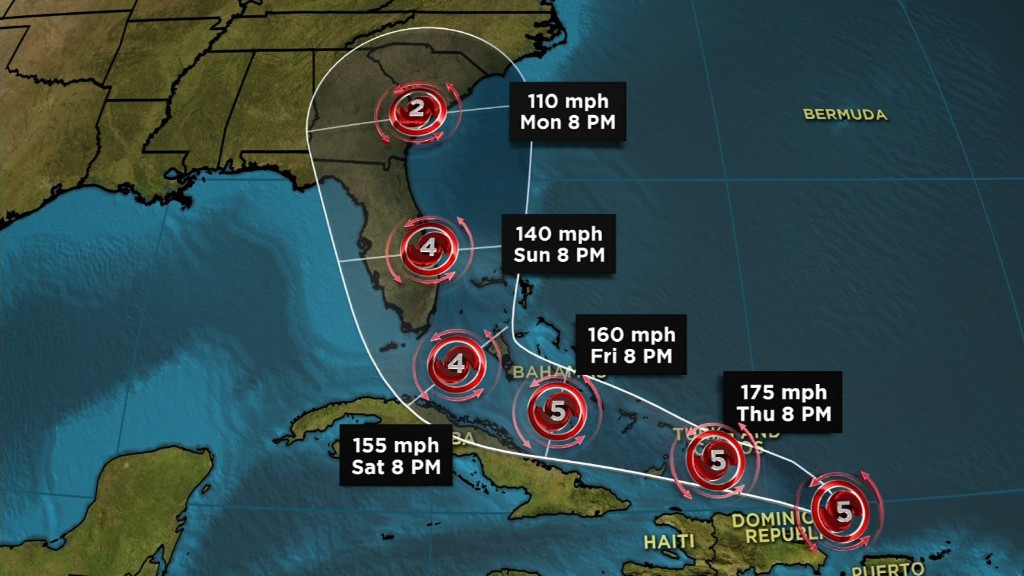 Florida residents racing to get out of Hurricane Irma’s destructive path have encountered a serious obstacle: gasoline shortages.

At least 40% of gas stations in the Miami-Fort Lauderdale region are without fuel, according to estimates from crowdsourcing platform GasBuddy.

About one-third of the gas stations in the West Palm Beach and the Fort Myers-Naples regions are in the same position. Central population centers like Tampa are also being affected, as well as the northern Gainesville region, GasBuddy numbers show.

The shortages have been sparked by a powerful one-two punch to the nation’s energy infrastructure: huge demand from residents fleeing highly-populated regions and refinery disruptions caused by Hurricane Harvey.

“It’s like the church on Easter Sunday getting a tornado warning,” said Tom Kloza, chief oil analyst at the Oil Price Information Service.

Kloza predicted gas shortages will worsen in the coming days as Hurricane Irma — a massive Category 5 storm — as “panic buying” continues and gasoline deliveries are blocked by Florida port shutdowns.

Hurricane Irma’s uncertain path led many of Florida’s 20.6 million residents to stock up on fuel in case the storm’s 180-mile-per-hour winds came their way.

“You had people literally in every county assuming it was going to hit them. As a result, you have shortages in areas that desperately need it,” said James Miller, director of communications for the Florida Petroleum Marketers and Convenience Store Association.

“It’s hard to blame people because the storm is quite scary,” Miller said.

Sebastian, Florida resident Michele Williams told CNNMoney she encountered at least five gas stations that were empty when she drove her daughter home after her college in Sarasota was evacuated.

“It was pretty scary,” Williams said of her three-hour drive across the state.

“Some of my friends evacuating are having problems going up (Interstate) 95 because they aren’t able to get gas,” she said.

Florida Governor Rick Scott pleaded with residents not to consume more gasoline than they need.

“Be considerate of neighbors and take only what each family needs to be prepared,” Scott said in a statement on Wednesday.

State officials said Florida is moving as much fuel through the system as possible and emergency fuel contractors have secured 1.5 million gallon of fuel for initial delivery. The state is also working to have additional fuel supply on standby for future deliveries.

Unfortunately, gasoline shortages may get worse before they get better. Miller said Florida gets 97% of its gasoline from waterways — and Hurricane Irma is likely to shut down key ports very soon.

“Motorists are consuming everything that is being delivered. Supply could be very touch and go,” said Patrick DeHaan, senior petroleum analyst at GasBuddy.

Florida’s problems have been exacerbated by Hurricane Harvey’s disruptions to Gulf Coast refineries, which Florida relies on for gasoline shipments. While some refineries shut down by Harvey are resuming operations, roughly 12% of total U.S. refining capacity is still offline, according to S&P Global Platts.

Florida residents who do find gas are paying more due to Harvey. A gallon of gasoline sold for $2.72 on Thursday in Florida, compared with $2.40 a week ago, according to AAA.

The supply disruptions to Florida were especially harmful because the state typically uses what it gets almost right away. Kloza estimates Florida operates with just seven days of gasoline supplies, a third less than the country as a whole.

“That’s not enough when people know this storm is coming and they all fill up their tanks at once,” he said.