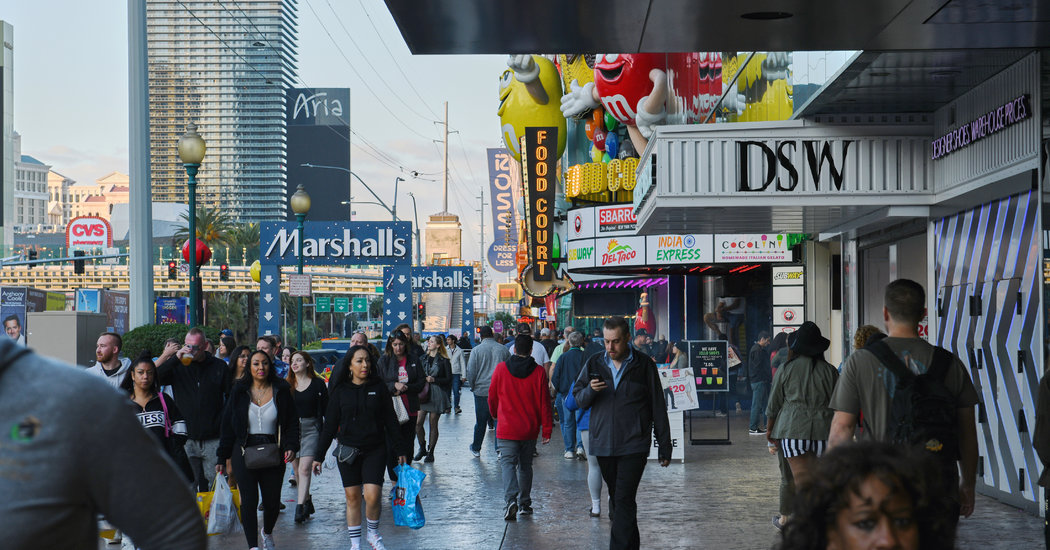 Five years ago, Eli Gindi, a New York businessman, learned that part of the Showcase Mall on the Las Vegas Strip was up for sale. His interest piqued, he informally toured the property a few weeks later while in town for business.

Until then, Las Vegas had not been on Mr. Gindi’s investment radar. That changed during his trip. A mass of humanity crowded into stores for Coca-Cola, M&M’s and Adidas, as well as souvenir shops, T-shirt vendors, tour booths, tattoo parlors and peddlers of giant margaritas. A time-share salesman told Mr. Gindi that he paid $50,000 a month to rent a table at the mall.

When his business associates wanted to leave the mall, he hesitated. “I said, ‘I’m not leaving until I buy this,’” said Mr. Gindi, a co-founder of Gindi Capital, which invests in real estate, retailing and other assets. “I had never seen an opportunity like it.”

His timing could not have been better. Over the last few years, retailers have been clamoring for storefront space along the Strip, hoping to capture the attention of some 42 million global visitors annually by providing one-of-a-kind experiences.

It is a departure from the Strip’s primary retailing model of containing stores and restaurants inside casinos, a trend that the Simon Property Group established nearly 30 years ago with the development of the wildly successful Forum Shops at Caesars Palace.

“In the past, the safest bet was to be in the casino, because that’s where the traffic was and having that identity with the casino made sense,” said Zack Hussain, a senior associate with CBRE in Las Vegas. “But today, street-front retail is thought to be best, and the biggest challenge on the Strip is meeting the demand for space. We’re starting to see some gentrification of street-front properties.”

Since paying $145 million for part of the Showcase Mall four years ago, Gindi Capital has acquired the rest of it and nearby properties to control some 2,000 feet of frontage on Las Vegas Boulevard South between West Tropicana and East Harmon Avenues. Gindi Capital completed its fifth and latest acquisition on the block this year, paying $172 million for 9.5 acres, where it intends to develop a 300,000-square-foot shopping, dining and entertainment project.

Mr. Gindi said he had bought out several tenants to make way for American Eagle and T-Mobile stores, as well as Designer Shoe Warehouse. The first Burlington and Target stores on the Strip are under construction north of the Showcase Mall on the former site of a Smith & Wollensky steakhouse, which Gindi Capital bought in 2017. FlyOver Las Vegas, a virtual reality experience, will open in a closed movie theater in 2021 after a makeover costing some $35 million, he said.

Demand for Las Vegas retail space stands in contrast to most markets in the United States, even along traditional high-traffic streets. Many retailers are struggling to adapt to market changes, including the growth of e-commerce, the decline of large department stores and a growing preference for engaging experiences that transcend the routine shopping trip.

The liquidation of Barneys New York is the latest in a number of recent retailer capitulations, which include the closing of Gap, Tommy Hilfiger, Lord & Taylor and Polo Ralph Lauren stores in New York, for example. Failing retailers have closed stores in Las Vegas, too, but many brands, including Louis Vuitton, Chanel and Tiffany, still occupy multiple locations in casinos along the Strip, Mr. Hussain said.

Mr. Gindi attributes some of the consequences in New York to a surge in lease rates — Barneys’ rent roughly doubled to $30 million for its 275,000-square-store flagship on Madison Avenue — but he expects that corridors like Madison and Fifth Avenues will overcome their retail challenges when rates decline. Still, among the differences that set the Strip apart from other well-known high streets, rent is one.

The Strip has only about one-third of the annual traffic of Times Square, said Michael Hirschfeld, vice chairman of Jones Lang LaSalle in New York. But average costs to lease space on the Strip are $250 to $300 per square foot, compared with $1,500 to $1,800 for prime Times Square space, he added. He also pointed out that New York residents and office workers make up a sizable portion of the daily pedestrian traffic along Manhattan’s retail streets.

“In Las Vegas, the population changes every three and a half days, and people come from all over the world,” said Mr. Hirschfeld, who is working with Mr. Gindi on his Las Vegas project. “These are people who want to be in a fun environment and who want to experience and do things that they can’t do when they go back home to St. Louis or Léon, France.”

He added: “A lot of retail is evolving to what Vegas already is.”

The focus on retailing along the Strip coincides with a smaller emphasis on gambling among younger generations, which have gravitated toward other forms of experience-based entertainment. The share of gambling revenue on the Strip has declined for 35 years, dropping to 34.3 percent in 2018 from 58.6 percent in 1984, according to the Center for Gaming Research at the University of Nevada, Las Vegas. Over the same period, food, beverage, retail and entertainment spending rose to almost 38 percent from 25.2 percent.

Recognizing this change, casinos in recent years have created outdoor entertainment districts to leverage Strip traffic, including Park MGM, an MGM Resorts development across the street from the Showcase Mall. Last December, the Italian food hall and marketplace Eataly opened its sixth United States location in Park MGM, and sales have matched those of its other operations despite the store’s slightly smaller size, said Nicola Farinetti, Eataly’s chief executive.

“We quickly understood that Eataly would be a great fit for the Vegas market because we cater toward both the gastronomic and entertainment aspects of the city,” he said. “We’ve had to learn to accommodate so many guests at once after concerts, shows and other happenings in the area, but that has been the fun of it.”

Similarly, many retailers and restaurant operators are opening flagships — destination outlets with prominent, modern features — along the Strip to provide services, merchandise and experiences that shoppers can find only in select markets. American Eagle’s two-story anchor store on the Showcase Mall’s southern end, for example, allows customers to personalize their clothing in the store and is wrapped in digital awnings that advertise the brand 24 hours a day.

American Eagle already operates in the Fashion Show Mall on the northern end of the Strip, but that store serves primarily local customers, said Andrew McLean, chief commercial officer for the retailer’s parent company, American Eagle Outfitters. It opened the Showcase Mall store to cater to a broader customer base, he added. Aerie, the retailer’s intimate apparel brand, also opened on two floors at the property.

“As we looked at our detailed analysis, it became apparent that this was an opportunity that was just too good to pass on,” Mr. McLean said. “It presents our brands to their fullest potential and creates a strong experience that customers carry home.”

Mr. Gindi is hunting for about a dozen more stores to occupy his next shopping, dining and entertainment development on the block, which he hopes to begin building in 2020 and open two years later.

“The Strip is evolving, and we’re upgrading tenants with a lot more national retailers,” he said. “When you think of Las Vegas, you think of the Strip, and people want to be part of that.”