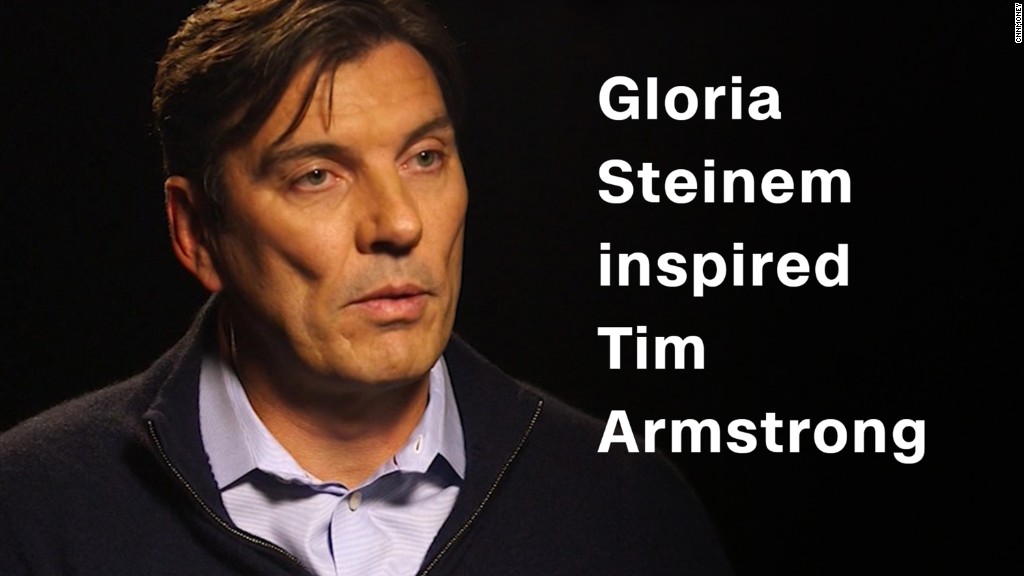 Oath CEO Tim Armstrong says he is on a mission to fill at least half of the leadership positions at the company with women by 2020.

“We’re roughly in the 30% range right now,” Armstrong says in a new episode of CNN’s Boss Files with Poppy Harlow. “I think to get there it requires us to promote from internally, hire from the outside obviously, and then in some cases, for us to create new positions in areas where we’re going to go into the new business we’re going to have new areas that women can lead.”

Oath, the newly merged company formed out of the merger of AOL and Yahoo, is owned by Verizon (VZ, Tech30) and manages media brands like AOL, Huffington Post, Yahoo, TechCruch, and Tumblr.

Oath says they have not yet released their diversity report.

“Having more women leaders is actually an enhancement for the entire corporation,” Armstrong says.

“I think every piece of data you see says having a more diverse workforce and having more women involved in it actually leads to better outcomes, better growth,” he says.

According to a report from consulting firm McKinsey, companies in the top quartile for gender diversity are 15% more likely to outperform financially in their industry.

Armstrong says changes to the “behavior of the company, or the behavior of individuals” are key to gender parity in the workplace.

Related: Women do ask for pay raises, they just don’t get them

One example: asking for raises. “If you have a woman and a man come into a business and over the next five years the man is more aggressive asking for a raise each year, and the women are less aggressive, over time… you start with an immediate gap,” he says.

Armstrong’s commitment to elevating women in the workplace came from “five or six years of understanding the space,” he says. In 2012, as AOL’s CEO, Armstrong launched Makers, a digital platform with original videos and interviews of trailblazing women, including Ruth Bader Ginsburg and Oprah Winfrey. Armstrong says AOL has put its “largest investment” into this brand.

The idea was sparked after his daughter met former Xerox CEO Ursula Burns while the family was on vacation. Armstrong recalls his daughter putting Burns’ signed autograph over her desk in her bedroom.

“It struck me that I had just walked ten steps down the hall, but my son — who I love — may actually end up earning more and having a better opportunity only because he was male, and my two daughters, ten feet down the hall may have not had the same opportunity,” he says.

Armstrong’s initial plan was to launch a separate company in which “all leadership, all people who work for the company [would be] women.”

But after a conversation with actress Marlo Thomas and writer and feminist organizer Gloria Steinem, he changed course.

“Gloria Steinem said, ‘Tim that’s the opposite of what we need. We need somebody like you in your position to essentially take more risk inside of your own ecosystem. And by the way, companies perform better when there’s men and women so don’t think about women-only, think about how to combine that,'” Armstrong recalls.

Armstrong’s mission comes at a time when the tech sector is grappling with rampant sexual harassment.

When asked about the controversial memo by Google engineer James Damore that argued that women are less biologically fit than men for leadership roles in tech, Armstrong says, “I don’t believe it. I don’t see it.”

“If you take the time to understand what someone’s superpower is, it doesn’t matter if they’re male or female. And we have great examples of super power women engineers and product people at our company,” he says.

Armstrong says he realizes his goal of parity of men and women in leadership at Oath by 2020 is going to be difficult to reach.