“Lowball” might be too harsh of a word, but the Nordstrom (NYSE: JWN) board of directors left no doubt they were less than impressed with the Nordstrom family’s $50 per share bid to take the retailer private. Not only did the board reject the offer as “inadequate”, but it told the family to “promptly and substantially” raise the bid and do it soon, or the board would terminate discussions.

And for good measure, it also said it would stop providing the family with due diligence information. To say they were unhappy with the Nordstrom family wasting their time would be an understatement.

The family contends the $50 per share bid represents a 24% premium to the retailer’s closing share price on June 7, the day before the Nordstroms announced they were forming a special committee to look into taking the company private.

While it’s true the potential for a premium to be paid in a takeover transaction or go-private deal will raise the stock, retailers generally and department stores in particular have seen their values rise over the last nine months as the threat of a retail apocalypse subsided. While Nordstrom’s stock is up about 25% since that day, shares of Macy’s are 37% higher, and Kohl’s stock is up 77%. Only J.C. Penney has seen its stock tumble. 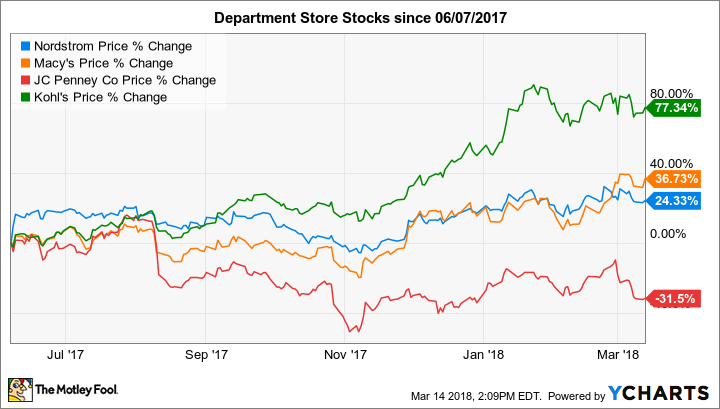 The board apparently feels that Nordstrom’s share price would have been higher regardless. In its fourth-quarter earnings report released on Mar. 1, the retailer said net sales rose 8.4%, and comps were 2.6% higher, showing improvements at its full-line stores, while the off-price Nordstrom Rack brand continued to rack up gains.

For the year, sales increased 4.4% on a 0.8% rise in comps, both ahead of management’s projections while also underscoring the board’s contention that Nordstrom’s situation was improving and warrants a higher buyout price.

Only way out is up

The apparent acrimony between the special committee of the board evaluating the go-private offer and the Nordstrom family should make for interesting board meetings down the road — the family members pursuing the buyout include Nordstrom’s top executives like co-presidents Blake Nordstrom, Peter Nordstrom, and Erik Nordstrom; stores president James Nordstrom; chairman emeritus Bruce Nordstrom; and Anne Gittinger, the granddaughter of Nordstrom co-founder John W. Nordstrom.

Although the board of directors didn’t specify what they thought an appropriate price for Nordstrom would be, Bloomberg reports Smead Capital Management says the retailer’s future still looks promising, and it would need at least $60 to think about a deal. Others have said it might require a bid as high as $70, while analysts at Cowen & Co. previously thought a low $50s price would be appropriate. However, the board’s call for a “substantial” bid revision makes that seem unrealistic at this point.

What has also happened now is the Nordstrom family has set a floor on offers from potential outside bidders. While there was always the possibility of someone stepping forward with an offer from the time the go-private deal was announced, now that it’s known what the board won’t accept, others might be tempted to make their own offers.

Shares of Nordstrom have fallen back to the $50 share price offered by the Nordstrom family, but they could still rally higher if the family or someone else shows interest in the retailer. By coming in with an offer that was too low, though, the Nordstrom family may have invited a bidding war that could end up pricing them out of the deal.

10 stocks we like better than Nordstrom
When investing geniuses David and Tom Gardner have a stock tip, it can pay to listen. After all, the newsletter they have run for over a decade, Motley Fool Stock Advisor , has tripled the market.*

David and Tom just revealed what they believe are the 10 best stocks for investors to buy right now… and Nordstrom wasn’t one of them! That’s right — they think these 10 stocks are even better buys.