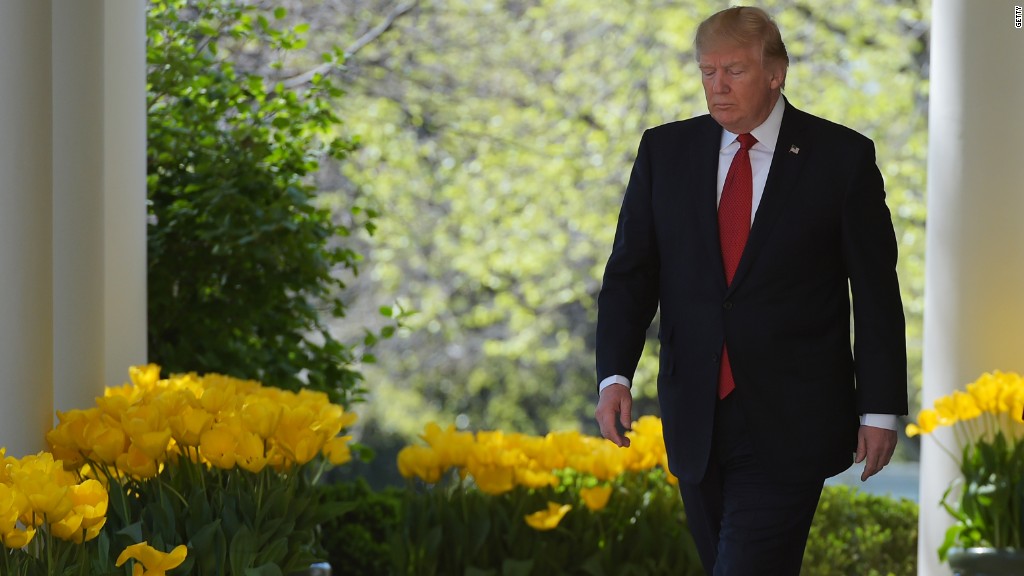 Instead of selling Americans on the GOP’s health care bill, President Trump is selling resentment of the media.

The President is telling people not to believe the journalists who are reporting on the bill. Meanwhile, he is declining to give interviews about health care or any other subject.

On Tuesday his main target was CNN. Trump reveled in the fact that three CNN journalists resigned on Monday after their Russia-related story was retracted.

On Wednesday Trump went after two of the nation’s biggest newspapers, The New York Times and the Washington Post.

He mangled the facts several times, but his overall message came through loud and clear: Do not trust the people who are trying to hold my administration accountable.

Wednesday’s anti-media tweets probably came about because the President awoke to find an unflattering story on the front page of The Times.

“The failing @nytimes writes false story after false story about me,” Trump tweeted shortly before 7 a.m. “They don’t even call to verify the facts of a story. A Fake News Joke!”

Almost ten minutes later, Trump removed virtually all doubt over which story had drawn his ire. “Some of the Fake News Media likes to say that I am not totally engaged in healthcare,” he said in his subsequent tweet. “Wrong, I know the subject well & want victory for U.S.”

Appearing on page one of the Times on Wednesday morning was a story depicting Trump as detached from the Republican effort to overhaul health care.

The Times said Trump was wrong.

Jonathan Martin, one of the co-authors of the Times story, said on Twitter that he anticipated Trump’s defensive reaction.

“One leading Trumper admitted this was his fear about our story: that Trump would go ballistic in [a.m.] when he saw,” Martin said.

One leading Trumper admitted this was his fear about our story: that Trump would go ballistic in am when he saw https://t.co/zVqBNdqU7q

Later in the morning, Trump also lambasted the Post, which published a story on Tuesday saying that “a Time magazine with Trump on the cover hangs in his golf clubs. It’s fake.” Time subsequently asked the Trump Organization to remove the Photoshopped covers.

Trump’s anti-Post tweet referenced its ownership by Jeff Bezos, the CEO of Amazon.

Trump falsely tied the two companies together by calling them “#AmazonWashingtonPost.”

The Post’s Philip Rucker responded, “Just a quick fact check for anyone curious: Wash Post is not a part of Amazon. It is owned privately by Jeff Bezos.”

Trump’s ever-active Twitter feed often provides a window into his media consumption. He also retweeted a story on Tuesday that was blasted out by “Fox & Friends,” the Fox News morning show that strenuously defends the Trump administration.

Judging by the president’s tweets, he is more interested in “fake news” than the fate of the health care bill — though he did tweet Tuesday, “I just finished a great meeting with the Republican Senators concerning HealthCare. They really want to get it right, unlike OCare!”

Ratings for Fox News, MSNBC and CNN are all significantly up this year.

On Tuesday some of Trump’s aides and family members went even further than the president. Deputy press secretary Sarah Huckabee Sanders promoted an anti-CNN tape by conservative provocateur James O’Keefe even while admitting she didn’t know if it was “accurate or not.”

Trump’s war with the media has been one of the defining characteristics of his first five months in office. It is unprecedented in scope in severity.

Some of his supporters see it as a show of strength, while critics say it’s a sign of weakness on the part of the White House.

The president has not held a solo press conference in over four months. He has not granted any interviews to non-Fox news outlets in a month and a half.

His press office has drastically scaled back the number of press briefings that it holds on-camera. Other government agencies have also reduced press access.