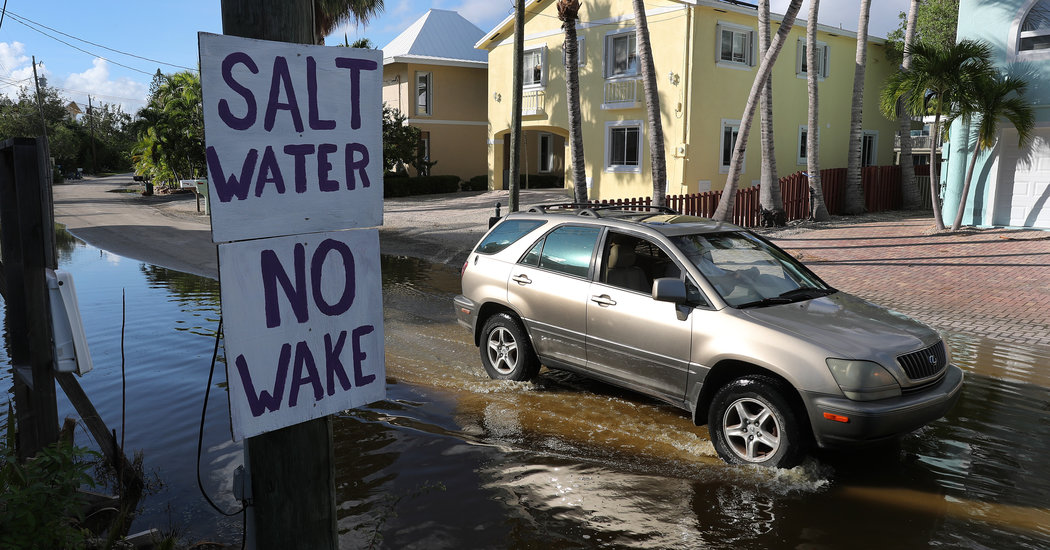 The increase in high-tide flooding along the Atlantic and Gulf Coasts since 2000 has been “extraordinary,” the National Oceanic and Atmospheric Administration reported, with the frequency of flooding in some cities growing fivefold during that time. That shift is damaging homes, imperiling the safety of drinking water, inundating roads and otherwise hurting coastal communities, the agency said.

“Conditions are changing, and not just in a few locations,” Nicole LeBoeuf, acting assistant administrator for NOAA’s National Ocean Service, which compiled the report, said during a call with reporters. “Damaging floods that decades ago happened only during a storm now happen more regularly, even without severe weather.”

NOAA defines high-tide flooding, also called sunny-day or nuisance flooding, as water rising more than half a meter, or about 20 inches, above the normal daily high-tide mark. The frequency of that flooding has increased because of rising sea levels, which were roughly 13 inches higher nationally last year than in 1920, the agency reported.

The number of days with high-tide flooding set or tied records in 19 places around the country last year, including Corpus Christi, Texas, which recorded 18 days of flooding; Galveston, Texas (18 days); Annapolis, Md. (18 days); and Charleston, S.C. (13 days). The place with the greatest number of recorded flood days was Eagle Point, Texas, in Galveston Bay; it reported high-tide flooding on 64 days, or almost one day out of five.

Those numbers represent huge jumps in a short period of time. In 2000, Corpus Christi had just three days of tidal flooding; Charleston had just two. The report notes that Charleston recorded just 13 days of high-tide flooding in the more than 50 years that measurements were first kept — the same number that occurred last year alone.

That trend is likely to accelerate, the agency said. By 2030, NOAA projected, the frequency of high-tide flooding could double or triple. By 2050, it said, that number could be five to 15 times as great, with the typical coastal community flooding between 25 and 75 days a year.

“You see where this is going,” Ms. LeBoeuf said. “We all need to pay attention.”

The new data come as the Trump administration continues to play down the threat of global warming, which is the driving factor behind sea-level rise. President Trump is pulling the United States out of the Paris climate accord, and his officials have cited the coronavirus pandemic in efforts to weaken crucial environmental provisions. In a separate report Tuesday, a government watchdog found that his administration was understating the cost of climate change in its regulations.

Still, the agency has mostly been allowed to continue gathering and releasing data showing the effects of climate change. Tuesday’s report opened with what amounted to a warning: “Sea level rise flooding of U.S. coastlines is happening now, and it is becoming more frequent each year.”

Yet the report was silent on the cause of rising seas, containing no mention of climate change or global warming.

“Climate change and carbon emissions are a factor at play when we look at how tides are rising,” Ms. LeBoeuf acknowledged in the call with reporters, adding the paper had not been reviewed or edited by political officials. But she emphasized that the report, strictly speaking, was limited to data collected from the tide gauges.

The question of what is causing seas to rise is, she said, “a little different.”