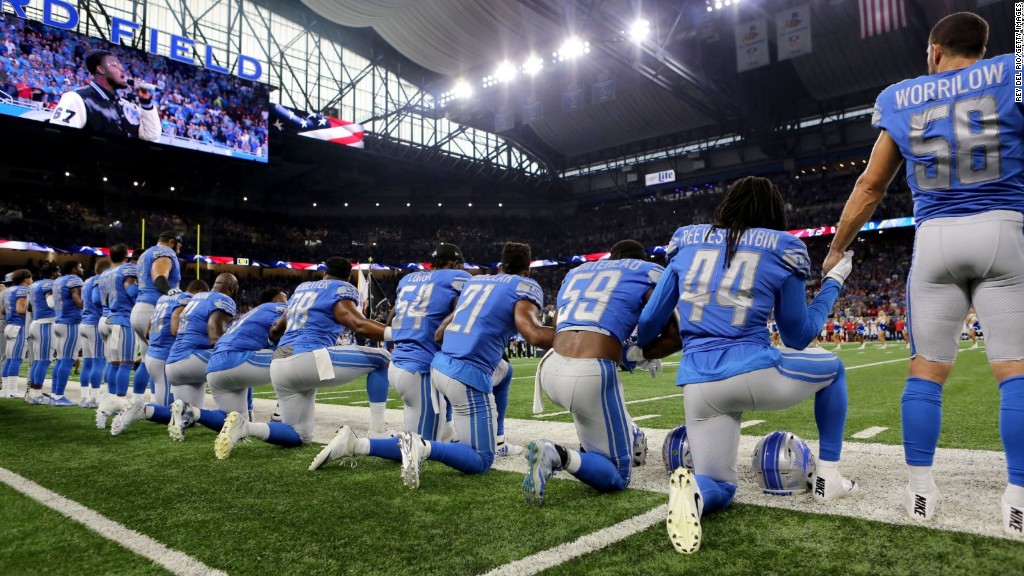 NASCAR said it respects both the national anthem and that the U.S. Constitution protects the right to free speech.

The anthem has elicited strong reactions throughout the sports world.

In the NFL, the WNBA, MLB and even in the world of pro tennis, athletes have taken a knee during the performance of the Star-Spangled Banner at sporting events in a gesture first used by Colin Kaepernick. The former 49ers quarterback began kneeling in 2016 as a way to protest the treatment of black Americans, especially by police.

The issue came to a head after President Donald Trump said that NFL owners should fire anyone who protests the anthem. He said anyone who does protest is a “son of a bitch.”

After more NFL players joined the protest on Sunday, Trump tweeted that he was “so proud of NASCAR” because it did not “put up with disrespecting our Country or our Flag – they said it loud and clear!”

So proud of NASCAR and its supporters and fans. They won’t put up with disrespecting our Country or our Flag – they said it loud and clear!

On Monday, NASCAR released a statement in which it said it respects the national anthem and that it’s “always been a hallmark of our pre-race events.”

It also acknowledged the right to free speech and peaceful protest.

“Thanks to the sacrifices of many, we live in a country of unparalleled freedoms and countless liberties, including the right to peacefully express one’s opinion,” the statement said.

It noted that “sports are a unifying influence in our society, bringing people of differing backgrounds and beliefs together.”

Related: NFL: No fines for teams that skipped national anthem

Team owner Richard Childress said that if any of his employees protested he would tell them “get you a ride on a Greyhound bus when the national anthem is over.”

He said he told them “anyone who works for me should respect the country we live in. So many people gave their lives for it. This is America.”

“Anybody that don’t stand up for that ought to be out of the country. Period,” Petty told USA Today. “If they don’t appreciate where they’re at … what got them where they’re at? The United States.”

Richard Petty Motorsports said it did not have an official comment.

Compared with other sports leagues, NASCAR has less racial diversity among fans and drivers. However, driver Dale Earnhardt Jr. tweeted a message of support for peaceful protests on Monday.

He tweeted a quote attributed to President John F. Kennedy about how all Americans have the right to peacefully protest and that anyone who makes “peaceful revolution impossible” will “make violent revolution inevitable.”