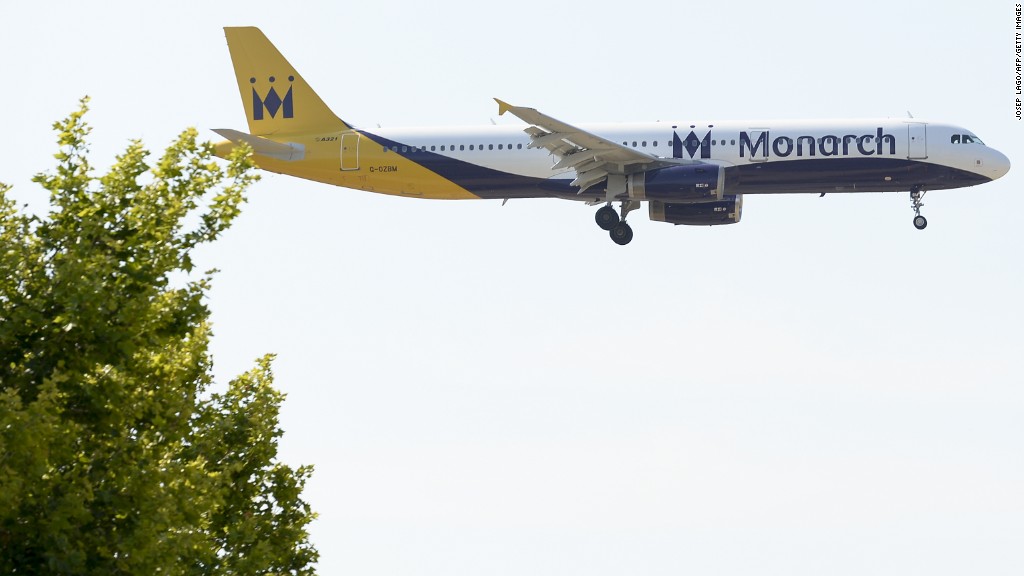 Katie Ode was looking forward to a week of vacation in Spain, a chance for some “sunshine instead of the rain all the time.”

Instead, she got a nasty shock as she arrived at the airport at around 4 a.m. on Monday after a long drive from home. Her airline, Monarch, messaged her to say it had “stopped operating” and directed her towards its website.

“I thought it was a fake text because the website wasn’t working,” Ode told CNNMoney.

Ode is one of 860,000 Monarch customers left high and dry after the U.K. carrier went into administration and canceled all its flights on Monday morning.

“Since then I’ve had no communication at all, so I’m going to try about 8:00 when they open and hope for the best,” she said. “At the moment, I’m completely in the dark.”

Ode, who works as an assistant manager at a betting shop, said she stands to lose around £750 ($1000) if she’s unable to change or cancel her bookings.

“I just feel annoyed more than anything, because they knew about it and they didn’t bother telling us in advance,” she said.

Monarch had been under enormous financial pressure from rising costs, low demand on some routes because of terrorism fears, as well as a drop in the value of the pound, according to accounting firm KPMG.

About 110,000 U.K.-based Monarch customers are stranded overseas and need to be brought back. The biggest airline collapse in U.K. history also affects 750,000 people booked on future flights or holidays.

“Thanks Monarch – that’s our Christmas holiday stuffed. Wonder how long it will take to get our money back,” one Twitter user wrote.

Hello @Monarch in Ibiza now with no updates from the airport supposed to fly in 2 hours what’s going on?

Customers who booked flights on or before Dec. 14, 2016 are eligible for the government’s ATOL insurance scheme, as are those who booked holiday packages with Monarch’s tour group subsidiary.

Others will have to rely on insurance provided by their credit card companies, or negotiate directly with the travel agents that handled their booking, the U.K. Civil Aviation Authority (CAA) said.

“We’re already in conversation with credit card companies,” U.K. Transport Minister Chris Grayling said on Monday. “Our goal is to get as much money as possible back for the taxpayer.”

Steve Carey, 56, flew to Turkey on Monarch Airlines two days ago for a two-week holiday, but is now unsure how he and his wife will make it back to the U.K. on Oct. 14.

Both of them start new jobs two days after their return, he said, and two friends who were due to join them in Turkey are now stuck.

Carey questioned why Monarch was still accepting bookings when they knew they were in dire financial straits.

“They got into trouble two years ago,” he said. “They should have known.”

Carey said a Monarch representative arrived at the Turkish resort he is staying at and told customers who had booked holidays with the company that they would have to pay for their own hotel stay.

Carey said he booked his holiday through a travel agency, but described other Monarch customers at the resort as “in tears and refusing to pay.”

The CAA is arranging return flights for Britons stranded abroad at no extra cost, as long as they are traveling on or before Oct. 15. Details of those flights will be shared with passengers at least 48 hours before their Monarch flight was due to depart, it said.

“[It’s] a long wait with lots of worrying,” Carey said, adding that he would “try to look on the bright side but prepare for the worst.”

Vacationing passengers weren’t the only ones left in the lurch — Monarch currently employs 2,100 people, many of whom may find themselves out of a job.

Several Twitter users appearing to be employees of the airline reacted with shock and sadness online.

When you wake up to the news that the wife has lost her job! #monarch 😩