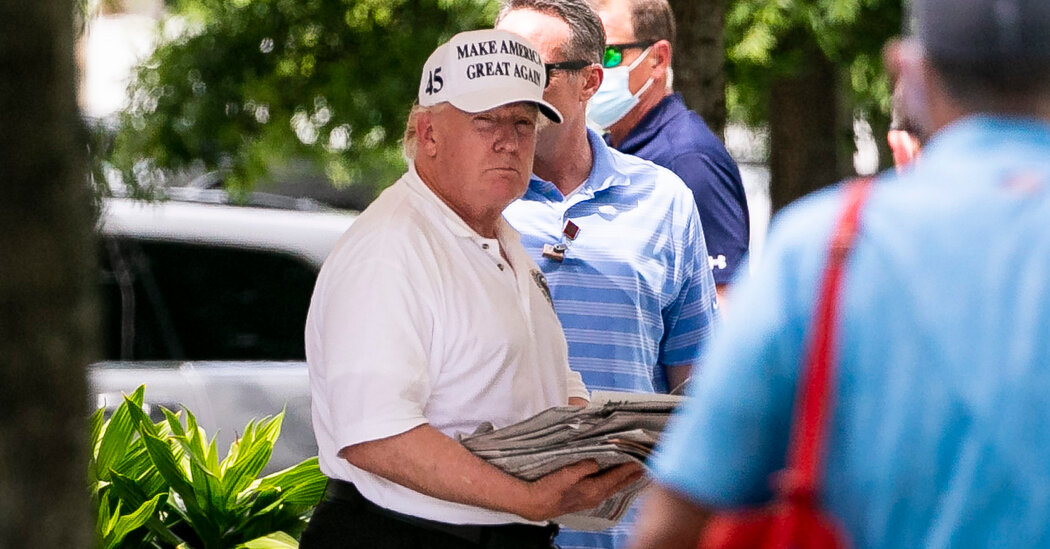 Microsoft said on Sunday that it would continue to pursue the purchase of TikTok in the United States after consulting with President Trump, clearing the way for a potential blockbuster deal between the software giant and the viral social media phenomenon.

The announcement came as Mr. Trump has expressed repeated concerns about TikTok and concerns around national security in recent weeks; on Friday, Mr. Trump threatened to ban the app entirely within the United States.

Those plans appeared to change after Satya Nadella, the chief executive of Microsoft, spoke over the weekend with the president, assuaging his worries over the safety of the app.

“Microsoft fully appreciates the importance of addressing the president’s concerns,” the company said in a statement. “It is committed to acquiring TikTok subject to a complete security review and providing proper economic benefits to the United States, including the United States Treasury.”

Microsoft said it would pursue the deal over the coming weeks, and expected to complete the discussions no later than Sept. 15. Such a deal would involve purchasing TikTok offices in the United States, Canada, Australia and New Zealand; ByteDance, the parent company of TikTok, would continue to own the social media app’s offices in Beijing. Microsoft may also bring on a series of outside investors, which would hold minority stakes in any deal.

Tensions among Republican lawmakers, business and the administration spilled into the open over the weekend as Washington awaited a decision from Mr. Trump.

Such a move would have been the latest in a series of punitive actions the Trump administration has taken against China, which the president blames for allowing the coronavirus pandemic to spread and damage the American economy, diminishing his re-election chances. As the election nears, Mr. Trump has increasingly challenged China over security, technology and commercial relations in an attempt to persuade voters that he will be tougher in taking on Beijing than former Vice President Joseph R. Biden Jr.

But a ban on TikTok, which could target its presence in the Apple and Google app stores, would have come with other difficulties, including irking millions of young Americans who share viral videos and dance clips on the service. It also most likely would have prompted legal challenges, angered prominent Republican lawmakers and dismayed the business community.

Several prominent lawmakers and business leaders over the weekend defended Microsoft’s proposed purchase, in a bid to sway the president.

“I was among the first to warn of danger posed by TikTok last year,” Senator Marco Rubio, Republican of Florida, wrote on Twitter on Sunday. “As I have shared with POTUS & @WhiteHouse if the company & data can be purchased & secured by a trusted U.S. company that would be a positive & acceptable outcome.”

Senator Lindsey Graham, Republican of South Carolina, also underlined his concerns with the app’s security, tweeting on Saturday, “President Trump is right to want to make sure that the Chinese Communist Party doesn’t own TikTok and most importantly — all of your private data.”

He added: “What’s the right answer? Have an American company like Microsoft take over TikTok. Win-win. Keeps competition alive and data out of the hands of the Chinese Communist Party.”

Myron Brilliant, the executive vice president of the U.S. Chamber of Commerce, tweeted Sunday that a sale would “be a good solution that helps to address some security concerns, strengthens the US #digitaleconomy, and preserves an app enjoyed by millions of Americans.”

Some of Mr. Trump’s closest political advisers, including Treasury Secretary Steven Mnuchin and Larry Kudlow, the chief of the National Economic Council, had urged the president to allow a sale of TikTok.

On Friday, one senior administration official said the main objection raised internally was Chinese ownership of TikTok. He said he could not explain why there would be objections to any American owner, including Microsoft, as long as the data was stored outside China, and did not run across Chinese switches. Microsoft has a close relationship with the U.S. government, winning a $10 billion cloud computing contract to help modernize the Pentagon last year.

But other administration officials, including some of Mr. Trump’s most hawkish advisers, objected to TikTok’s sale, seeing the moment as an opportunity to push through more expansive measures that could curtail the influence of Chinese apps more broadly.

Speaking on Fox News on Saturday night, Peter Navarro, the White House trade adviser and a noted China critic, criticized the attempted acquisition by Microsoft, saying that Microsoft was “the software that the People’s Liberation Army and Chinese government run on” and that Microsoft helped China build its Great Firewall.

“What this president and the White House is going to be doing is look at any kind of software that sends the information for Americans back to servers in China,” Mr. Navarro said. “They’re going to come under scrutiny.”