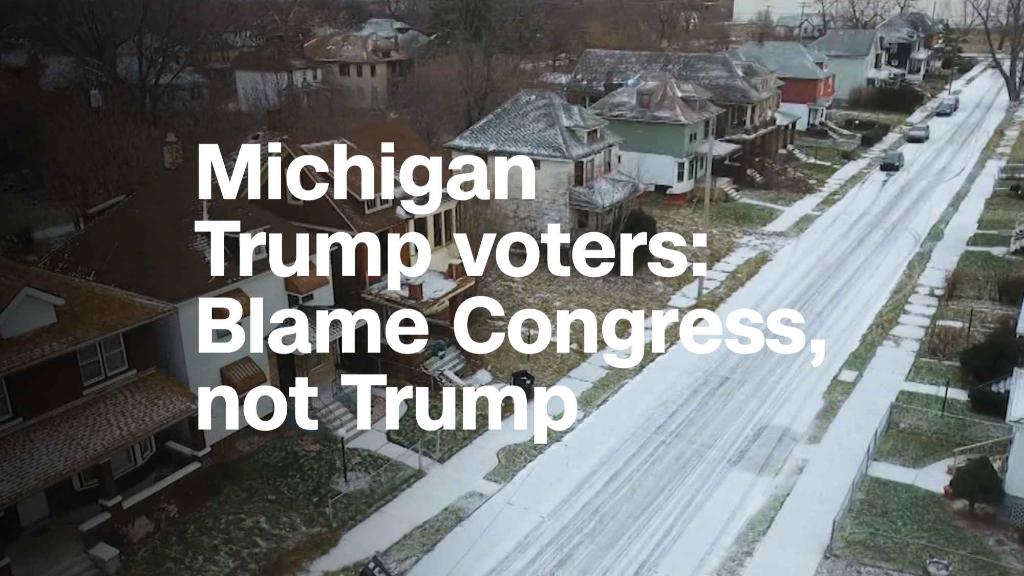 One year after Donald Trump flipped Michigan from a blue state to a red one, many voters CNN spoke with say they would make the same decision today. They credit Trump for the strong economy — and believe he can accomplish more if Congress would be more cooperative.

Right after he took office, we asked Trump voters across Michigan which of the president’s campaign pledges they most wanted him to accomplish. At the top of their lists were jobs, wages, health care and taxes and the North American Free Trade Agreement.

While many acknowledged that little progress has been made on several of those fronts, they still say the president has helped the economy. They point to things like the tight labor market. Michigan’s unemployment rate is now at 4.5% — just slightly above the national average of 4.1%, according to the U.S. Bureau of Labor Statistics. A year ago, the state’s unemployment rate was 5%.

And almost every Trump voter we spoke with gave him credit for the soaring stock market — even though few of them had any money invested.

Here’s how some of the voters we spoke with graded the president’s performance thus far.

Sal Moceri considers himself a lifelong Democrat. That is until 2016, when he voted for Trump. He voted Republican largely, he says, because of Trump’s promise to renegotiate NAFTA.

A United Automobile Workers union member, Moceri makes about $30 an hour fixing parts at a Ford plant. His 42 years at Ford have enabled him to send his four kids to college and live a comfortable life, but he worries for other workers just coming into the industry.

Earlier this year, Moceri told us he believed NAFTA hurts wages and makes it impossible for workers to realize the American Dream.

Related: NAFTA talks are in trouble

“[NAFTA] was the downfall of most of the American [auto] industry,” he said.

But not all manufacturing job losses can be blamed on NAFTA. Between 2000 and 2010, about 87% of the jobs lost in the industry came from factories turning to automation and new technologies in order to improve efficiency, according to a study by two Ball State University professors.

That hasn’t deterred Moceri. He is confident NAFTA will be renegotiated and it will turn things around.

Trump is trying, he says, and he isn’t entirely to blame. “He’s not doing well, but he’s not a politician,” says Moceri, noting that Trump is still learning how to get things done in Washington.

His grades: “A for effort, B for accomplishments, C for candor”

Just a few years ago, Ricky Quinn was an engineer at an automaker earning $40 an hour. But then he got laid off. Now he’s a security guard making $14 an hour — the best paying job he can find, he says. Quinn’s wife has a series of medical problems and can’t hold a full-time job right now.

Their health care is covered through the pension he receives from the automaker he used to work for. About $600 a month is taken out of his pension for that coverage, and he pays an extra $400 a month to cover he and his wife’s other medical expenses.

Quinn doesn’t rely on Obamacare for health care, but he says he voted for Trump based on his promise to repeal and replace President Obama’s signature health care legislation. Quinn was opposed to the individual mandate, which requires everyone to have health coverage or pay a penalty, and he was counting on Trump being able to lower the overall cost of health care. One Obamacare policy he says he’d like to see remain is the mandate to cover of pre-existing conditions.

Related: In this small Kentucky town, they aren’t waiting on Washington

But Quinn doesn’t blame Trump for not being able to get health care reform done this year. Quinn blames Congress instead and wishes Senate Majority Leader Mitch McConnell would provide more support to the president.

“I know it’s going to sound like I’m just a 100% Trump guy. It’s not the case. I really don’t think it was his fault,” he says. “If [Trump] didn’t have so many people working against him from the right and the left, I believe more would be done.”

For now, Quinn believes Trump is fighting on his family’s behalf — and until that changes, Trump will continue to get his support.

At first glance, Peggy Stewart might not seem like your traditional Republican voter. She supports a universal health care system. She voted twice for President Obama.

But her vote went to Trump in 2016, largely because he was a businessman and she liked his promises to create jobs and raise wages.

Stewart and her husband, Jim, lost their jobs during the recession. Today, they both are employed again: Jim works on the factory floor at Ford and Peggy works as a security guard for a corporate security firm. But both say they are still struggling to get by — and making much less than they used to.

Stewart says Trump hasn’t passed any legislation that she wanted, but mostly blames Congress. “[Trump] wrote ‘The Art of the Deal,’ and I really think this man could deal if he had the other side actually trying on their end,” she says.

For now, Stewart says she’s satisfied with Trump. She wanted to vote for someone “who had a spine” and she’s still happy with her vote. If the election were tomorrow, she says she would vote for Trump all over again.

The one thing that would keep her from voting for Trump?

“Bona fide proof that [Trump] has allowed Russia to come in and interfere with the elections so that he would win against Hilary.”

Since Trump took office, Decker says his business is booming and gives Trump most of the credit. He’s even invested more money into his company.

Decker imports his cabinets from China, which could take a hit if the import tariffs of between 25% and 40% that Trump proposed on the campaign trail ever goes through. But Decker isn’t worried. He says if the tax gets passed, it will be across the board, so all companies will feel it. It won’t just be him.

The one thing that does concern Decker? Trump’s stance on immigration. A bulk of his employees and the community’s workforce is Hispanic and he’s worried that limiting immigration will hamper his business.

Despite that fear, Decker says that the president still has his vote.