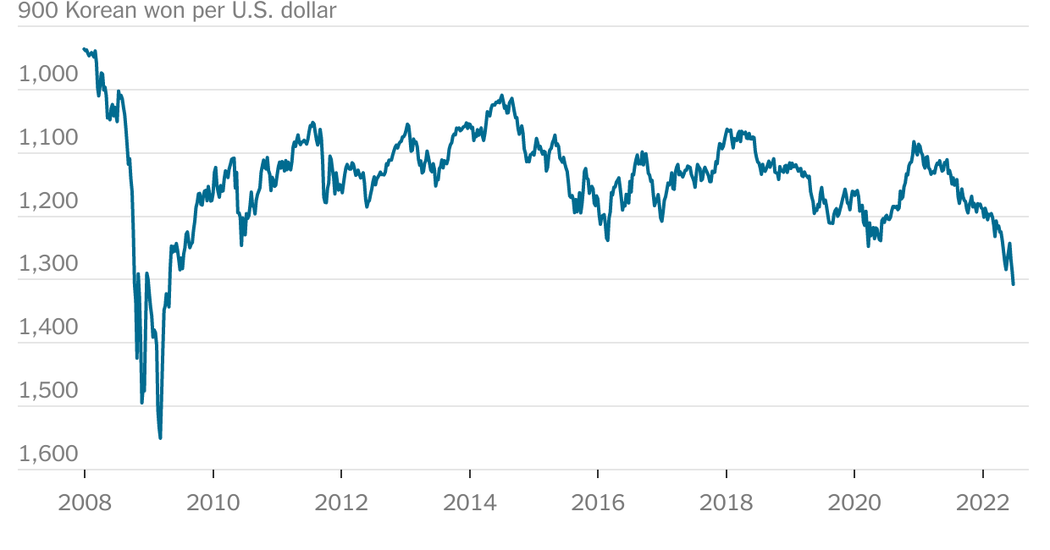 SEOUL — The South Korean won hit its lowest point against the U.S. dollar in nearly 13 years on Thursday, opening at 1,299 won and weakening to more than 1,300 in intraday trading.

The last time the country’s currency breached the 1,300-won threshold was in the summer of 2009, toward the end of the global financial crisis. The won also passed this threshold during the Asian financial crisis of 1997-1998. South Korea’s export-driven economy makes it particularly sensitive to conditions in the global economy, which have been deteriorating recently.

Choo Kyung-ho, the nation’s deputy prime minister and the minister of economy and finance, warned of the need to prevent a further decline of the currency at a meeting with other officials in Seoul on Thursday morning.

“If needed, we will make efforts to stabilize the market,” he said, while also calling for labor reforms and fair compensation.

Inflation is rising in South Korea as policymakers in the United States are also struggling to contain runaway consumer prices.

This week, the Bank of Korea, South Korea’s central bank, predicted the nation’s annual inflation rate would hit 4.5 percent by the end of the year, the highest rate in 14 years, with increased spending and rising commodity prices being contributing factors.

In May, consumer prices in the country jumped 5.4 percent compared with the same period a year earlier. It was the sharpest rise in over a decade, and came at a moment when South Koreans were eager to spend money after having lived under strict coronavirus social distancing rules.

The war in Ukraine has also played a role, according to the Bank of Korea, which said in a statement that sanctions on imports of Russian crude oil and petroleum products have led to a rise in international oil prices.

The central bank raised the base interest rate by 1.50 to 1.75 percent in May, and officials predict further increases in the future to combat inflation.