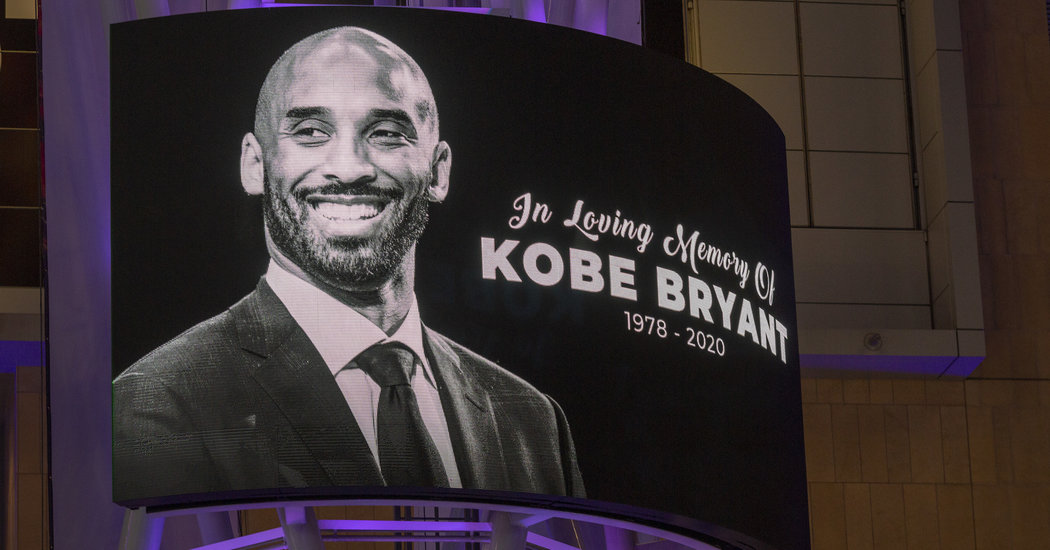 U.S. stock futures are down sharply this morning on fears about the coronavirus outbreak. More below. (Want this in your inbox each morning? Sign up here.)

The death of Kobe Bryant, the retired L.A. Lakers star, his 13-year-old daughter and seven others in a helicopter crash yesterday has stirred up grief across the sports world. It also had corporate leaders lamenting the loss of an up-and-coming business mogul.

Mr. Bryant was one of the greatest N.B.A. players, with five championship rings and 18 All-Star selections in 20 seasons.

But he was building a business empire, too:

• He started the investment firm Bryant Stibel in 2013 with the Web.com founder Jeff Stibel. Bryant Stibel has invested in companies like Dell, Alibaba and Epic Games, the maker of Fortnight.

• He also invested in Bodyarmor, a sports drink maker in which Coke later bought a stake to compete against Gatorade.

• And he founded Granity Studios, a media company.

“I got tired of telling people I loved business as much as I did basketball because people would look at me like I had three heads,” Mr. Bryant told ESPN in 2017. “But I do.”

The crash raises questions about the increasing use of helicopters for business travel. Aaron Mak of Slate notes that the number of civilian helicopters has grown 30 percent since 2006, and that choppers tend to crash more frequently than other aircraft.

What the business world said about Mr. Bryant:

• The venture capitalist Chris Sacca: “Not sure I will ever know anyone else with his work ethic.”

• The Reddit co-founder Alexis Ohanian: “He still believed he had work to do.”

U.S. stock futures are down sharply this morning, as the death toll of the coronavirus outbreak continues to rise and pressure grows on China’s political leaders and its economy.

• The number of deaths currently stands at 80, and infections have been reported worldwide.

• It’s still unclear how the outbreak began, since some patients never visited the seafood market in Wuhan where it is thought to have originated.

Questions have arisen over Beijing’s strategy of quarantining more cities in central China. Public health experts have asked whether the travel restrictions are limiting medical care.

President Xi Jinping has sought public shows of decisive action, including convening an extraordinary session of the Communist Party’s top political body. But “many Chinese remain unconvinced the government is being completely forthcoming about the toll of the disease,” Steven Lee Myers and Chris Buckley of the NYT write.

And Chinese consumer spending continues to drop, according to James Areddy of the WSJ, with potentially negative consequences for China’s economy. If the outbreak continues past March, economic growth might fall past a psychologically important level of 6 percent for the first quarter, according to analysts at Société Générale.

Will the Saudis enter the soccer arms race?

An investor group led by Saudi Arabia’s sovereign wealth fund is said to be in talks to buy the British soccer club Newcastle United for about $445 million, according to the WSJ and the FT. It could mean another team with well-heeled owners willing to spend millions to chase success.

The current state of play:

• Saudi Arabia’s Public Investment Fund is working with the financier Amanda Staveley and the billionaires David and Simon Reuben.

• The Saudis would own 80 percent of Newcastle in any such deal. Ms. Staveley and the Reubens would split the remainder.

Why Newcastle? It’s one of the better-known English Premier League soccer teams, with stellar attendance at matches. And its current owner, Mike Ashley, has been criticized for not spending enough on players.

The Saudis have been investing in businesses outside the Middle East to diversify their country’s economy away from oil. The sovereign fund, known as P.I.F., has taken stakes in companies like Uber and Tesla.

The question is how much the Saudis are prepared to spend on Newcastle. Abu Dhabi propelled Manchester City to the heights of the Premier League by spending heavily on the team, while Qatar has done something similar with Paris Saint-Germain.

U.S. and U.K. are headed for a clash over Huawei

Britain is reportedly expected to give Huawei a limited role in its 5G network this week, George Parker and Nic Fildes of the FT report. That could set up a fight with the Trump administration, which views the Chinese tech giant as a security threat.

Prime Minister Boris Johnson is likely to approve the use of Huawei products in “noncore” parts of the next-generation wireless network, after British intelligence officials said that they could “contain” any risks of using its technology. And Mr. Johnson’s government is considering imposing a cap on Huawei’s potential market share.

Trump administration officials have repeatedly warned foreign governments that Huawei poses a security threat. The U.S. has sought to impose ever-tighter restrictions on the Chinese company, and has argued that it’s impossible to stop the Chinese from infiltrating a network that uses Huawei equipment.

But British officials reportedly feel they have little choice, given Huawei’s technological prowess and a lack of alternatives.

Professor Christensen, whose 1997 book “The Innovator’s Dilemma” became a touchstone text for the business world, died on Thursday. He was 67.

His thesis was that “the factors that helped the best companies succeed — listening responsively to customers, investing aggressively in technology products that satisfied customers’ next-generation needs — were the exact same reasons some of these companies failed,” writes Glenn Rifkin of the NYT.

Successful entrepreneurs could miss out on the next big thing by focusing on their current customers and remaining married to their once-disruptive products. Professor Christensen published and spoke extensively about his findings, including at DealBook’s Playing for the Long Term conference in 2016.

Business leaders embraced his work. Andy Grove, a former C.E.O. of Intel, said soon after “The Innovator’s Dilemma” published that it was the most important book he had read in a decade.

Adam Grant, a Wharton professor and fellow sage for the business world, offered this assessment: “His most disruptive innovation was reminding us not to overinvest in careers and underinvest in people.”

More: How direct-to-consumer companies like Dollar Shave Club shook up the world of retail.

Greta Thunberg has an unlikely ally

“I stand with Greta on this issue. (I don’t have a degree in economics either),” Ms. Linton, a Hollywood actor and producer who is a public supporter of animal rescue organizations, wrote in an Instagram post on Saturday.

Ms. Linton later deleted the post, and then posted to her Instagram Story defending herself, writes William Cummings of USA Today. “I am not my husband,” she wrote to one critic. “I happen to love Greta. Whatever he says has nothing to do with my views or opinions.”

• Reporters at The Chicago Tribune really want someone to buy out their newspaper’s current owner. (NYT)

• California regulators are becoming a big hurdle for T-Mobile in its quest to buy Sprint. (WSJ)

• In an unpublished draft of his coming book, the former national security adviser John Bolton directly linked President Trump’s withholding of aid to Ukraine to his desire for investigations into Democrats. (NYT)

• “How Under Armour Lost Its Edge” (NYT)

• German prosecutors are said to be investigating payments by Deutsche Bank to win the business of a Saudi royal. (FT)

• Where Prince Charles of Britain’s personal fortune comes from. (NYT)