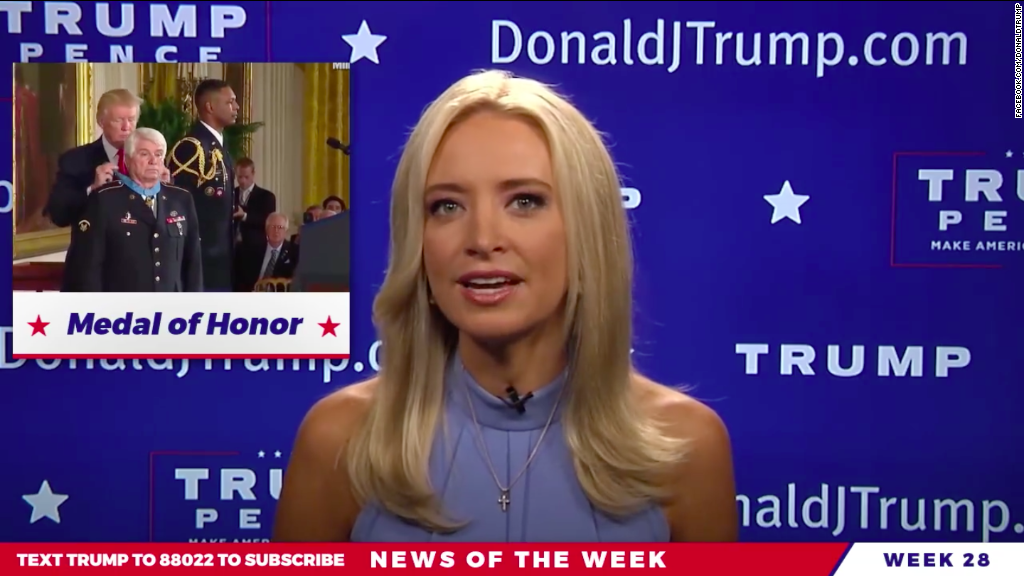 A day after Kayleigh McEnany announced she left CNN, she showed up as the centerpiece of a video clip posted by President Trump’s campaign team.

McEnany, a pro-Trump conservative pundit who appeared on CNN throughout the campaign season, announced via Twitter Saturday that she was leaving the network. She said to “stay tuned” for details about her next career move.

Then, on Sunday morning, the official Twitter handle for “Team Trump” and Trump’s verified Facebook page both posted a video of McEnany laying out “the news of the week.”

In the video, McEnany went over some of the week’s most positive news stories about Trump’s performance, including the Friday employment report that put the number of jobs created since January at more than one million.

“President Trump has clearly steered the economy back in the right direction,” McEnany said.

The segment appeared to be part of a video series launched by the Trump team a week ago. The first installment was hosted by Lara Trump, wife of President Trump’s son Eric. It was touted as “real news,” following a longstanding claim by Trump and his supporters that mainstream news outlets deliver “fake news.”

The clips have a format reminiscent of traditional news networks: The host appears on a screen in front of a graphic background. In this case, that background is a smattering of Trump, Trump/Pence and DonaldJTrump.com logos.

Elected officials using websites and social media platforms to promote their achievements is standard procedure these days, but the “real news” series appears to go further, seeking to discredit the mainstream media and advertising what purports to be a reliable alternative.

McEnany did not immediately respond to questions about her appearance on the “Team Trump” segment Sunday.

–CNNMoney’s Brian Stelter and Dylan Byers contributed to this report.