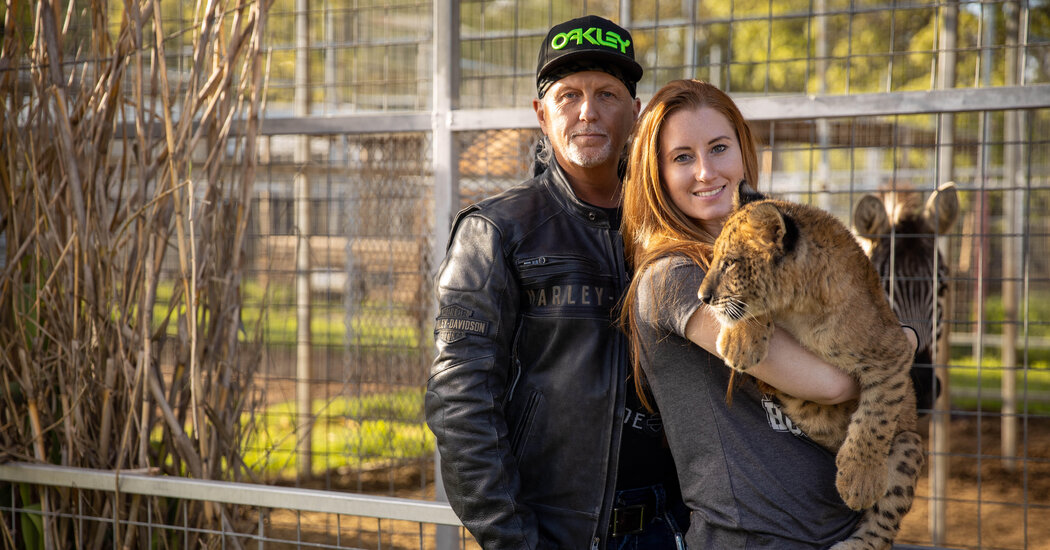 Jeffrey Lowe, the man who took over the animal park at the center of the popular Netflix documentary “Tiger King,” was accused on Thursday of violating the Endangered Species Act and Animal Welfare Act, prosecutors said.

On Thursday, the Department of Justice announced that it had filed a 110-page civil complaint against Mr. Lowe and his wife, Lauren Lowe and the park, the Greater Wynnewood Exotic Animal Park in Wynnewood, Okla.

Mr. Lowe’s lawyer, James M. Wirth, said in a statement that the couple were “consistently caring and kind stewards of animals in their care,” and that the government had constructed a “fictional interpretation” of the Animal Welfare Act.

“The government claims that because Mr. and Mrs. Lowe allowed a documentary crew onto their property, they were unlawfully exhibiting wildlife,” he said. “By the government’s contrived standard, anyone who takes a selfie of an endangered species in a zoo is an unlawful exhibitor in violation of federal law.”

Mr. Lowe is the latest figure from the documentary, about feuding exotic-animal owners and animal-rights activists, to face accusations of wrongdoing by the government. The previous owner of the park, Joseph Maldonado-Passage, was convicted last year of trying to hire a hit man to kill an animal-rights activist who criticized him.

Another park owner featured in the documentary, Bhagavan Antle, who is known as Doc, was charged in October with two felony counts related to wildlife trafficking and 13 additional misdemeanors.

Until August, Mr. Lowe and his wife operated the Oklahoma animal park that used to be owned by Mr. Maldonado-Passage, who is better known as Joe Exotic.

The 16.4-acre facility had several animals protected by the Endangered Species Act, including tigers, lions, a grizzly bear and ring-tailed lemurs, the complaint said.

In June, after a seven-year legal battle, a judge gave the park to Carole Baskin, the animal-rights activist who sparred with exotic tiger keepers in the documentary. Ms. Baskin’s husband, Howard Baskin, said in a statement Friday that they hope that the Justice Department is successful in removing the animals.

“The numerous very serious citations by U.S.D.A., in our opinion, clearly demonstrate that the Lowes should not be allowed to have animals,” he said, referring to the assertions by Department of Agriculture investigators.

In June and July, inspectors from the U.S.D.A.’s Animal Plant and Health Inspection Service said they found some of the animals “in poor health and living in substandard conditions at the Wynnewood facility,” a violation of the Endangered Species Act and the Animal Welfare Act.

In the complaint the Lowes were also accused of not providing “timely and adequate veterinary care,” causing some of the animals to “suffer from easily treatable conditions.” Some of these cases resulted in “untimely” death, the complaint said.

The inspectors found that the animals had not been provided with a sufficient amount of food, and that they were underweight and suffering from nutritional deficiencies.

Inspectors also said they found big cat carcasses that were partially burned and decomposing, and a broken refrigerator truck with rotting meat, the complaint said.

“The Lowes’ failure to provide basic veterinary care, appropriate food and safe living conditions for the animals does not meet standards required by both the Animal Welfare Act and the Endangered Species Act,” said Jonathan D. Brightbill, the principal deputy assistant attorney general of the Environment and Natural Resources Division.

The complaint also accused the Lowes of routinely separating big cat cubs from their mothers for “playtime” events with park guests, potentially bringing “long-lasting harm” to the cubs.

In one example, inspectors said they saw a lethargic and thin lion cub that had discharge coming out of her nose and eyes, and sores on her ears. They said the cub, named Nala, was later found to be suffering from an upper respiratory infection, dehydration, malnutrition and a urinary tract infection.

Nala was transferred to a wildlife sanctuary in Colorado in September, the complaint said.

Days later, Mr. Lowe voluntarily terminated his own license, court documents said. The Lowes later moved their animals to a 33-acre property in Thackerville, Okla. They have said that their new facility there will be named the “Tiger King Park” and will operate as a film set for television shows. The Lowes do not have a license to exhibit animals, according to the complaint.