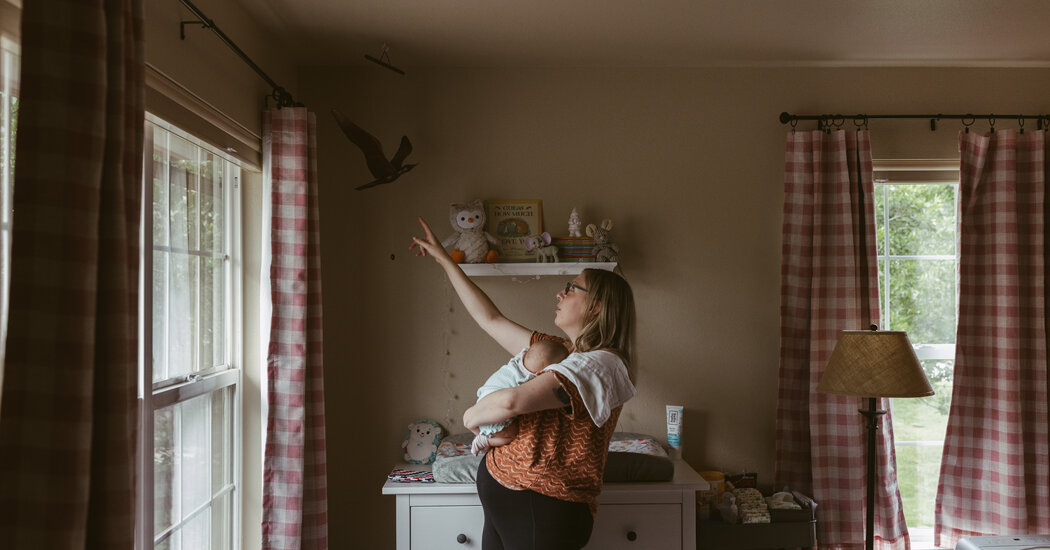 A dearth of child care and elder care choices is causing many women to reorganize their working lives and prompting some to forgo jobs altogether, hurting the economy at a moment when companies are desperate to hire, and forcing trade-offs that could impair careers.

Care workers have left the industry in large numbers amid the pandemic, shrinking the number of nursery and nursing home employees by hundreds of thousands. At the same time, coronavirus outbreaks have led to intermittent school shutdowns, which, in turn, have made care demands less predictable and increased the need for reliable backup options.

Although plenty of men have also taken on increased care duties since the pandemic began, women perform most caregiving in America, according to the Labor Department. They have made a surprising return to the labor market in spite of that challenge.

Federal data shows that the share of women participating in the labor market by working, or by looking for jobs, remains depressed relative to 2019, but it has recovered roughly as much as the share for men has. Mothers still work less than other women, but the gap between the two has narrowed to about the level that prevailed before the pandemic, an analysis by the Federal Reserve found.

Yet those signs of a comeback hide strains beneath the surface. A deeper dive into the Labor Department’s monthly survey of households shows that unmarried women without college degrees who have young children have returned to work more slowly than others, a sign that the shortage of care is making them particularly vulnerable.

Self-employment has also surged among mothers, suggesting that many women are finding ways to make work more flexible as they scramble to balance care responsibilities with their need to earn money. Other women talk about putting in fewer hours and juggling increased workloads.

In February, about 39 percent of women with children younger than 5 told Stanford’s RAPID Survey that they had quit their jobs or reduced their hours since the pandemic began, up from 33 percent at the same time last year. More than 90 percent of those women said they did so of their own accord, not because they were laid off or had their hours cut. Last year, that number was 65 percent.

Those forced to cut back on work could face lasting disadvantages. They are missing out on an unusual moment of worker power, in which many employees are bargaining for higher wages or switching to more lucrative jobs. Right now, the fields where women are most concentrated — including service sector jobs in hospitality and health care — have some of the most openings and the most rapid pay growth.

“I think it will be really interesting to see what the long-term consequences are on mothers’ career opportunities,” said Ariane Hegewisch, the program director in employment and earnings at the Institute for Women’s Policy Research. “Women have continued to work, but they clearly had to cut back.”

The State of Jobs in the United States

Job gains continue to maintain their impressive run, even as government policymakers took steps to cool the economy and ease inflation.

America’s long-running caregiving shortage, for both children and older adults, was compounded by the pandemic.

The professional caregiving work force — also disproportionately female — hasn’t recovered. More than one child care worker in 10 hasn’t returned, according to the Bureau of Labor Statistics (although that data may not capture all the single-employee, home-based operators that make up a huge part of the sector). The number of nursing home workers remains 11.5 percent below its level in February 2020. Together, the two categories represent a loss of 500,000 jobs.

“For women, that’s the double whammy — most of those workers are women, and most of the people who need those supports to enter the work force themselves are women,” said Katherine Gallagher Robbins, a senior fellow with the National Partnership for Women and Families.

At the same time, there is new demand for care. After a decrease in the number of births early in the pandemic, nearly 3.7 million people were born last year, up 1 percent from 2020 and the first such increase since 2014.

Christy Charny, a college administrative assistant in Fort Collins, Colo., recently talked to her manager about dialing back her hours from full time to part time. She likes her job and needs it for the health insurance it provides, but her 12-week-old daughter was having trouble nursing, and paying for full-time infant care was a nonstarter for her and her husband.

“There is no way that we can afford $1,500 a month for child care on our full-time salaries,” said Ms. Charny, 32. “We would go into debt just so that I could work full time.”

For a while, she was struggling to find any child care at all. She couldn’t afford full-time help, and the day care center where she had put down a deposit wouldn’t give her a discount if she used it only part time. She was frantically looking for other options when good news arrived: The most affordable nursery in her area, where she had been on the waiting list since October 2021, had a part-time opening.

The days — Tuesday, Thursday and Friday — were not exactly right for her professional schedule, but the place was just $246 per week, so she was going to try it.

“I know we can make it work if we’re careful and we cut back on other expenses,” she said. Ms. Charny’s husband sells shoes at REI, and together they make about $60,000 before taxes.

Economists have long identified a lack of available and affordable child care as a reason that American women do not work more, sometimes by comparing the United States with Canada — which is economically similar in many ways but has more generous child care and parental leave policies and a higher rate of female employment. The same is true for parts of Europe.

“Until 1995, the U.S. was the world’s leader in terms of female labor force participation,” said Claudia Goldin, an economist at Harvard. “Now, this host of countries that we used to think were backward in terms of gender norms have exceeded the U.S.”

And it is no surprise that the burden of care without professional help falls on workers with less education, who tend to earn less.

There is a “financial trade-off between work and child care” that hinges on “what share of your income that child care eats up,” said Sarah House, an economist at Wells Fargo. “It’s a much smaller share if you’re a working professional with a six-figure salary than if you are working a restaurant job and barely clearing $30,000.”

Stanford’s RAPID Survey also showed that most mothers who cut back on work did so even though they didn’t have adequate income without it. And for those staying on the job, volatility in the child care industry can add considerable stress.

“If you were hanging on to an official home-based provider to take your kid so you could go to your work, and that person closed their doors, you probably couldn’t afford to stop working,” said the survey’s director, Philip Fisher. “So you’d have to rely on anything you could pull together.”

As some mothers pull back, there are implications for the economy. Employers are missing a key source of labor at a time when they have nearly two job openings for every unemployed person.

Washington has tried to offset the problem to allow more parents to return to work. The American Rescue Plan, enacted last year, supplied $39 billion to help child care providers stay open, and probably prevented even larger reductions in care. Some states have supplemented that money, while others have relaxed licensing requirements and allowed a bigger ratio of children to care providers.

The White House’s Build Back Better legislation included $400 billion for child care and prekindergarten, and a recent study by a team of economists estimated a similar plan could raise the rate at which mothers are employed by six percentage points. But the legislation floundered as concerns about spending mounted.

Because of its dedicated federal funding stream, the elder care industry is larger and more formalized than the child care sector. But its work force is similarly low paid, and has gone through a harrowing time during the pandemic.

According to a recent survey conducted by ​​​​​​​​​​​​​​​​​​​​​​​​​​​​​​​​​​​​​​​the American Health Care Association, a nursing home trade group, wages for nurses have increased by between 28 percent and 34 percent since the pandemic began. But only about 5 percent of the nurses who left have returned to such institutionalized settings, according to federal data. Among the challenges for such centers is the tight labor market.

Dorinda MacDougald is one of those who have stuck it out. She has been a clinical nursing assistant at Ellicott Center in Buffalo for 25 years and makes about $18 an hour.

“I stay there for the residents, because they deserve quality care,” she said. But not everyone makes the same choice: One of Ms. MacDougald’s colleagues recently left to work at a Red Lobster. “You’d have to compete with the area,” Ms. MacDougald said. “Everybody else is paying $16, $17, $18.”

Data from the Centers for Disease Control and Prevention shows that about 31 percent of nursing homes are reporting staffing shortages, which can prevent them from taking in more residents.

Part of that reflects a shift toward home-based care, which both workers and patients have found safer and otherwise more appealing. Nursing home workers have also left for staffing agencies and hospitals, which offer better pay and more opportunities for advancement.

Among the states reporting the most widespread staffing shortages is Minnesota, where 69 percent of nursing homes say they don’t have enough caregivers. That state has a higher-than-average share of nonprofit facilities that depend on Medicaid and Medicare reimbursements, which the industry says have not been adjusted for the increased cost of operations.

That’s where Staci Drouillard, 54, has been trying to find a place for her parents.

She lives in Grand Marais, on Lake Superior, two hours northeast of Duluth. Her father, who is 87 years old and a lifelong resident of the town, has dementia. Her mother, 83, cared for him until she had a series of strokes.

Both parents worked, but they weren’t able to build enough savings to afford home-based care, even if a local aide were available. The county’s only nursing home has 37 beds, but six are empty because of staff vacancies, according to the facility’s chief executive.

Now, the task falls to Ms. Drouillard, who goes to her parents’ house most days. After getting a promotion at the radio station where she works, she shifted to a position that is home-based, with fewer hours, lower pay and less authority, as caregiving consumed more and more of her time.

“As I watched my parents’ health deteriorate and decline, I realized I needed to pivot to a job that has less responsibility,” Ms. Drouillard said. “Their care is kind of like having another job, except you don’t really know what hours you’re going to work.”