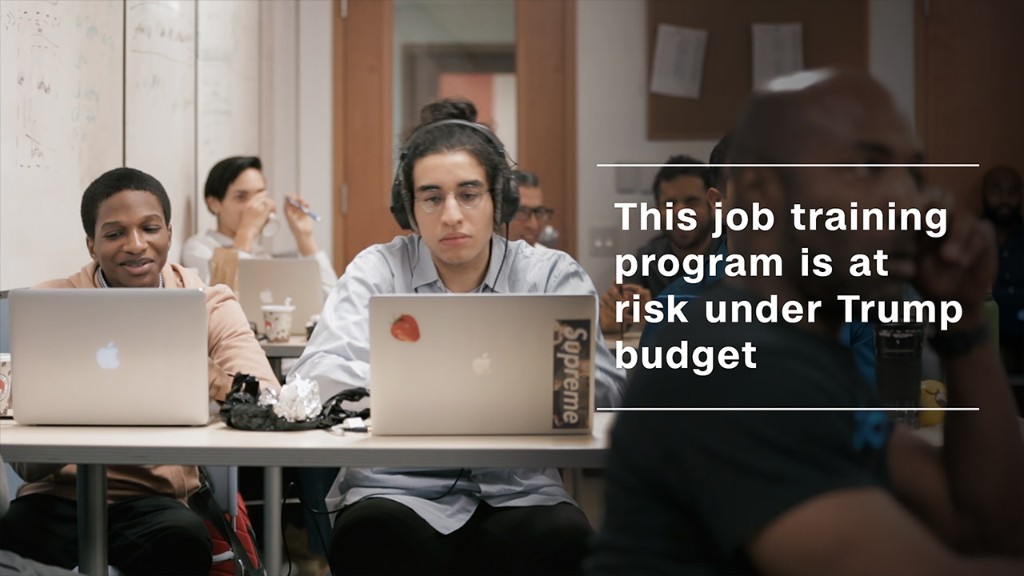 Living in a homeless shelter, drinking too much and unemployed, she had nowhere to turn. Strachan had already worn out her welcome at her sister’s apartment. She was 26.

Then her cousin recommended a job training program called Per Scholas near where she grew up in the South Bronx in New York City. A publicly and privately funded nonprofit, Per Scholas is entirely free to students.

A community college dropout, Strachan commuted 90 minutes each way for 13 weeks last year in order complete a program at Per Scholas and learn valuable skills to get a tech job.

It paid off. Strachan landed a $40,000 job fixing ATM machines for NCR Corporation shortly after finishing the program. A year after being homeless, she lives in a Manhattan neighborhood and is helping pay for her 2-year-old niece’s daycare so her sister can get her GED.

Related: Trump wants more apprentices. But can it fix the job skills gap

“That is what Per Scholas is doing, helping people move forward in life,” she said. “It is very gratifying to know that I am at a place where I can assist my family moving forward.”

Per Scholas says 70% of its graduates land jobs within three months of finishing. Its students typically have an annual income of $7,000 before the program and earn $30,000 a year after finishing it.

Per Scholas was praised by the Obama administration in 2014 for “providing entry-level skills that put people on the first rung of the career ladder.” It was recognized again at a White House event last year.

Despite the accolades, Per Scholas and other job training programs might find their funding slashed under President Trump’s proposed federal budget.

Trump, who promised to create more jobs than any other president, wants to focus on apprenticeships to fight unemployment.

His budget proposes a 40% cut to the Workforce Innovation and Opportunity Act, which provides grants to job training sites like Per Scholas. The budget says training programs “remain unproven.”

At the core of the debate is how to close the so-called “job skills gap,” in which workers do not have the training or skills sought by employers. There were 6 million open jobs in the United States in April, a record high. Even in high-paying industries like manufacturing, 360,000 jobs were unfilled.

The Workforce Innovation and Opportunity Act passed in 2014 with near unanimous support from Republicans and Democrats.

Trump’s proposed budget cut “is incredibly disappointing,” says Kelly Richardson, managing director of Per Scholas’ New York program. “If anything as a business person, the president should be doubling down on job training programs, not cutting them by 40%.”

Per Scholas runs programs in Dallas, Atlanta, Cincinnati, Columbus and near Washington, D.C.

It focuses on training students for jobs in IT, cybersecurity and other growing tech fields and it works with employers like Barclays (BCS) to design a curriculum that teaches job skills that are in demand.

“Those are all things that I think very much align with what the Trump administration wants: Get more Americans working again,” Richardson said.

Although a small part of Per Scholas’ budget comes from the Workforce Innovation and Opportunity Act, it would be hit hard by the ripple effect of cuts to referral programs through local community organizations that rely much more on the funding, Richardson said.

In short, the pipeline to Per Scholas would be broken.

Even though Trump’s budget cuts funding for job training, the White House did propose a $200 million investment in apprenticeship programs. Trump’s advisers say the move will give companies and trade groups flexibility to design programs for the skills they need.

The White House didn’t say how many new programs or apprentices it aims to create with its funding.

President Obama also made apprenticeships a priority, directing some $175 million to apprenticeship grants in 2015 and organizing programs with companies including Microsoft (MSFT, Tech30)and Amazon. (AMZN, Tech30)

Currently there are about 500,000 apprentices in the U.S. and 6.8 million unemployed Americans. The Trump administration would need to significantly increase the number of apprentices to bridge the job skills gap, economists argue.

‘One size doesn’t fit all’

Experts say one size doesn’t fit all when it comes to closing the job skills gap. A mix of apprenticeships and effective job training is needed to get more people into good jobs, they say.

“We need to explore and invest in a full toolkit of workforce readiness programs,” says Josh Wright, chief economist at iCIMS, a software company that runs its own apprenticeship program.

Related: The coal miner who became a data miner

Students at Per Scholas spend about 40 hours a week in class and often go home each night with three to four hours of homework. Some students say they don’t sleep much, but don’t mind the grind — a job is on the horizon.

Strachan, the Per Scholas graduate fixing ATM machines, has a big dream one year after being homeless: Renting her own apartment.

She’s saving up, her credit score has nearly doubled and she’s no longer stressed about money. She’s taking yoga classes and trying to cook at home more.

“I see myself fulfilling my own personal goals and dreams,” she said.