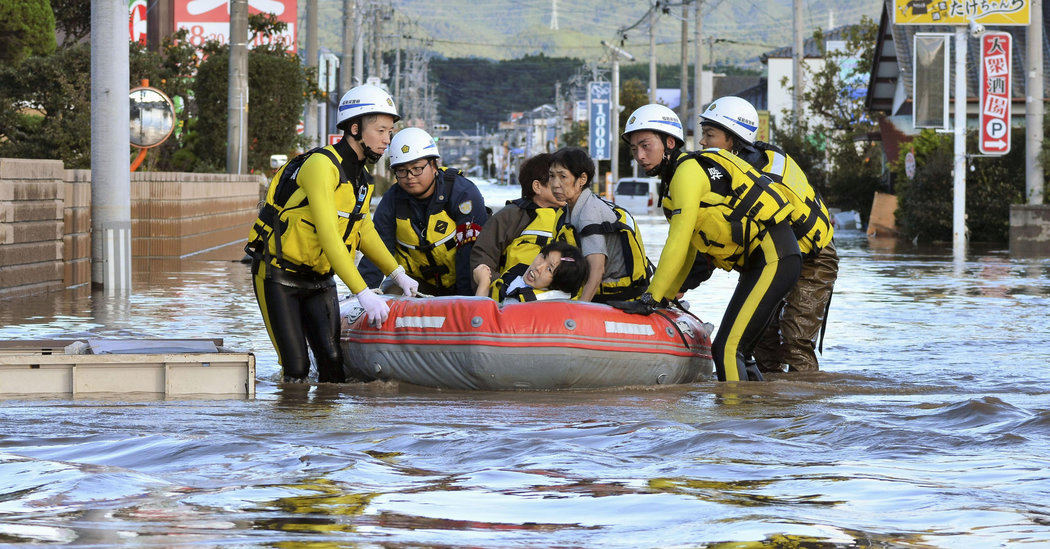 TOKYO — Japan woke Sunday morning to flooded rivers and burst levees, as emergency workers employed helicopters and boats to rescue stranded residents from their homes in the wake of Typhoon Hagibis, the largest storm to hit the country in decades.

Rescue services jumped into action early in the morning, with helicopters plucking stranded people from balconies and roofs. As of Sunday morning the death toll stood at 10, with 16 people missing and nearly 100 injuries reported, according to public broadcaster NHK. Fatalities were expected to mount as swollen rivers rushed through flooded neighborhoods.

More than 370,000 households were without power and at least 15,000 homes were without water, Yoshihide Suga, Japan’s chief cabinet secretary told reporters, adding that the country was taking every measure to recover.

At least 14 rivers flooded, NHK said, after record-breaking rains. In Nagano prefecture, northwest of Tokyo, a levee burst on the Chikuma river, flooding a wide area of Nagano city.

Another four levees across the flood zone had also collapsed, according to NHK and information provided by local governments.

In Fukushima prefecture, where a huge earthquake and tsunami caused the Daiichi nuclear power plant to melt down in 2011, a burst levee flooded the banks of the Abukuma river following heavy rains. Separately, Tokyo Electric Power said it was inspecting the nuclear plant for damage from the heavy rains.

At least 27,000 rescue workers raced to evacuate people from the flood zones, where water reached up to buildings’ second stories and strong currents swept through the streets. NHK showed images of an effort to rescue hundreds of people stranded at an elder care center in Saitama, a suburban area north of Tokyo. Television announcers urged people trapped in their homes to put up pieces of fabric as a signal to rescuers.

After a day of heavy rains, the storm made landfall Saturday around 7 p.m., local time, southwest of Tokyo in the resort town of Ito. It struck the capital directly, lashing the surrounding areas with heavy rains and winds of up to 130 miles per hour, before moving north.

At least two deaths and several landslides occurred even before the typhoon hit, and a 5.7-magnitude earthquake of shook Chiba, east of Tokyo, Saturday evening just before the storm made landfall.

Authorities had expected that Hagibis could rival the Kanogawa typhoon of 1958, which killed more than 1,200 people in Shizuoka Prefecture and the Tokyo region. They urged people to prepare to evacuate for days in the lead up to the storm.

On Saturday, authorities issued a rare highest-level warning of extreme rain in 12 prefectures, including Saitama and Shizuoka, advising residents to evacuate or move to higher floors in the “nearest sturdy building” in order to avoid “imminent danger.” All of the alerts had been lifted by Sunday morning.

Some businesses planned to remain closed on Sunday as road closures across the country’s central and northern regions disrupted deliveries.

Some flights and trains had resumed service Sunday morning. But many Japan Railways routes continued to be suspended Sunday morning as operators assessed damage, the company said. Images from NHK showed a number of bullet trains submerged up to their windows.

In Saitama, the Oppegawa River was swollen with muddy water Sunday morning. Some neighborhoods near the riverbanks had flooded and nearby residents walked or rode bikes to view the flooding. One street in Sakado-shi- Akao was impassable but had a pristine view of Mount Fuji in the distance under a clear blue sky. Kenichi Nakajima, 58, a farmer, had driven over a bridge to see the flooding close to a friend’s house.

“They can’t get out of their houses, it’s such a pity,” he said.

“We don’t have supermarkets around here. We have to go far to a big supermarket. But without a car, we can’t go shopping as the cars are flooded.”

The scale of the damage was “abnormal,” Mr. Nakajima said, suggesting global warming was responsible.

“Recently a girl made a speech about global warming and as she was crying she said ‘we have no future,’” he said, referring to the climate activist Greta Thunberg.

“She is absolutely right.”