2018 may be the first year in a long time that Google and Facebook’s share of U.S. digital ad spending decreases, according to forecasts from eMarketer . That’s due to a combination of their dominance over the past decade increasing their combined share to high levels, slower ad growth in their core products going forward, and rapid growth from a couple key competitors: Snap (NYSE: SNAP) and Amazon (NASDAQ: AMZN) . 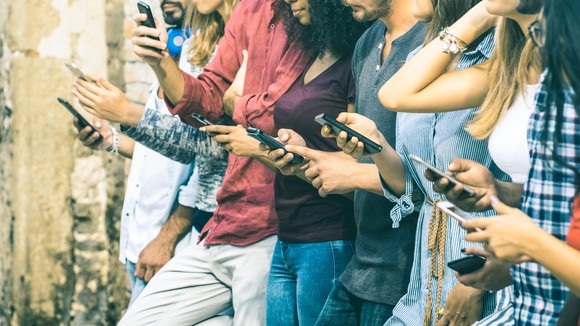 Facebook’s management has warned investors for the last six quarters that it’s facing ad load saturation . Simply put, there’s no more room in News Feed to place ads without ruining the user experience. So far, Facebook has been able to make up for smaller ad impression growth with strong growth in its ad pricing. But there’s a limit to how much marketers will pay for advertisements.

As such, it’s not a big surprise that the majority of Facebook’s ad revenue growth over the next few years will come from Instagram. Instagram’s U.S. ad revenue will grow from $3.2 billion last year to over $10 billion by 2020, according to eMarketer’s estimate. The photo-sharing app will account for nearly three-quarters of all of Facebook’s ad growth during that period.

Google, meanwhile, is continuing its steady growth, but the law of large numbers is catching up to it. The search engine, its associated websites, and its ad network took nearly $35 billion in ad spend last year. That makes continued growth in the 20%-plus range increasingly difficult. Indeed, eMarketer forecasts Google’s ad revenue will grow around 14% per year through the end of the decade.

Snap is starting to snap up advertisers

Snap still represents a tiny sliver of the U.S. ad market, but its rapid growth means it’s starting to have an impact on the rest of the competition. Snap’s self-serve ad platform will enable it to scale, but it’s been experiencing growing pains as the shift to auction-based ad pricing has sent its average ad price tanking . If Snap can attract more marketers to its platform, ad prices should recover and result in meaningful revenue growth.

eMarketer thinks Snap can grow its U.S. ad revenue at a clip around 75% per year through 2020. That’s notably faster than what Wall Street analysts think Snap will grow globally. Snap faces quite a few challenges to building its user base and revenue both domestically and globally, not to mention it still has to prove it can produce strong returns on investment for marketers. eMarketer may be overestimating Snap’s growth and its impact on Facebook and Google.

Amazon is a much bigger threat

Amazon’s advertising business could be its next $10 billion service. It’s already the No. 5 digital advertising platform in the U.S., and could rise to No. 3 by 2020, according to eMarketer.

Working in Amazon’s favor is its relatively low ad load. It still mostly shows advertisements on its own properties in search results pages and on the homescreen of its kindle devices. Amazon also offers publishers the option to place advertisements on their own websites, but it’s still relatively small compared to advertising on Amazon’s owned properties.

Amazon is also unique among Facebook and Google’s competitors in that it has a data set that could make its ad targeting just as good as the market leaders’. In fact, Amazon’s data may be even better since it actually knows how its users spend their money.

Amazon’s ad business is already having a major impact on its North American operating margin. Look for that trend to continue, and for marketers to flood into Amazon’s ad products as they look for alternatives to the increasingly saturated Facebook.

In other words, the two might not be dominating the market like they have in the past, but the competition doesn’t seem to be having a major impact on their growth. Instead, their slowing growth stems from internal challenges that make it harder to outpace the market. The growth of Snap and Amazon appears to come at the expense of smaller competitors more than taking sales away from the duopoly.

10 stocks we like better than Facebook
When investing geniuses David and Tom Gardner have a stock tip, it can pay to listen. After all, the newsletter they have run for over a decade, Motley Fool Stock Advisor , has tripled the market.*

David and Tom just revealed what they believe are the 10 best stocks for investors to buy right now… and Facebook wasn’t one of them! That’s right — they think these 10 stocks are even better buys.