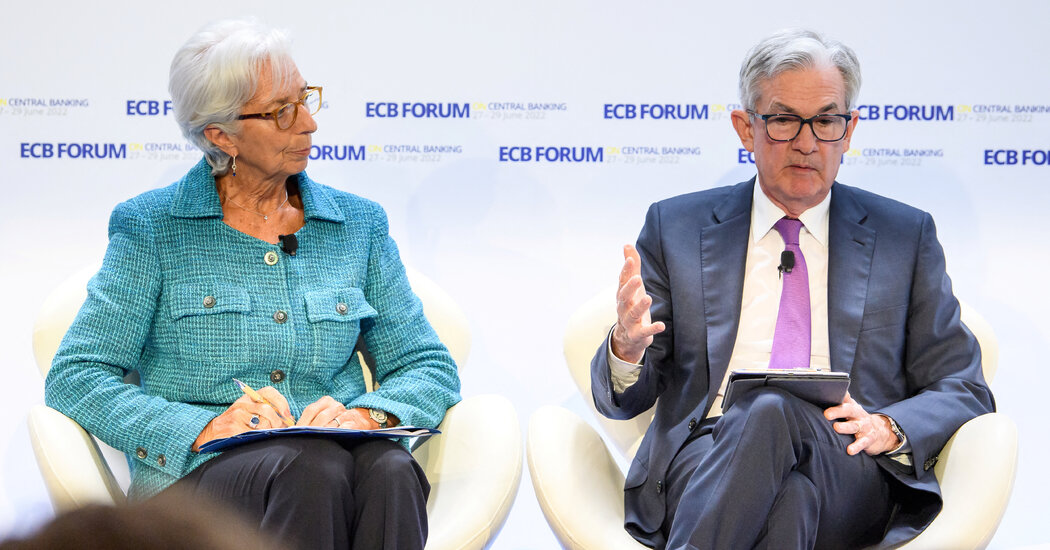 Inflationary forces have been “unleashed” by the pandemic and war in Ukraine, the head of the European Central Bank said on Wednesday, worsening the challenge that central bankers face in returning price growth rates to their targets.

“I don’t think we are going to go back to that environment” that kept prices low over the past two decades, said Christine Lagarde, the president of the bank. That period of low inflation, predicated on increasing globalization, has now changed, though the extent of that is still being debated, she added. Meanwhile, inflation expectations, which policymakers watch carefully to see if elevated prices become uncontrollable, are rising for the region.

“There are forces that have been unleashed as a result of the pandemic, as a result of this massive geopolitical shock that we are facing now, that are going to change the picture and the landscape within which we operate,” Ms. Lagarde said.

Ms. Lagarde spoke alongside the heads of the Federal Reserve and the Bank of England at the European Central Bank’s annual forum in Sintra, Portugal, which has been dominated by how the bank would tackle inflation across 19 economies without disrupting the government bond market.

On Tuesday, Ms. Lagarde said inflation in the eurozone was “undesirably high” and reiterated the bank’s plan to raise interest rates for the first time in more than a decade in July. Across the eurozone, inflation climbed above 8 percent in May, far above the central bank’s target of 2 percent. Earlier on Wednesday, data showed the annual inflation rate in Spain exceeded 10 percent for the first time since 1985. Both Jerome H. Powell, the Fed chair, and Andrew Bailey, the governor of the Bank of England, agreed this was a new period for inflation and one that policymakers needed to counter. Mr. Powell added that the Fed couldn’t permit the U.S. economy to transition from a low-inflation environment to a high-inflation regime in the long term.

After a period when disinflationary forces dominated, “since the pandemic, we’ve been living in a world where the economy is being driven by very different forces,” Mr. Powell said.

The eurozone and Britain have both experienced energy price shocks, exacerbated by Russia’s invasion of Ukraine. “The energy shock we have suffered, are suffering and will probably continue to suffer will have a major impact,” Ms. Lagarde said.

Ms. Lagarde has signaled that when the bank raises rates again in September, it’s likely to be a bigger increase than in July. But this week she has sent a message that the risk of persistently high inflation outweighs the slowing economic growth outlook.

The Bank of England, which began raising rates in December, has tried to walk a “narrow path” between arresting inflation, which was at a 40-year high of 9.1 percent in May, and concerns about the rising cost of living causing the economy to stagnate.

“We are being hit by very large national real income shock that’s coming from outside,” Mr. Bailey said. The full scale and impact of that shock was unknown, he added.

But amid signs that wages are rising more quickly than usual in Britain and more goods and services are recording above-average price increases, the Bank of England has opened the door to a more aggressive policy response. “If we see greater persistence of inflation, that is second-round effects, then we will act forcefully,” Mr. Bailey said on Wednesday.