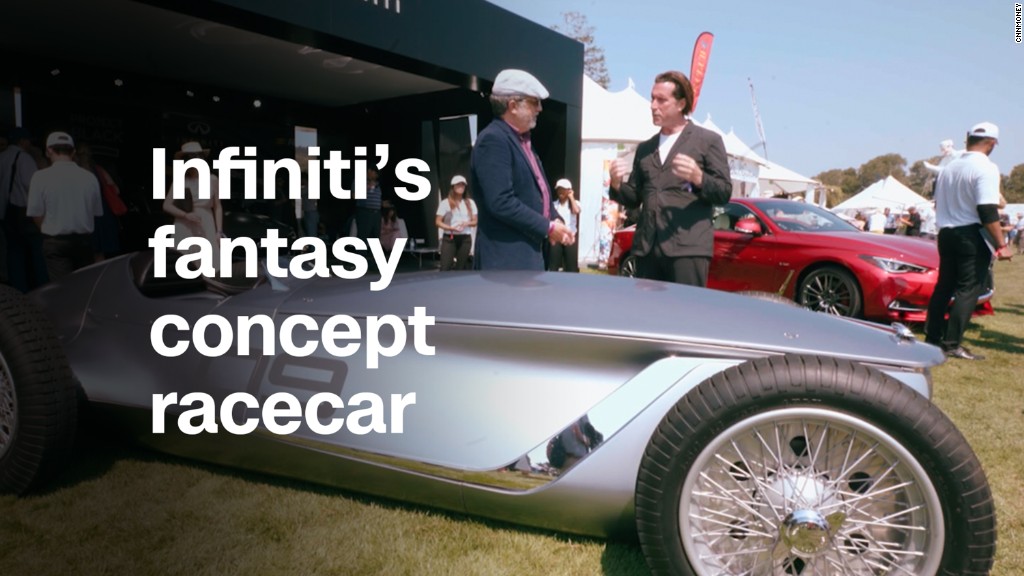 The design offers a modern take on a 1930s Inifiniti Grand Prix racecar. Except there weren’t any Infiniti racecars in the 1930s. Nissan’s luxury brand didn’t even exist until 1989.

In fact, Infiniti Prototype 9 was originally just going to be a drawing, said Alfonso Albaisa, Nissan’s (NSANF) global head of design. It was an idea someone sent him in a text message that he sketched out. But the idea was too good to keep it on paper, he said.

“When we started designing it, engineering got all excited and they said they’re in. Then our oldest factory in Japan, Oppama, raised their hand. They’re in. So it became a real car out of nowhere,” Albaisa said.

The idea started as: What if Infiniti had been competing against the likes of Germany, France and Italy on Grand Prix racing circuits in the 1930s and 1940s?

The concept drew inspiration from the likes of Germany’s Silver Arrow cars, made by Mercedes-Benz and Audi, Italy’s red Alfettas, made by Alfa Romeo, and bright blue Delahaye 145s from France. Nations were vying to show their engineering talent and, drivers, their courage as the continent spiraled toward toward another war.

The Prototype 9 looks every bit the part. Its dimensions conform precisely to Grand Prix regulations of the era. One key difference is that, unlike those older cars, the Prototype 9 is an electric car. Its long hood filled with battery packs rather than a combustion engine. That means it runs silently. The cars that inspired it were anything but silent.

The concept car has a top speed 130 miles an hour, and it’s capable of springing from a stop to 60 miles per hour in about five seconds, Albaisa said.

He drove it on a test track in Japan where the designer, born in the United States to Cuban immigrant parents, now lives.

“To be honest, when I was going around the track, around the bank, I felt more like a bird than anything. A very low flying bird,” he said. “It was silent. I could see the tires next to me, because the position of my head. It was almost poetic.”

The most exciting thing for Albaisa wasn’t driving the car. It was seeing this one car, by itself, being built in a factory right next to production lines that were turning out other, more modern looking cars in the thousands.

“The passion for building a car, in Japanese is monozukuri, ‘making things,'” he said. “I find to be something that is inspiring for me.”