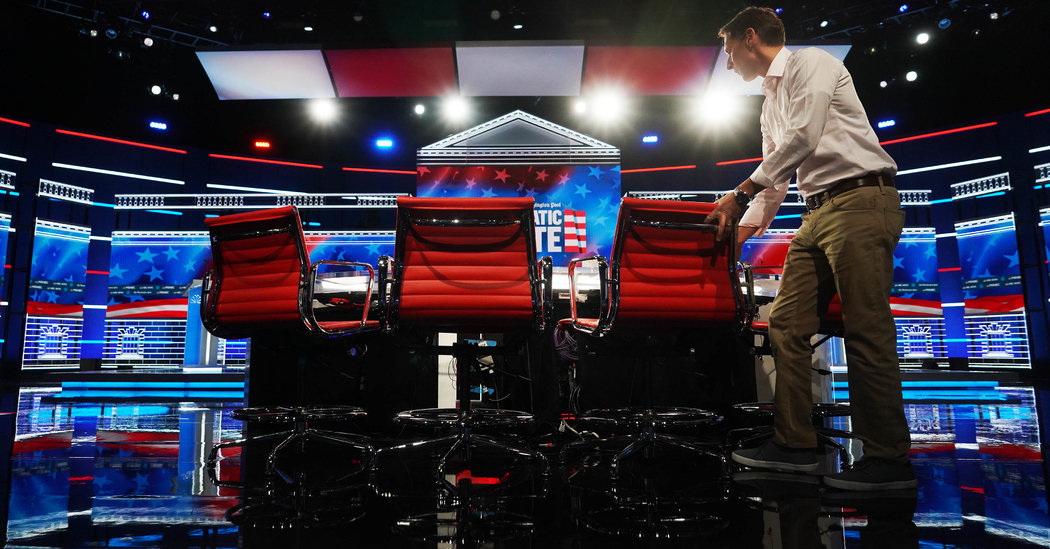 Discussions about health care have dominated the six previous nights of debates among the Democratic presidential candidates. Ahead of Wednesday night’s debate in Atlanta, we asked our readers what issue they most wanted the candidates to address, and why it mattered to them and their families.

One issue stood out: climate change.

About two-thirds of the more than 1,000 readers we heard from across the country said they wanted the next president to aggressively try to head off a climate catastrophe. These included young people grappling with the desire to grow a family ahead of a looming crisis, and grandparents fearful their youngest relatives would inherit a damaged world.

Parker Gertz in Havertown, Pa., wrote simply: “I am young and want to live.”

In addition to the environment, readers cited health care costs, an economy that leaves many behind, gun control and student loan debt as the issues they most wanted the Democratic candidates to address.

Below is a selection of responses, which have been lightly edited.

I am a young woman who cannot imagine a happy future because of these issues that older generations have caused.

I have lost hope in having children because it would be selfish of me to bring children into this doomed natural world.
— Molly Meehan, Yardley, Pa.

I live on a beach, and rising water threatens to inundate my home and others. Sea walls that go unrepaired, and roadways and bridges that need replacement or repair mean I cannot count on escaping the waters if I need to.
— Mary Klein, St. Pete Beach, Fla.

My home state of Michigan may become a last refuge from rising seas and worsening droughts. I’m afraid of what a rise in population will do to the beautiful natural spaces I love.

And the little things scare me, too. The uncertain future of chocolate and coffee, in part due to climate change, is terrifying in its own way.
— Hannah Ellery, 20, Traverse City, Mich.

I live in southwest Colorado. Despite having an extraordinary amount of snow last winter, we are back in a severe drought. Our snowpack is changing. We are experiencing more severe wildfires.

I’m concerned about other countries and the impact the warming temperatures are having on them and also on places in our own country, with increased flooding and more severe storms.
— Gail C. Harriss, Durango, Colo.


By The New York Times

I am a single mother who is self-employed. My family depends on insurance from the Affordable Care Act. But the plans have become so expensive that just paying premiums pushes my business into the red some years.

You might imagine that I am a fan of “Medicare for all,” but I am not. I work in the health care industry and I know how complicated and traumatic it would be to try to overhaul the way health care providers and insurance companies interact.

I do not want to turn everything upside down. I just want the A.C.A. shored up so that it works for freelancers and small businesses.
— Frances Verter, Maryland

The high cost of our prescriptions in this country compared to the rest of the world’s is my greatest concern.

In 1998, my sister and I spent three weeks in Spain. She became ill. I was sent to the pharmacy for her medicine. I gave them the prescription and they gave me the meds.

I paid a small amount, under $5, for what turned out to be a form of penicillin. From that moment on, I came to believe that there was something very wrong with our pharmaceutical companies and the greed of it all.
— Jean Zappia, Morehead, N.C.

I work in health care. I see the devastation our health care system causes. The current stranglehold insurance companies have on medicine in our country is destroying us from the inside out.
— Yvonne McCarthy, Kansas

I was diagnosed with breast cancer last year, and without health insurance the cost of my treatments would have been a quarter of a million dollars out of pocket.

Have a plan for implementing and managing health care changes

I am a cancer patient. I have to live in fear of losing everything I worked for my whole life, to stay alive.

I want to hear how candidates will get their idea passed through Congress and how it will be implemented. Otherwise ideas mean nothing.
— Judith Salyer, Ypsilanti, Mich.

Thousands of Americans will be out of jobs if we move toward abolishing private health care. I want to know how politicians plan to transition the jobs that they will be eliminating.

I work in insurance and I know how many jobs there are in back-office functions in billing, collections, claim handling and customer service. Most of these jobs require a very specific set of skills that will not necessarily transfer to other industries.
— Alex Sam, Philadelphia

As a survivor who was wounded in a school shooting, I have been waiting for a candidate who is passionate about the topic of gun violence and reform.

With Beto out of the race, I am looking for the person willing to take on this issue with as much passion and resolve as he did.
— Taylor Schumann, Charleston, S.C.

I’m 17 years old, and I’m terrified. That my friends will be killed. That I will be shot down dead. All I want to do is go to college, but what if I’m not safe there?
— Rachel Ellynn M., Missouri

I have a high school son and a husband who is a high school math teacher. With every school shooting I hear about, I become more nervous about it hitting home.
— Kristy Fitzgerald, Frisco, Texas

Make our economy work for everyone

The rate at which the economy is changing affects all of us. I used to work at a now-closed retail establishment. My boyfriend worked in a distribution center. He saw the company automate jobs away.
— Nicole Sanchez, Columbia, S.C.

I live in Dayton, Ohio, and our county swung for President Trump, yet also elected Obama. People are struggling. Our community has job openings but a serious skills gap. Workforce issues are huge here. Just because the overall economy is booming doesn’t mean we’re not being left out.

We need a president that will fight for working-class people and prioritize programs that get people the training and support they need to compete in today’s global economy. Our middle class has been hollowed out. I live in a city with 7,000 vacant structures. Wall Street and corporate greed have left the Midwest behind.

We need someone who will focus on supporting programs that help economic mobility across the country.
— Bryan Stewart, Dayton, Ohio

I make six figures, but between me and my husband, we can hardly afford to pay all our bills. With day care and health care costs for two kids, we have no money to save.

If this was 30 years ago, a boomer would have a substantially more comfortable life at a similar life stage.

My generation is already doomed to be a lost generation. I want to make my children’s economic future less bleak.
— Justine Graham, Plymouth, Minn.

Where is this tight job market and booming economy everyone is talking about? It doesn’t exist in my world, and I am a college-educated experienced professional.
— Jane O’Donovan, Dunedin, Fla.

Reset how America engages with the world

I am a Vietnam combat veteran and come from a military family. I visited Vietnam last year and I can tell you that after 50 years, the effects of abhorrent combat behavior such as the My Lai Massacre continue to haunt the Vietnamese people.

Pardoning war criminals endangers the entire military community, and it sends a message to our troops that there are no repercussions for criminal behavior on the battlefield.
— Mark McVay, Golden, Colo.

When my preteen son was adopted from Korea, I was so proud to bring him home to us in America. I held him in my arms just a few short weeks after we brought him home, and wept while listening to Obama’s inauguration.

It felt so right.

We were once the nation that gave hope to democracies around the globe, including Korea. We have our share of historical evildoing, but after World War II, American soldiers handed out Hershey bars. We’ve built hospitals in war zones and we put our money where our mouth was in upholding ideals with aid.
— Sophie Johnson, Arlington, Va.

I pay about one-third of my family’s income to student loans. This is crippling to a growing family.

It would be a huge boost to our family and to our spending if some or all was forgiven.
— Jacob Theurer, Grand Rapids, Mich.

I pay more than my rent in student loan payments each month. I have paid about $20,000 over the last four years and I still owe almost as much as I borrowed.

My interest rates range from 5 to 7 percent. This financial situation is holding me back from goals like owning a home or starting a business.
— Megan Gileza, Baltimore

My daughter is a scientist. She will continue her graduate studies next year. I want her to live in a world where her gender, studies and intellect matter to the country, to the world and to the future.
— Susan Goldstein, New York

As a young woman, I feel my right to reproductive health services is under attack, especially in the Southern states.

I want to feel safe in this country and know that if I ever needed it, I could access specialized female health care without significant hurdles. I know that when women are properly cared for and provided the care they need (whether it be safe abortions, contraception, or necessary labs and tests) the entire community benefits in some capacity.
— Isabel Watkins, Carrboro, N.C.

Improve the quality of public education

My community has an excellent education system, but looking around the country, you see the stark disparities so that our citizens cannot participate in our democracy intelligently.

It might be the downfall of our country.
— Diane Pursley, Lexington, Mass.

I live in Florida and have two kids. One is in middle school and another is in high school.

Education quality here is less than excellent. I would like to see kids having a well-rounded, meaningful education, instead of being bombarded by standardized tests.
— Teresa Restom Gaskill, Florida

The only issue for the election is removing Trump and Republican senators, not radical proposals that have no chance of voter or congressional approval.
— Jim Austet, Colorado

Get Trump out of office. He is the greatest threat to the United States, its values and its place in the world in my lifetime.
— Joe Distelheim, South Carolina

At 84, I have never been so scared for our country. I see the destruction of our democracy as the most critical.

I will not live to see it repaired, but maybe I will live long enough to see this president removed and see his corrupt administration held accountable.

This affects everything we need to care for our people.
— Sara Davis Huff, Atlanta

A note to readers who are not subscribers: This article from the Reader Center does not count toward your monthly free article limit.

Follow the @ReaderCenter on Twitter for more coverage highlighting your perspectives and experiences and for insight into how we work.