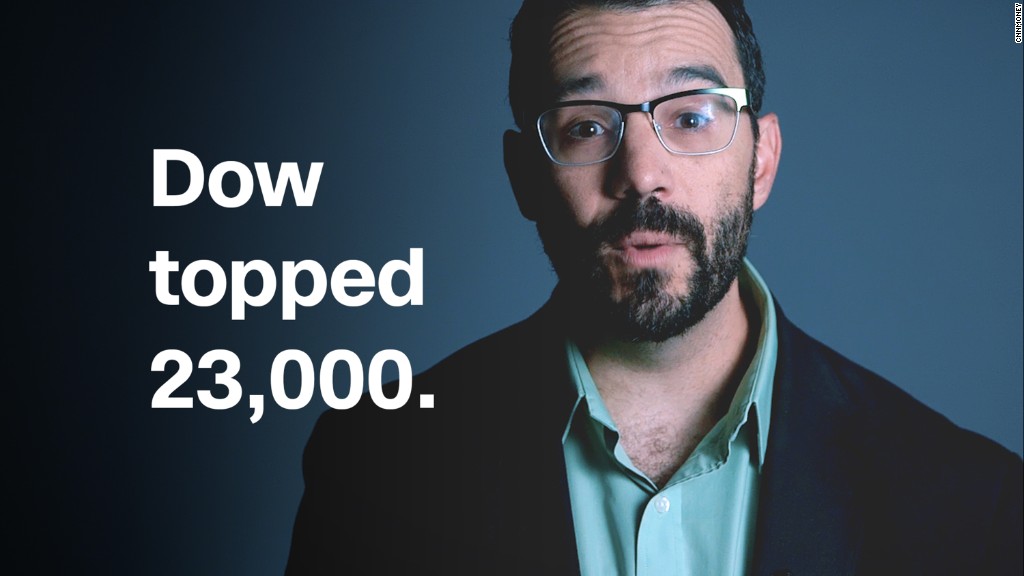 It’s a question fit for IBM’s artificial intelligence platform Watson. Is the worst finally over for Big Blue?

IBM reported Tuesday that sales and profits topped forecasts. The stock surged 9% on the news Wednesday morning, helping to lift the Dow more than 100 points and pushing it past 23,000.

But IBM is still down 4% this year, making it one of the Dow’s worst performers — and with good reason.

Sales were better than analysts’ expectations, but they still fell slightly from a year ago to $19.2 billion. That’s the 22nd consecutive quarter of year-over-year revenue declines for IBM — not a streak that any company wants.

What’s more, IBM’s profits continue to be lifted by a super low tax bill. It paid just an 11% tax rate globally in the third quarter.

IBM critics argue that the company is benefiting from various tax loopholes to justify its lower rate and thereby boosting earnings in the process.

In other words, the earnings growth would be much lower if IBM paid a tax rate closer to what many other companies pay. That could be as high as 39.1% in the U.S. when factoring in current federal and state tax rates.

The company has continually pointed out that it has operations around the world where corporate taxes are much lower.

Related: Dow cruises past 23,000 for the first time

CFO Martin Schroeter said during a conference call with analysts on Tuesday that it does business in 162 countries. That is a key reason why its tax rate is so low.

But President Trump and Republicans in Congress are hoping to push that rate lower in order to entice companies like IBM to bring cash it has sitting overseas (which is usually taxed at a lower rate) back to America.

IBM ended the third quarter with $11.5 billion in cash. It uses a chunk of its cash every quarter to buy back stock and pay a dividend to shareholders. So it’s possible IBM could boost the dividend and buybacks further if it is taxed at an even lower rate.

That could anger activists who already think that IBM is benefiting too much from low global tax rates.

Still, there is undeniably good news for IBM beyond its relatively puny tax bill.

The company, which has struggled in the past few years because of a shift in the technology landscape, is finally starting to benefit from investments it’s made in cloud computing and other more dynamic and rapidly growing areas of tech.

Related: The White House explains its stance on corporate taxes

IBM’s revenue from cloud computing businesses grew by 20% in the quarter to $4.1 billion. Cloud revenue now accounts for more than 20% of Big Blue’s overall revenue.

There also continues to be slow and steady growth in its Cognitive Solutions unit, which includes Watson applications for health care companies and financial firms. Revenues rose 4% in the quarter to $4.4 billion.

Continued growth from the cloud, Watson, security software (where revenues surged 51% in the third quarter) and older businesses like mainframes and storage could help IBM finally end its ignominious streak of falling sales in the fourth quarter.