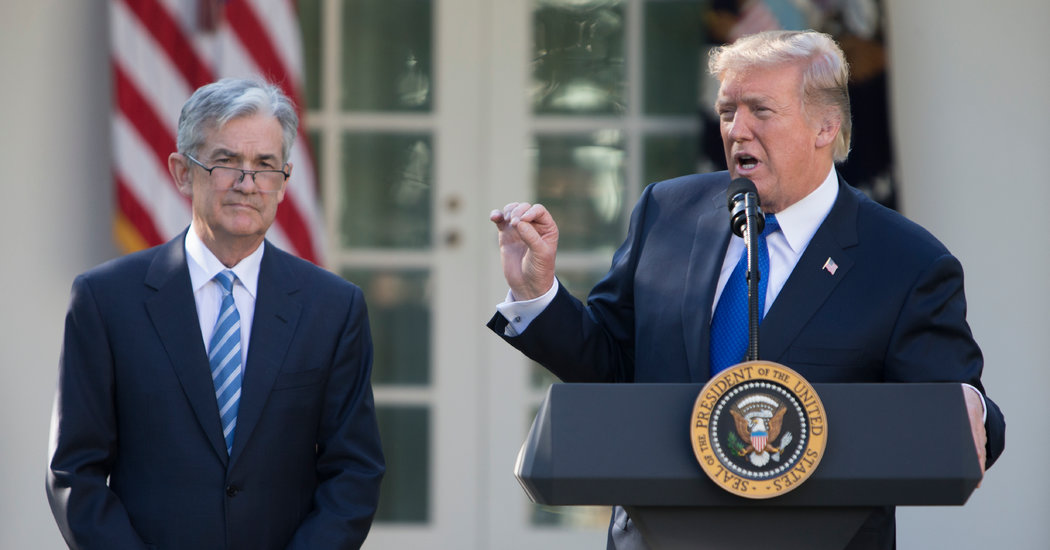 President Trump has made heckling the Federal Reserve, and its chair, Jerome H. Powell, something of a sport. He has berated Mr. Powell for raising interest rates and taking steps to end a crisis-era stimulus program, likening the Fed to a powerful golfer who has “no touch” and cannot win.

The past provides some precedent for that frayed relationship.

The executive branch had avoided complaining about the Fed or interest rate policy since the Clinton administration, after officials determined that criticizing the independent central bank was a bad approach and leaving it alone would lead to better economic outcomes.

But Mr. Trump quickly dumped that doctrine and returned to an old pattern of blaming the Fed for not doing more to help the president by lifting the economy. His grievances echo those voiced by presidents in the 1960s and ’70s, though his favored delivery channel — a social media account with more than 60 million followers — is far more public.

Below is a timeline of Mr. Trump’s comments, a history of the White House’s relationship with the central bank and a dive into the practicalities of an untested development: the president’s recent flirtation with stripping Mr. Powell of his chair title and demoting him to a Fed governor. Such a move, if it worked, could allow Mr. Trump to install a new chair — one who would ostensibly vote in favor of lowering rates more quickly.

[Can the president demote the Fed chair? It depends.]

Candidate Trump accused the Fed of being too political. As president, he has encouraged its politicization.

Mr. Trump’s Fed rhetoric has evolved since he was a presidential candidate accusing the agency of keeping rates low to help President Barack Obama. More recently, he has accused the Fed and Mr. Powell, whom he appointed as the chair, of undercutting his economic policies by keeping rates too high.

“The interest rates are kept down by President Obama. I have no doubt that that’s the reason that they are being kept down — now as a real estate person, I love it.” — Mr. Trump, speaking to CNBC

Mr. Trump, a real estate developer with a fondness for borrowing money, said he personally favored low rates. But that did not stop him from claiming that the Fed was keeping rates low to benefit Mr. Obama. The Fed cut rates to near zero in the wake of the financial crisis, when the economy was mired in a recession, and lifted them just twice during Mr. Obama’s tenure as it tried to give the economy room to recover.

“I do like a low-interest-rate policy, I must be honest with you.” — Mr. Trump, speaking to The Wall Street Journal

When asked about the Fed’s policies in 2017, Mr. Trump stopped short of criticizing the central bank or its chair, Janet L. Yellen, who was embarking on a slow but steady plan to return interest rates to a more normal level as the economy grew more steadily. The Fed lifted rates three times in 2017.

“I don’t like all of this work that we’re putting into the economy and then I see rates going up.” — Mr. Trump, speaking on CNBC

The president broke with recent White House precedent in July 2018. Mr. Trump, with the help of Republican lawmakers, had pushed through a $1.5 trillion tax cut in December 2017, a move he said would increase economic growth to as much as 5 percent. The Fed raised rates to keep the economy from overheating, but Mr. Trump saw those moves as working against his economic policies.

“My biggest threat is the Fed. Because the Fed is raising rates too fast, and it’s independent, so I don’t speak to him, but I’m not happy with what he’s doing.” — Mr. Trump, speaking to Fox Business Network

The Fed had raised rates three times already in 2018, prompting Mr. Trump to accuse the central bank and Mr. Powell of posing the biggest threat to the American economy. Those remarks did not deter the Fed — it voted for a fourth increase in December 2018.

Chatter about a firing

“I think he put out a tweet last night specifically saying he now realizes he does not have the authority to fire.” — Mick Mulvaney, who had recently been named the acting White House chief of staff, on ABC

That fourth rate increase fueled Mr. Trump’s ire and the president privately talked about firing Mr. Powell, telling advisers that the Fed chair would “turn me into Hoover,” a reference to the Great Depression-era president.

“China will be pumping money into their system and probably reducing interest rates, as always, in order to make up for the business they are, and will be, losing. If the Federal Reserve ever did a ‘match,’ it would be game over, we win!” — Mr. Trump, on Twitter

With his re-election campaign looming, Mr. Trump has increasingly focused on the strength of the economy and portrayed the Fed as the skunk at a garden party. Mr. Trump has repeatedly said that the economy would take off like a “rocket ship” if not for Mr. Powell and that the stock market could be 5,000 to 10,000 points higher if the Fed had done its job “properly.” He has urged the Fed to start cutting rates, saying it is putting America at a disadvantage relative to its trading partners, like China and Europe.

On the eve of a major Fed meeting, Bloomberg reported that the White House had looked into the legality of stripping Mr. Powell of his chair title and demoting him to a governor. The president himself seemed to imply that it was a possibility while talking with reporters on June 18. After the Fed’s June 19 meeting, at which the central bank signaled that rate cuts could be coming soon, Mr. Trump repeated in a television interview that he was unhappy with the Fed but said he had never suggested demoting Mr. Powell — though he said he believes he has the authority to do so.

A legacy of Fed bashing

“I was stunned. Not only was the president clearly overstepping his authority by giving an order to the Fed, but also it was disconcerting because I wasn’t planning tighter monetary policy at the time.” — Paul A. Volcker, former Fed chair, in his memoir “Keeping at It”

Other presidents have also seen the Fed as their nemesis.

By lifting rates, the central bank restrains economic growth in hopes of making it more sustainable into the future. Politicians, focused on their legacies and re-elections, do not like it when that happens on their watch.

Lyndon B. Johnson famously warred with his Fed chair, William McChesney Martin Jr. By some accounts, he pushed Mr. Martin against a wall at his Texas ranch and dressed him down over monetary policy at one contentious meeting in 1965.

Richard M. Nixon also pressured Mr. Martin’s successor, Arthur Burns, to keep rates low. The White House had its way, and many economists partly blame the Fed’s capitulation for the runaway inflation of the 1970s.

Mr. Volcker, who was the Fed chair from 1979 to 1987, said in his recent memoir that during a 1984 White House meeting with Ronald Reagan and James A. Baker III, then the chief of staff, Mr. Baker declared that “the president is ordering you not to raise interest rates before the election.” Mr. Volcker, who had not planned on raising rates and found the attack to be an overstep, walked out without replying.

Fast-forward to the early 1990s, and Bill Clinton’s team convinced him that grousing publicly about the Fed was useless: The independent central bank would and should set policy as it saw fit based on economic conditions.

A hands-off approach lasted for a quarter-century — until after Mr. Trump’s election.

To fire, demote or wait it out?

“I think the law is clear that I have a four-year term, and I fully intend to serve it.” — Mr. Powell, at a June 19 news conference

As Mr. Trump’s displeasure with the Fed has mounted, his administration has explored how to rid itself of Mr. Powell.

Based on the Federal Reserve Act, the central bank’s governors can be removed from their 14-year terms only for cause. The chair is a governor, so he is nearly impossible to outright fire. Instead, Mr. Trump has reportedly toyed with demoting Mr. Powell to a simple governorship.

It remains unclear whether that is possible: There has never been an attempt, so there is no court precedent. Because of the 1977 Federal Reserve Reform Act, the Senate separately confirms the chair to a four-year term, so Congress could bring a lawsuit if Mr. Trump tried to remove Mr. Powell. Mr. Powell has said that he thinks the “law is clear” and that he has his role for the duration.

Mr. Trump’s better chance of getting rid of Mr. Powell will come in 2021, when his term runs out. If Mr. Trump is re-elected, he could choose to appoint a new Fed chief.

Even then, he would have to get his nominee through Congress, which has been unwilling to confirm Mr. Trump’s more unconventional picks for the Fed Board.