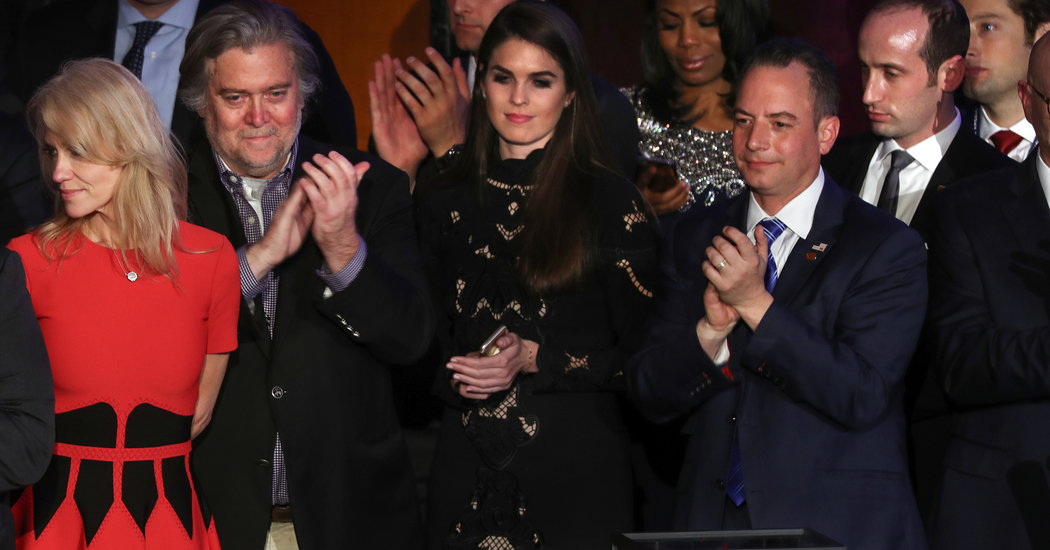 A database of the employees, assembled through hundreds of open records requests, has been posted online by ProPublica. It offers a comprehensive look at how Mr. Trump is influencing the direction of the federal government, beyond high-profile cabinet appointments and other Senate-confirmed posts, and how he has rewarded people who have been loyal to him or share his priorities.

Handing out political jobs to former campaign workers, like-minded experts, lawyers and erstwhile lobbyists is a grand tradition in Washington, where, to the victor, go the spoils. Each president has about 4,000 political posts to fill; separately, there are two million civilian federal workers who are largely hired through a competitive process.

Just over a year into his presidency, Mr. Trump has yet to formally nominate candidates for nearly 35 percent of the 639 positions needing Senate confirmation, according to the Partnership for Public Service, a nonprofit group that tracks federal appointments. Mr. Trump arrived at the White House without a large contingent of well-known Washington names at the ready, and some jobs have been filled with people new to government or lacking experience in the fields where they now work, according to a review of financial disclosures.

No comparative database exists from previous administrations, but scholars and other experts on presidential transitions say the Trump appointments stand out.

“Overall, my reading is that the Trump political appointees have less expertise, in their respective areas, than any presidential administration dating back to at least the Reagan era,” said Thomas E. Mann, a senior fellow at the Brookings Institution who reviewed the database. Mr. Mann has specialized in federal government studies for four decades and has tracked the process that previous administrations have used to fill political jobs.

“The president selects the highest caliber of individuals from an array of backgrounds and experiences to fill positions in his administration,” she said in a statement. “We are proud that these individuals — whether they worked on the campaign, conservative think tanks or elsewhere — share the president’s vision that got him elected.”

Agency officials added that these new political hires had brought value to government. For instance, Heather Nauert, a State Department spokeswoman, said in a statement that Matthew Mowers, the former Trump campaign official who recently traveled to South Africa, provided a “fresh focus and renewed passion for helping women, children and men who are living with H.I.V./AIDS.”

Mr. Mowers, who had also worked on the presidential campaign of Chris Christie, the former governor of New Jersey, is chief of staff in the Office of the U.S. Global AIDS Coordinator. Last month, he tweeted from South Africa, “Great meeting today with Ministry of Health Officials in Johannesburg.”

One of the top sources of the appointees has been the presidential campaign, according to the database. Some of the people listed in the database have already left the Trump administration, but it offers a snapshot of those hired for political jobs in the past year. At the White House alone, there have been almost 60 former campaign workers. In addition, about 20 have been hired at the Energy Department, and another 20 or so at the Commerce Department.

Some of the Commerce jobs have been filled with people who have extensive experience in government or the private sector. One of them is Mira Ricardel, the under secretary for export administration, whose career includes stints at Boeing, at the Defense Department and on Capitol Hill. During the campaign, she was a consultant to Trump for America.

Others hired at the Commerce Department had limited work experience. Jonathan Wardell, the aide in the secretary’s office, graduated in 2016 from Stony Brook University in New York. William Reinert, who works in the public affairs office, graduated from Troy University in Alabama in 2016; his résumé cites six months with the Trump campaign and other short-term jobs, including on Capitol Hill.

The former campaign field worker who now promotes sales of nuclear energy equipment abroad is Cameron Dorsey, a 2014 graduate of Washington and Lee University in Virginia who also worked briefly for the Republican National Committee and a political consulting firm, according to her financial disclosure form.

The Commerce Department did not comment on the experience level of some of its recent hires. But Secretary Wilbur L. Ross Jr. said in a statement that the department sought the best candidates for positions, adding, “It is important that young people show interest and get involved in public service.”

At the State Department, political appointees include Taylor Bush, whose title is listed as special assistant. Mr. Bush was a field director for the campaign in Fairfax, Va., and also worked on the inaugural committee and at the Republican National Convention in Cleveland. The only other recent source of income listed on his financial disclosure form was a bartending job at the Hamilton Restaurant in Washington.

“The work of a special assistant requires someone who has good interpersonal skills, is well organized and who can handle multiple assignments simultaneously,” the State Department spokeswoman said in a statement. “Taylor Bush is a hard worker — he proved himself in these areas during the campaign and, as a result, was asked to join the State Department.”

The former lobbyists who have joined the administration include some who recently lobbied the agencies where they now work. Melissa F. Burnison, for example, was in February confirmed as an assistant secretary for congressional affairs at the Energy Department. As recently as the fourth quarter of last year, Ms. Burnison was involved in lobbying the department on behalf of the Nuclear Energy Institute, which represents the nuclear industry, according to lobbying disclosures.

An Energy spokeswoman said Ms. Burnison “will continue to comply with guidelines, waiver or no waiver.” Without an ethics waiver, she is prohibited from working on issues with which she was previously involved.

The administration has granted at least 31 waivers to some former lobbyists and others who had private-sector jobs that overlap with their new federal assignments, according to the database. Among them is Erik Baptist, a senior deputy general counsel at the Environmental Protection Agency. He previously worked for the American Petroleum Institute as a lobbyist on federal regulations related to renewable fuels.

The Heritage Foundation tops the list, according to the ProPublica tally, with at least 25 former employees now working for the administration.

Next is Freedom Partners, a nonprofit group led by the general counsel of Koch Industries, with 16 people who were compensated by the organization. They are among about 35 Trump political appointees who worked for or consulted with different groups affiliated with the billionaire libertarian brothers Charles G. and David H. Koch.

The conservative appointees are spread across the government. At the Interior Department, Ryan Nichols is an adviser in the Office of Water and Science, after coordinating the Heritage Foundation’s work with a group of climate change skeptics called the “Cooler Heads Coalition.” Also from the Heritage Foundation is Steven Groves, who works at the White House after writing forcefully against international agreements in collaboration with groups like the United Nations Human Rights Council.

It is an open question whether the tradition of filling lower-level political jobs with people loyal to the president, or at least grateful for a job, has much influence on policy. After all, the 4,000 positions account for a fraction of 1 percent of the federal work force.

“Most of them were excellent, some not so good,” said Eric L. Hirschhorn, a political appointee in the Commerce Department during much of the Obama administration. Because political appointees are not subject to civil service rules, he added, there was one advantage if they did not meet expectations. “It was a lot easier to get rid them,” he said.