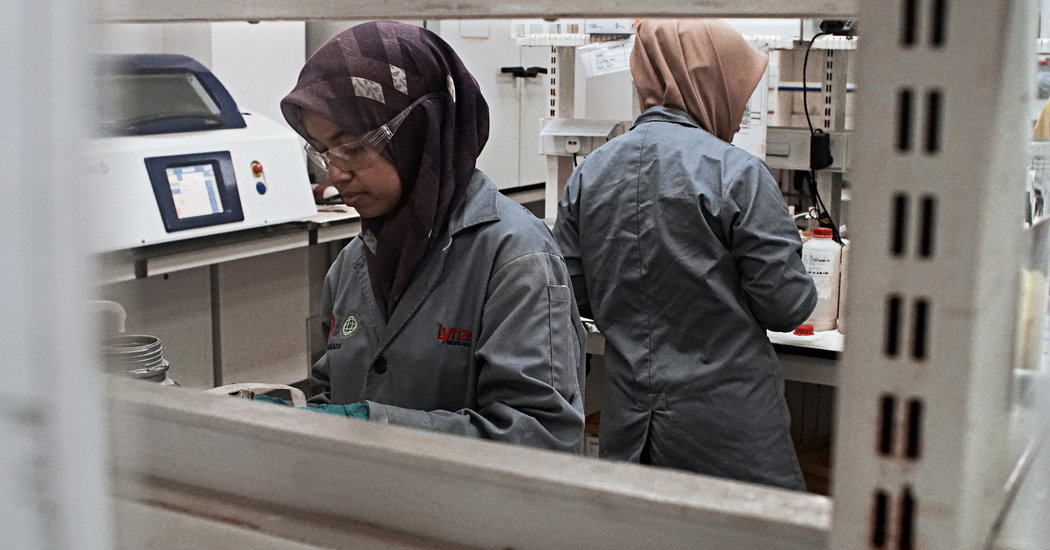 KUANTAN, Malaysia — Amanda Lacaze grabbed her iPhone and rattled off the names of the special minerals needed to make it. The screen was polished with lanthanum and cerium. The inside has a magnet made with neodymium and praseodymium.

Those minerals almost certainly came from China. Ms. Lacaze’s job is to give the world an alternative source, in case a global trade war spirals out of control and China cuts off supply.

Right now, she can’t. Her company, Lynas Corporation, can provide only a fraction of the minerals — known as rare earths — that China produces. And even that source isn’t a sure thing: The work is so volatile, complex and expensive that Lynas once came close to collapsing.

“There were times where we were sitting there and I’m saying, ‘Can we really afford to put coffee into the staff rooms?’” Ms. Lacaze said.

The Trump administration amped up its trade fight with China on Tuesday when it threatened to impose tariffs on an additional $200 billion in Chinese goods, ranging from frozen catfish fillets to copper wires to piston engines. China has threatened to match them dollar for dollar.

But it has other ways to retaliate beyond tariffs. It could refuse to buy American products, like planes from Boeing. It could intensify regulation of American companies doing business on the mainland. It could threaten to offload a piece of its huge portfolio of Treasuries, which could rattle the bond market.

And in one of its more strategic weapons, Beijing could use its dominance to cut off key parts of the global supply chain. China is the major supplier of a number of mundane but crucial materials and components needed to keep the world’s factories humming. They include obscure materials like arsenic metals, used to make semiconductors; cadmium, found in rechargeable batteries; and tungsten, found in light bulbs and heating elements.

They also include rare earths. A trade war risks putting those minerals in the middle of the conflict, potentially giving China a way to get back at the United States by cutting off supplies to American companies. Already rare earths have become embroiled in the conflict — they were among the long list released on Tuesday of Chinese-made goods that the Trump administration wants to tax.

China has used its control of rare earths to try to get its way before. In 2010, it stopped exports to Japan for two months over a territorial dispute. Speculators hoarded rare earth minerals, sending prices soaring.

“There is a hole in the western supply chain,” said Ryan Castilloux, the founder of Adamas Intelligence, a research firm.

It is hard to go a day without using rare earths. They are found in personal electronics like smartphones, televisions and hair dryers, and electric and hybrid cars.

They aren’t actually rare — they are made up of 17 elements found together in the ground all over the world. But turning individual minerals into useful material is complicated, messy and costly, as Lynas well knows.

Rare earth refining is done on a large scale in only two places on earth: China, and Lynas’s plant here in Kuantan, Malaysia, a sprawling industrial area on the coast of the South China Sea. The company mines rare earths out of a collapsed volcano in Australia and ships them to Kuantan to be refined.

Building that plant nearly sank Lynas. When Ms. Lacaze was named chief executive in June 2014, the company was struggling with $450 million in debt. Design flaws had delayed full production. It faced criticism from environmentalists.

With the business hemorrhaging cash, Ms. Lacaze slashed costs. She negotiated with impatient lenders, including hedge funds and a Japanese government agency that had backed Lynas because it was unsettled by China’s hold over the industry. She reduced rent and overhead by closing the company’s Australian headquarters and moved the company, her husband and herself to Lynas’s facility in Kuantan.

On a recent visit, Lynas technicians mixed rare earth concentrate, which looks to the untrained eye like unremarkable dirt, into chemical tanks that extract elements like lanthanum and cerium. Through a series of steps that take place in more than a dozen buildings, the resulting pinkish powder was funneled through oversize sieves into boxes on a conveyor belt and baked at 1,000 degrees Celsius.

“Just don’t hit the bag!” Ms. Lacaze said she likes to tell the forklift operators. “It’s like hitting a BMW.”

Ms. Lacaze, 58, was an experienced turnaround specialist who had worked in telecommunications and consumer products in Australia before coming to Lynas. In a drawl that hints at her Brisbane roots, she said she knew well the “glass cliff” phenomenon, in which organizations in crisis are more likely than successful businesses to offer leadership positions to women.

“Women more often get to do jobs like mine, where you clean up other people’s mistakes,” said Ms. Lacaze, wearing her signature pink work boots. She is one of fewer than a dozen women running the 200 biggest companies in Australia, where Lynas is publicly listed.

She has looked to elevate women at Lynas, often out of necessity as well as virtue. Unable to expand payroll during the the slump, Ms. Lacaze turned to current employees — often women — who worked in support roles like human resources and finance and shifted them to the factory floor to be operators, technicians and shift supervisors.

China is her most immediate challenge. Lynas is now profitable, but Ms. Lacaze sees a potential trade war between China and the United States as more of a threat than an opportunity. Beijing could keep rare earths off the market, depriving many American and European manufacturers of the minerals they need.

Lynas couldn’t compensate for it all. It accounted for only about 12 percent of world output of rare earths last year, according to Adamas, the research firm. Chinese companies accounted for more than four-fifths.

“If there is a full-blown trade war, I can’t believe that the Chinese wouldn’t use rare earths as part of that,” Ms. Lacaze says. If China wanted to restrict the supply of rare earths by sticking tariffs on rare earth products or stopping exports outright, “they could do it, literally overnight.”

Under that scenario, companies would look for alternatives to rare earths. Tesla Motors, for example, briefly turned to engines that don’t use rare earths after the 2010 price surge. That could hurt Lynas’s business.

The Association of China Rare Earth Industry, an industry group controlled by the Chinese government, did not respond to a request for comment.

Even if it doesn’t disrupt the supply, China will likely keep its grip over the market for rare earths for a long time to come. It also dominates research and development of these minerals, giving it a leg up on the future, Ms. Lacaze said.

“I think there’s about 100 Ph.D.s in rare earths working in applications inside China and working in technology development,” she said. “To my knowledge, do you know how many Ph.D.s there are outside of China?” With the fingers of her right hand, she made a zero.

For other countries, that means depending on China for a long time to come, she said.

“It doesn’t scare me,” Ms. Lacaze said, “but it should scare policymakers.”