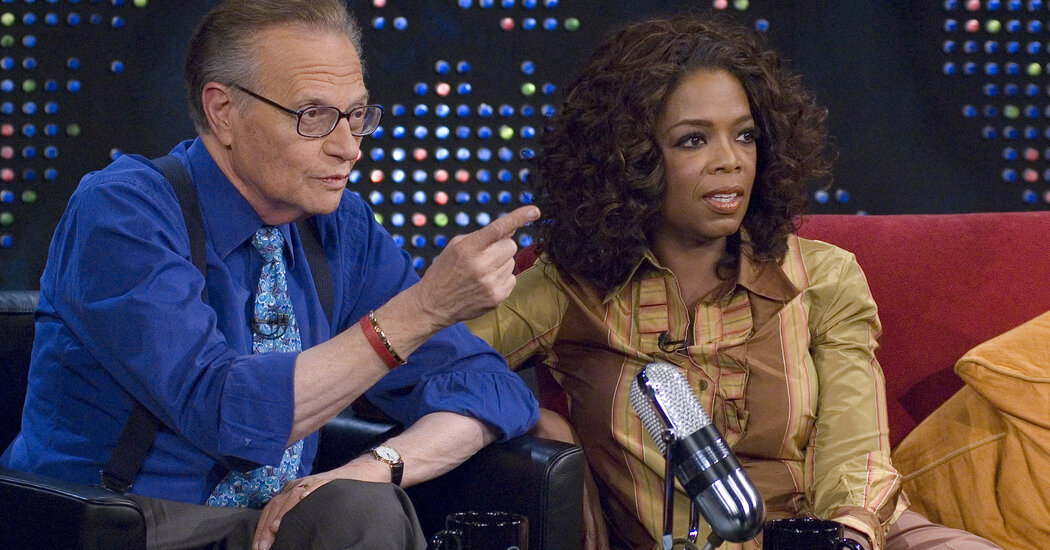 Celebrities, news anchors and politicians were among the many people remembering Larry King, the host of the CNN program “Larry King Live,” who died on Saturday at 87.

“Larry King was a giant of broadcasting and a master of the TV celebrity/statesman-woman interview,” Christiane Amanpour, CNN’s chief international anchor, tweeted.

“His name is synonymous with CNN and he was vital to the network’s ascent,” she said. “EVERYONE wanted to be on Larry King Live.”

Oprah Winfrey said: “It was always a treat to sit at your table. And hear your stories. Thank you Larry King.”

Wolf Blitzer, host of “The Situation Room” on CNN, called Mr. King “an amazing interviewer and a mentor to so many of us.”

The television host Ryan Seacrest said he had “lost a dear friend and mentor. Truly an American treasure.”

“He taught me so much,” the former CBS late-night host Craig Ferguson said.

“He was a true mensch,” Mr. Ferguson added. “He probably even taught me that word.”

Ted Turner, the founder of CNN, said that “the world has lost a true broadcasting legend.”

From 1985 to 2010, Mr. King anchored “Larry King Live,” CNN’s highest-rated and longest-running program. He interviewed a disparate range of subjects, from President Richard M. Nixon to royalty to “experts” on U.F.O.s and paranormal phenomena.

He died at Cedars-Sinai Medical Center in Los Angeles. A statement from his company, Ora Media, did not specify a cause of death, but Mr. King had recently been treated for Covid-19. In 2019, he was hospitalized for chest pains and he said he had also suffered a stroke.

A tweet from the television host Piers Morgan raised eyebrows on Saturday. “Larry King was a hero of mine,” he wrote, “until we fell out after I replaced him at CNN & he said my show was ‘like watching your mother-in-law go over a cliff in your new Bentley.’”

But, Mr. Morgan continued, “he was a brilliant broadcaster & masterful TV interviewer.”

Former President Bill Clinton said he enjoyed his “20+ interviews” with Mr. King, adding, “He gave a direct line to the American people and worked hard to get the truth for them, with questions that were direct but fair.”

Gov. Andrew M. Cuomo of New York honored Mr. King, who was raised in Brooklyn, as “a Brooklyn boy,” tweeting that “New York sends condolences to his family and many friends.”

Newt Gingrich, the former speaker of the House of Representatives, hailed Mr. King as a broadcast pioneer.

“I always loved doing his TV shows and occasionally he would ask me to guest host while he was on vacation,” Mr. Gingrich tweeted, noting that an episode featuring animals from the Columbus Zoo was among his favorites.

Celine Dion said Mr. King “made all of us feel as though we were speaking with a lifelong friend. There will never be anyone like him, and he will be missed by many.”

The basketball star Magic Johnson said he had known Mr. King since arriving in Los Angeles 42 years ago.

“Larry King Live” changed CNN in the 1980s, with its blend of entertainment and news, he said. “I loved being on the show,” he said. “Larry was one of the best interviewers on TV.”

Greta Van Susteren, the host of “Full Court Press,” tweeted that a New York Times news alert referring to Mr. King’s interviews with “presidents, psychics, movie stars and swindlers” showed “he had so much breadth.”

“Unlike some who can only interview one type of guest (e.g., politicians),” she said, “Larry could interview ANYONE and he did and he interviewed EVERYBODY.”