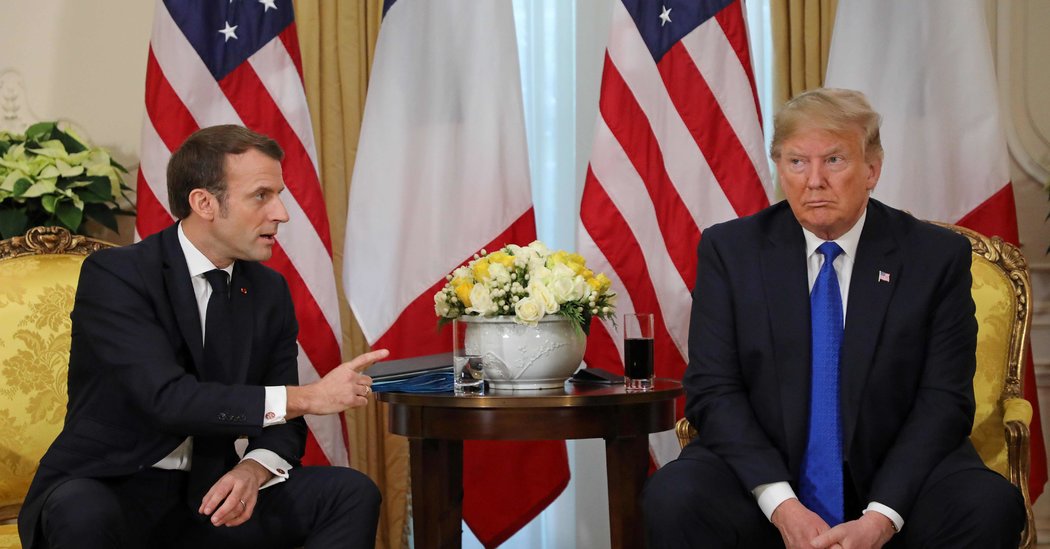 International tax and trade rules cannot address the disruption to national economies that technology giants like Amazon and Facebook cause, writes the WSJ’s Greg Ip.

Instead of working together on a solution, individual nations are going it alone, as events this week show:

• The Trump administration said on Monday that a French tax on digital services discriminated against the United States, a declaration that could lead to retaliatory tariffs.

• But Treasury Secretary Steven Mnuchin followed on Tuesday by urging countries to suspend targeted taxes on digital services and called for a multilateral deal.

That stance is ironic, Mr. Ip writes: “Unilateralism is the hallmark of Mr. Trump’s approach, in steel, cars and his trade war with China.”

Even if an international agreement were to be reached, other challenges would await, including climate change and cyberhacking. “Individual nations will be sorely tempted to pursue their own solutions if international cooperation fails,” Mr. Ip writes.

The tech fight has produced an unlikely alliance between Mr. Trump and Silicon Valley, writes the FT’s James Politi.

The president is spending significant energy protecting tech giants from digital taxes to maintain America’s edge over China in areas like artificial intelligence.

“Yet Trump is treading a politically delicate path as he tries to help Big Tech improve its access to foreign markets at a time when the sector is increasingly becoming a punching bag in Washington,” Mr. Politi writes.

Economists have long viewed large tax increases as a drag on growth. Senator Elizabeth Warren, a presidential candidate, and other leading Democrats are challenging that orthodoxy, reports the NYT’s Jim Tankersley.

In doing so, they hope to upend Democratic policymaking in the same way that supply-side conservatives changed Republican orthodoxy four decades ago.

Higher taxes reduce investment, which slows economic growth, the consensus held. That drag has been thought to offset the benefits to growth that come with increased government spending in areas like education.

Ms. Warren and other Democrats say the opposite: that taxing the rich and spending the revenue to lift the poor and middle class would accelerate economic growth.

Some liberal economists go further, saying that taxing the rich would help growth no matter what the government did with the money.

Two top executives at Expedia are out

A major shake-up has come to the travel company after its top executives clashed with the board and its chairman, Barry Diller, over a restructuring plan it started this year.

The website, which helps travelers find hotel rooms and flights, said yesterday that Mark Okerstrom, its C.E.O., and Alan Pickerill, its financial chief, would step down immediately, the WSJ reports. Expedia’s brands include Hotels.com, Orbitz, Travelocity, Hotwire and CarRentals.com.

Online-focused travel companies are struggling to navigate shifts in how Google delivers information to customers, and say that the changes have made their hotel listings less visible.

The search giant redesigned its hotel-search function last year to make it easier for people to find hotels by price and browse amenities, decreasing the amount of business that some brands received, according to Justin Patterson, a research analyst with the financial services company Raymond James.

Expedia’s stock, after losing 12 percent in 2019 through Tuesday, rose 6.2 percent after news of the ouster.

Mr. Diller said he would buy additional shares in the group “as a tangible sign of my faith in and commitment to Expedia’s long-term future.” In an email to employees, Mr. Diller wrote: “There is no way I can tell you this isn’t a difficult day. But I can tell you that this momentary misstep also represents a new beginning,” the FT reports.

Viacom and CBS reunite after over a decade apart

CBS and Viacom have reunited.

The two companies closed their merger yesterday, reports Edmund Lee of the NYT, bringing together assets that include the broadcast network CBS, the publisher Simon & Schuster, Paramount Pictures and the cable outlets MTV, Nickelodeon and Comedy Central.

Those businesses once dominated the media and entertainment industries but are now fighting to stay relevant in an increasingly digital world.

The merger is meant to make ViacomCBS, as the new company will be called, a bigger player in digital entertainment. Unlike its streaming rivals, ViacomCBS will focus on selling its wares to the highest bidder as demand for original content increases.

The number of streaming subscribers around the world surpassed the number of cable subscribers for the first time last year, and Netflix, Amazon, Hulu and other platforms are fighting to attract customers who have cut the cord or are close to doing so.

The deal is a victory for Shari Redstone, who has been a trailblazer as president of National Amusements, the conglomerate that controls CBS and Viacom. Some analysts are skeptical, though, saying that the merger may not be enough to fend off the decline in traditional television.

For Google, departures were a long time coming

They took the long view, and then they left.

When Google’s co-founders said they were stepping down from day-to-day executive roles at Alphabet, Google’s parent company, the move may have felt sudden. But it was the culmination of a yearslong separation between two of Silicon Valley’s most prominent founders and the company they started 21 years ago, the NYT reports.

The two leaders, Larry Page and Sergey Brin, have been drawing down their daily involvement for years, ceding managerial tasks to deputies in order to focus on a variety of projects. Running a business bored them, observers said, and what they really wanted to do was innovate.

“They’re accidental entrepreneurs,” said Shane Greenstein, a Harvard Business School professor who has studied Google and its founders. “They probably still harbor a desire to be a professor with a lab.”

It now falls to Sundar Pichai to lead Google through its most difficult period yet. As C.E.O. of both Google and Alphabet, Mr. Pichai faces legal and regulatory challenges on two continents, conflicts with its own workers and sinking public opinion in its brand.

Steven Cohen is in talks to buy the Mets

The billionaire, a minority investor in the New York Mets, is negotiating to buy a controlling stake in the team, write the NYT’s Kevin Draper, Emily Flitter, Danielle Allentuck and Kate Kelly, citing unnamed sources.

The deal would be a step in the re-emergence of Mr. Cohen, who once reigned as one of Wall Street’s richest and most powerful hedge fund managers.

• Mr. Cohen would buy 80 percent of the team from Fred Wilpon, the team’s controlling owner, and his son Jeff, the chief operating officer.

• A completed deal is not imminent and is subject to approval by Major League Baseball owners.

• Regulators questioned him in 1986 about his trades in shares of RCA ahead of its deal with General Electric.

• Federal prosecutors filed criminal charges against his hedge fund, S.A.C. Capital Advisors, in 2013, but not Mr. Cohen personally. He retreated after selling off a portion of his art collection and paying $1.8 billion to settle the charges.

“Mr. Cohen is on the verge of gaining the kind of exposure that comes only with owning a major sports franchise in a world capital at a time when team owners, such as Mark Cuban, are among the country’s biggest celebrities,” the reporters write.

• John Hamilton, Boeing’s chief engineer, who has been leading the company’s response to the 737 Max crisis, is retiring. (CNBC)

• A subsidiary of LG Chem of South Korea will invest more than $900 million to create a venture producing batteries for electric cars with G.M. (NYT)

• Despite a Chinese conglomerate’s plan to buy all of British Steel, the failed manufacturer’s French factory is for sale separately. (FT)

• PG&E is close to finalizing terms for a $13.5 billion payout to victims of wildfires, a key step toward resolving its bankruptcy. (Bloomberg)

• The Italian tax authorities have claimed that Fiat Chrysler underestimated the value of its American business by $5.6 billion. (Bloomberg)

• Hospital groups sued the Trump administration over a new federal rule that would require them to disclose the discounted prices they give insurers. (NYT)

• The Trump administration finalized a rule on work requirements that would remove nearly 700,000 people from the federal food stamp program. (NYT)

• Transitioning to a more equitable health care system might eliminate some jobs. But the status quo is morally untenable. (NYT Opinion)

• Three scholars invited by Democrats testified that evidence of Mr. Trump’s efforts to pressure Ukraine for political gain clearly met the definition of an impeachable abuse of power. A fourth scholar, invited by Republicans, disagreed. (NYT)

• The Republicans’ witness said lawmakers were rushing the impeachment process and should instead allow court fights over access to witnesses to play out. (NYT)

• Rudy Giuliani, the president’s personal lawyer, has been in Budapest and Kyiv this week to talk with former Ukrainian prosecutors for a documentary series intended to debunk the impeachment case. (NYT)

• Led by consumer preferences and tariffs, companies are expanding their American furniture production. But they’re encountering a dearth of skilled workers. (WSJ)

• The U.S. and China are reportedly moving closer to agreeing on the amount of tariffs that would be rolled back in a trade deal. (Bloomberg)

• Huawei is challenging the F.C.C. in court for choking off the company’s sales in the U.S. And Prime Minister Boris Johnson of Britain vowed not to involve the company in 5G telecommunications networks if doing so compromised the country’s ability to work with close security allies like the U.S. (NYT, FT)

• Second chances for men accused of sexual harassment are common in the tech industry. (FT)

• Jay-Z, who pulled most of his albums from Spotify in 2017 in favor of his rival Tidal platform, has returned his music to the streaming service. (Bloomberg)

• Scientists are questioning the ethics of studies backed by Chinese surveillance agencies, and prestigious journals are taking action. (NYT)

• EU leaders believe the euro needs to expand its role to compete against the U.S. and China. (FT)

• A roundup of people who influenced business, entertainment, finance, politics, science and technology in 2019. (Bloomberg Businessweek)

• The resilience of the American consumer will stave off a recession, the theory goes. That confidence may be misplaced. (Bloomberg Opinion)

• Officials in the Florida Keys announced what many have long feared: As seas rise and flooding worsens, not every home can be saved. (NYT)

• Why cruise ships are being “stretched”: “For cruise lines, it’s a quicker way to expand capacity compared to building a new cruise ship.” (Bloomberg)

Thanks for reading! We’ll see you tomorrow.