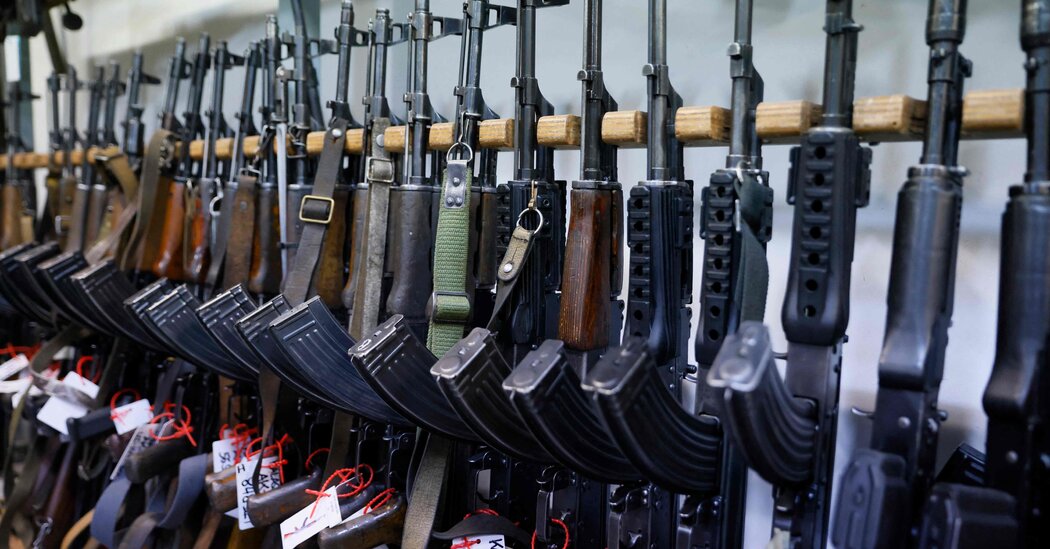 LOS ANGELES — Hollywood was in a state of shock on Friday, one day after Alec Baldwin fired a gun being used as a prop on a New Mexico film set, killing a cinematographer and wounding the director. Real firearms are routinely used while cameras are rolling, and injuries of any kind are rare. The reason is that safety protocols for firearms on sets are well established and straight forward.

Weapons must be tightly managed by an armorer, sometimes credited on films as a “weapons master,” who holds various government-issued permits. Some states, for instance, require an entertainment firearms license in addition to standard gun licenses. Cast members should be trained in gun safety in advance. Guns should never be pointed directly at anyone, especially in rehearsals but even during actual filming, since camera trickery can be used to compensate for the angle. If necessary, plexiglass is used to protect the camera operator and surrounding crew members.

And no live ammunition, ever.

“Protocol had to have been broken,” said Daniel Leonard, an associate dean of Chapman University’s film school who specializes in set procedures. “We will have to see what the details are, but the industry has a very specific set of guidelines to follow to prevent something like this from happening.”

Weapons on sets vary. Some are rubber props (used for shots when actors are far in the distance) and others are airsoft guns that fire nonlethal pellets. Often, however, productions use real guns.

Studios prefer to digitally create the actual firing in postproduction whenever possible. Sometimes it is not. Even in a filmmaking age where visual-effects artists use computers to convincingly create disintegrating cities, it can be difficult to replicate the weight and recoil of a real gun, studio executives say. Some actors have a hard time faking it.

Depending on the complexity of the scene, effects wizardry is also expensive, Mr. Leonard noted, and independently financed movies like “Rust,” the film that Mr. Baldwin was making in New Mexico, operate on shoestring budgets.

When the guns need to be fired, they are loaded with blanks, which are cartridge cases with no bullets. People tend to think that blanks are like toy cap guns for children — a little pop and some smoke. That is not the case. Blanks can still be dangerous because they involve gunpowder and paper wadding or wax, which provide a flame and spark, which look good on camera. (When people are injured by firearms on sets, it usually involves a burn, safety coordinators said.)

“Blanks help contribute to the authenticity of a scene in ways that cannot be achieved in any other manner,” David Brown, a Canadian movie firearms safety coordinator, wrote in American Cinematographer magazine in 2019. “If the cinematographer is there to paint a story with light and framing, firearms experts are there to enhance a story with drama and excitement.”

A production safety coordinator, working with the armorer, institutes rules for keeping a safe distance from the muzzle of a gun loaded with a blank. At least 20 feet is a rule of thumb, according to Larry Zanoff, an armorer for films like “Django Unchained.” Mr. Brown wrote that “safe distances vary widely depending on the load and the type of firearm, which is why we test everything in advance.”

“Take the distance that people need to be away from a gunshot, and then triple it,” Mr. Brown wrote. He declined a telephone interview on Friday but added in an email: “Firearms are no more dangerous than any other prop on set when handled responsibly. All the safety procedures in the industry make these situations virtually impossible when firearms are handled by professionals who give them their undivided attention.”

If a movie involves gunfire, safety planning usually begins long before anyone gathers on a set, according to studio executives who oversee physical production. First, the armorer is brought on board to analyze the script and, working with the director and prop master, decide what weapons are needed. Studios tend to work with the same armorers over and over again; one such expert, John Fox, has credits in 190 films and 650 episodes of television over 25 years.

Armorers own the weapons themselves or rent them; Mike Tristano & Company in Los Angeles has a vast prop gun inventory that includes AK-47s in blank-firing, blank-adapted and nonfiring versions. Armorers (or sometimes licensed prop masters) are responsible for storing them on set. Guns are not supposed to leave their hands until cameras are rolling; actors hand them back as soon as “cut” or “wrap” is called and the cameras stop.

“There’s a big difference between being an expert with firearms and handling them on a set,” said Jeremy Goldstein, a prop master and licensed armorer in Los Angeles whose credits include films for Netflix, Amazon and Universal. “On a set, you’re around people who have never held guns and who don’t understand the gravity of what can happen.” (Mr. Goldstein, like Mr. Zanoff and Mr. Brown, has no connection with “Rust.”)

Studios typically require any cast members who will be performing with firearms to undergo training on a shooting range in advance. There, they are taught safety and given general information about how guns work. Independent productions, for reasons of cost and time, may handle safety demonstrations on set. Various unions operate safety hotlines where anyone on set can anonymously report concerns.

It is not clear precisely what kind of gun was being used in “Rust,” what it was loaded with or what exactly was happening on the set when it was fired. It was also not known what kind of training the cast members had. “Regarding the projectile, a focus of the investigation is what type it was and how did it get there,” said Juan Ríos, a spokesman for the Santa Fe County Sheriff’s Office.

A New York Times reporter got a sense of what usually happens on a set right before a scene involving simulated gunfire. It happened in October 2015 on the Baton Rouge, La., set of the remake of “Roots.” Before the cameras rolled, a crew leader stood in the middle of the wooded location, with dozens of performers and crew watching, and gave a safety speech in an urgent, serious tone. The scene they were about to film involved cannons and gunfire from period weapons.

“All right everybody,” the crew leader said. “We have to discharge the gun. So we’re not playing with toys, guys. If something goes wrong, I’m going to yell cut, and we’re all going to back off calmly.

“The cannons are all faced out. We’ve all been through this training, we’ve rehearsed it over and over, we all get it. But pay attention, this is not a game. I keep saying that, guys. These guns are for real.”