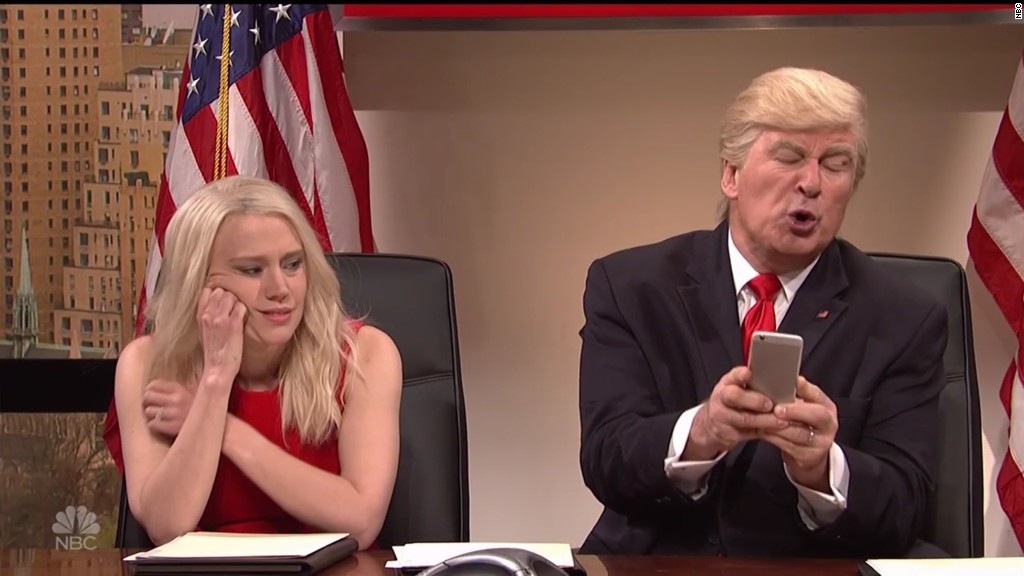 Look at an episode of “The Late Show” or “Jimmy Kimmel Live” from before the election, and then look at a recent episode. The shows are more pointed now. Some of them could be called “activist comedy.” At least a couple of the hosts are openly campaigning for Trump’s downfall.

Stephen Colbert, for example, called for the President to resign — six months ago. Kimmel and Seth Meyers have said the same thing at different points this year.

When the first indictments were handed down in the Robert Mueller probe last month, Colbert and his audience cheered the news: “Now, I know it’s almost Halloween. But it really feels more like Christmas.”

Late-night comics are channeling the hopes and fears of their left-leaning audiences. They are treating the Trump presidency as a crisis, but also as a tremendous opportunity.

That’s the subject of CNN’s prime time look at late night. “CNN Special Report: Late Night in the Age of Trump” will air Monday at 9 p.m. Eastern and Pacific.

For the documentary, we went inside the writers room for “The Daily Show with Trevor Noah,” where there’s almost no such thing as a “normal” production day anymore.

With the Trump presidency generating so much news, sometimes right up until taping time, “each night we’re just, like, rewriting the show almost on the fly,” said Steve Bodow, an executive producer of the show.

In an increasingly crowded late-night landscape, with more than a dozen options after 11 p.m., do Noah’s writers ever worry about making the same jokes as other shows?

“Yes, I mean, we think about it a little bit,” Bodow said, “But it happens less often than you would think.”

Trump supporters and conservative media critics have been sharply critical of the anti-Trump bent of Colbert’s “Late Show” and other talk shows.

They argue that it’s a turn-off to potential viewers. That may be true, but the existing audiences for these shows adore comedians like Meyers, Samantha Bee and John Oliver. The comics are saying out loud what the viewers at home are feeling.

Viewers tune in for “a certain decibel level, a certain level of outrage, a certain angle of critique,” said Giovanni Russonello, who writes a daily late-night column for The New York Times.

He started the column earlier this year when The Times “realized that Trump, through his own style, was redefining the landscape of late-night TV.”

The President, of course, has bemoaned the late-night shows and blasted Colbert and “SNL” impersonator Alec Baldwin in particular.

“The Baldwin impersonation just can’t get any worse. Sad,” he tweeted last December.

Joe Piscopo, a Trump backer who played Ronald Reagan on “SNL” in the 1980s, has a different view.

He said he learned a long time ago that, “you don’t cut funny.”

“If it’s funny, it’s going to hurt, but you gotta have a sense of humor about it,” Piscopo said.

So Trump should embrace his comedic critics?