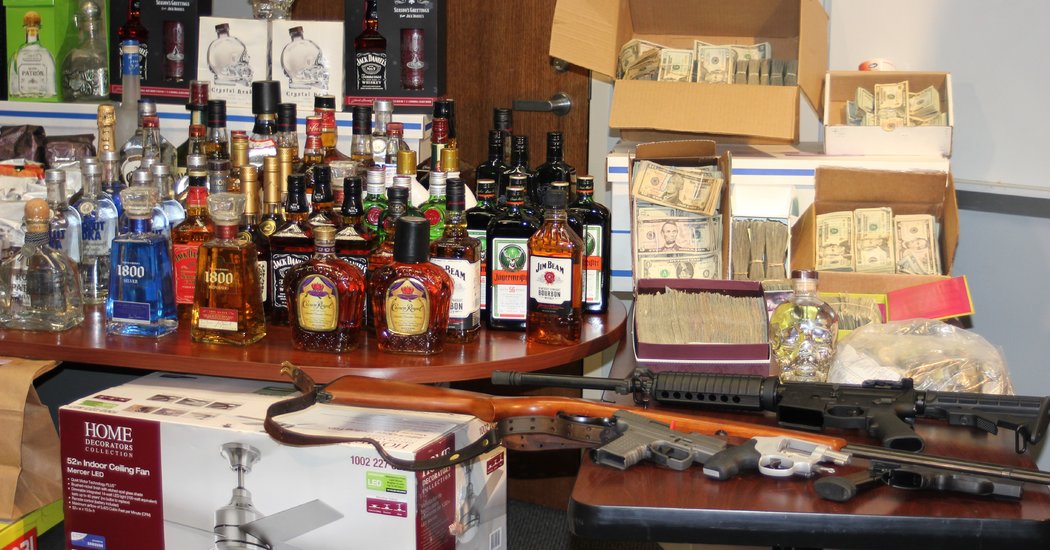 Until recently, at Cas Bar in Detroit, customers could get a beer or a shot of whiskey, or if they knew who to ask, an Instant Pot, a television or a few containers of air freshener.

The bar, on a corner of Michigan Avenue, with its wood-paneled walls, was home to a million-dollar organized retail fraud enterprise, according to Chief Ronald Haddad of the Dearborn Police Department in Dearborn, Mich.

The police raided Cas Bar last week, finding a hoard of stolen merchandise in the basement: pinball machines, stacks of energy drinks, alcohol, tools, a washing machine, Starbucks coffee, televisions, guns, ceiling fans, faucets and $600,000 stashed in a large box of Velveeta, the authorities said. The same day, the police also raided three other locations in the Detroit area that they suspected were used to store stolen merchandise.

In May, the authorities began surveilling the bar’s owner, Beverly Jo Sassin, after they arrested a man who had been accused of shoplifting “large amounts of alcohol” from a retail store in Dearborn, according to Chief Haddad. During an interview meant to determine if he needed help with drug addiction, the man explained to the police that he could “fence” the stolen goods at Cas Bar, the chief said.

“It was a criminal enterprise concealed in a legitimate business that was the bar,” Chief Haddad said on Wednesday.

As a fencing operation, the illegal business was perhaps most unusual because of the everyday items for sale, and for the shoplifters who apparently supplied them. The authorities believe Ms. Sassin had been running her retail fraud ring operation for several years, Chief Haddad said.

Last week, the authorities arrested Ms. Sassin, 70, who is known as Mama Jo, as well as three others — Jodie Beth Welbes, Christopher Buccanion and Amanda Lynn Mosed — in connection with the retail fraud ring, the police said.

All four were charged with felony racketeering, conducting a criminal enterprise, conspiracy to commit organized retail crime, and receiving and concealing stolen property, according to the police. Mr. Buccanion was also charged with two other felonies, the police said: possession of a weapon by a felon and possession of a firearm.

At the other locations they raided, the police found mountains of what they believe are new, stolen items, Chief Haddad said. The police believe people would go to retail stores in the Dearborn area, like Target, Kroger and Home Depot, he said, to steal items to be sold at Cas Bar.

The chief also discussed how “these types of crimes really impact everyone.” “When there is huge shrinkage at retail places, everyone gets that pain,” Chief Haddad said. Retailers “shut down and people lose jobs.”

“We want businesses to operate in our county, we want them to be successful, bring in jobs,” Fadwa Hammoud, the lead attorney for the business protection unit at the Wayne County prosecutor’s office, said during a news conference on Monday.

The authorities believe that Ms. Sassin had customers in place to buy certain items, Chief Haddad said; the stolen items found at Cas Bar were things that could expire or could not be stored for years at a time. “It was obvious that there was a quick turnaround time,” he said.

“The stolen property was purchased at a much devalued rate” before being sold, he added. “That’s where the profits came from.”

In 2016, The Detroit Metro Times profiled Cas Bar and interviewed Ms. Sassin, who had run the bar for two decades.

“I’m not a syrupy person. I’m from the hip,” Ms. Sassin told The Metro Times. “And I’ll tell you flat-out what I think, and I don’t really care if you like it or you don’t.”

“People come to a bar for two reasons,” Ms. Sassin added. “The company of other people, or they’re thinking about something, and they just need to drown their sorrows a little bit. It’s one or the other. Very few people say, ‘Oh, I’m here for the entertainment.’”