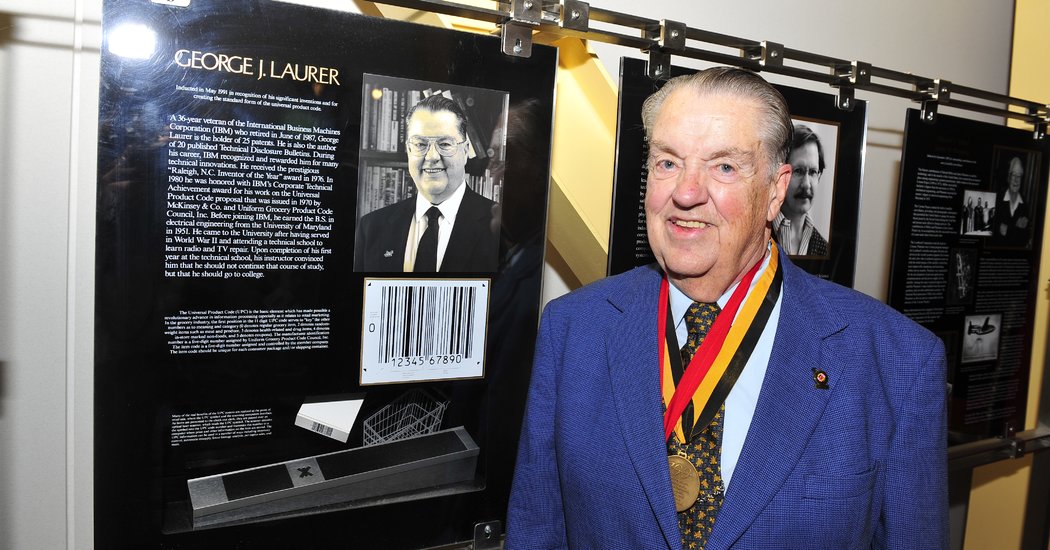 George J. Laurer, whose design of the ubiquitous vertically striped bar code sped supermarket checkout lines, parcel deliveries and assembly lines and even transformed human beings, including airline passengers and hospital patients, into traceable inventory items, died on Dec. 5 at his home in Wendell, N.C., near Raleigh. He was 94.

His death was confirmed by his son Craig.

The Universal Product Code made its official debut in 1974 when a scanner registered 67 cents for a 10-pack of Wrigley’s Juicy Fruit at a Marsh supermarket in Troy, Ohio. (The package of gum is now at the Smithsonian’s National Museum of American History.)

The concept that replaced price tags and revolutionized commerce had evolved over several decades, the result of fluky coincidences and the expertise of several collaborators.

The first of them, N. Joseph Woodland, an alumnus of the Manhattan Project, had perfected an efficient system for playing music in elevators and planned to market it commercially until his father intervened, insisting that the elevator music industry was controlled by organized crime.

Instead, Mr. Woodland returned to college. He was earning a master’s degree in the late 1940s when a supermarket executive visiting the campus urged experts at the engineering school to develop a practical means of digitally storing product data. With a classmate, Bernard Silver, Mr. Woodland devised a circular symbol resembling a bull’s-eye in which the information could be encoded. But they were ahead of their time: Commercial scanners and microprocessors that could interpret the code were not yet widely available.

In 1951, after abandoning a planned career as a television repairman, Mr. Laurer joined IBM, where he was asked to design a code for food labels modeled on the Woodland-Silver bull’s-eye and compatible with a new generation of optical scanners. But he found that the circular symbol was too blurry when reproduced on high-speed printing presses and instead developed a rectangular design, with 95 bits of data in binary code containing consumer product information.

Enter Alan L. Haberman, a supermarket executive who headed the Uniform Grocery Product Code Council, which was organized to choose a universal symbol. Mr. Haberman favored Mr. Laurer’s design, but the members of his committee were split.

Mr. Haberman reconciled their differences over dinner at a fancy San Francisco restaurant and then invited them to a screening of “Deep Throat,” at which they bonded even more viscerally. In April 1973, they unanimously voted for the bar code that has appeared on billions of items since.

The bar code sped checkout lines by some 40 percent, eliminated labor-intensive placement of price tags on every product, and resulted in fewer register errors and more efficient inventory controls. But Mr. Laurer often said that he was amazed at how omnipresent it became.

The code even made a cameo appearance in presidential politics and became lodged in urban legend.

During the 1992 primary campaign, it was widely reported, in The New York Times and elsewhere, that President George Bush was so out of touch that he was baffled by a supermarket bar code scanner he encountered at a grocers’ convention. (It turned out to be a prototype with advanced features that was not yet commonly available.)

Some fundamentalist Christians have also noted that the so-called three guard bars at the beginning, end and middle of the code resemble the numeral 6, suggesting the number 666, which the Book of Revelation links to an apocalypse.

“It is simply a coincidence,” Mr. Laurer said, “like the fact that my first, middle and last name all have six letters.”

George Joseph Laurer III was born on Sept. 23, 1925, in Manhattan. His father was a lawyer who became a Navy electrical engineer. His mother, Irma (Rudiger) Laurer, provided day care.

George was raised in New Jersey and Baltimore, contracted polio as a teenager and was drafted by the Army during World War II before he finished high school.

Discharged as a technical sergeant, he was collecting unemployment checks when he enrolled in a radio and TV repair course. After one year, he was persuaded by his instructor to quit, take a high school equivalency exam and enroll in college.

He graduated from the University of Maryland with a bachelor of science degree in electrical engineering in 1951 and also earned amateur radio and private pilot’s licenses.

He married Marilyn Slocum in 1954. She died in 2013. In addition to his son Craig, he is survived by two other sons, Mark and Jonathan; a daughter, Debra Laurer Cook; three grandchildren; and two great-grandchildren. His sister, Alma Laurer Albert, died earlier.

He worked for IBM at North Carolina’s Research Triangle Park until 1987. He received 26 patents, including for a hand-held scanner that reads bar codes.

He will undoubtedly be best remembered for the bar code, the original 11-digit formula (six identifying the manufacturer and five for the product; one was added later as a check) — which IBM did not patent, and for which he received no royalties. (Manufacturers pay a modest fee to administer the code.)

From the beginning, he said, the biggest challenge was to make each printed code and the optical and laser technology that scanned it more reliable than a human cashier.

“We learned that people will forgive the cute little grocery store clerk if she mischarges by a few cents,” he said. “If the clerk charges you 97 cents instead of 79 cents, no big deal — that’s O.K., it’s no real problem. But we don’t forgive computers, no matter how bad they are.”