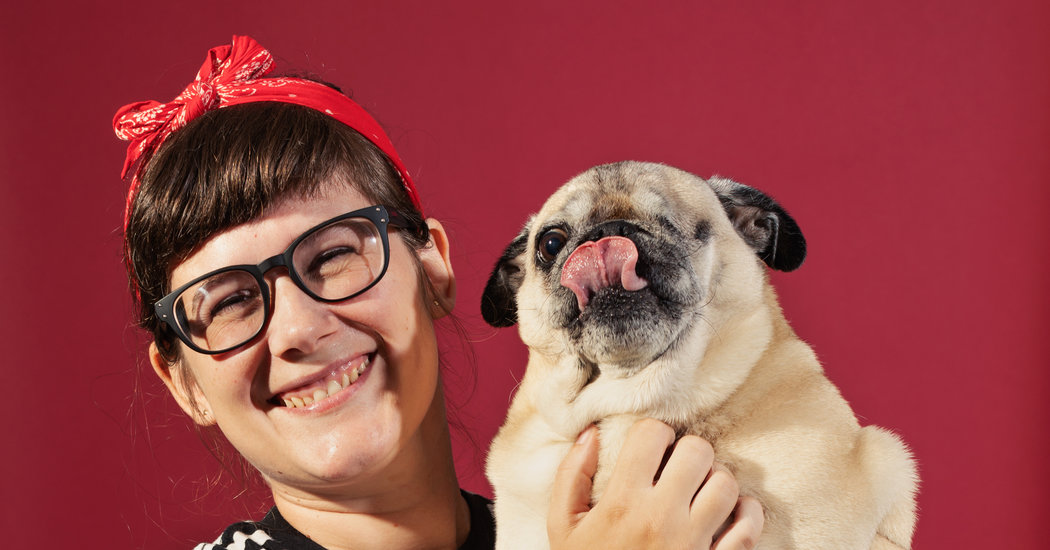 The coronavirus pandemic has barely changed everyday life for Gemma Correll, a cartoonist, pug lover, introvert and self-described “anti-socialite” based in Orange, Calif.

“I’ve always worked from home, had my morning coffee date with my dogs and never really gone anywhere,” she said.

But she has noticed one difference: People are slightly angrier than normal on social media, where, between Instagram and Facebook, she has more than a million followers. She tries to juggle promoting her work, connecting with followers — particularly on the topic of mental health — and dealing with, well, the trolls. “At the moment,” she said, “there’s a lot of unpleasantness.”

There have also been silver linings during the lockdown. Some work with advertisers and publishers has slowed down, leaving Ms. Correll, 35, more time to dedicate to other projects like the graphic novel she has been planning for years but has been too busy to focus on. When she started as a cartoonist 10 years ago, she took on just about any job, she said, but as her profile has grown, she has gravitated toward more personal projects.

Ms. Correll has also been cultivating mediocre hobbies that cannot be monetized. For independent artists on the treadmill of securing, creating and promoting their work, spending time on anything that is not directly furthering their ambitions can feel selfish — which is precisely the point.

6 a.m. Wake up to my dogs — Zander, a 3-year-old Chihuahua-pug mix, and Mr. Pickles, a 10-year-old pug — screaming for kibble. I drink some tea and try to read the news on my phone, but the Wi-Fi is out, so I give up and go back to sleep.

8 a.m. Haul myself out of bed for a second time, groggy and grumpy, and walk Zander. We grab coffee at Portola Coffee Roasters and then walk around the Chapman University campus, which has been delightfully quiet since quarantine began. I avail myself of their free public Wi-Fi to check the news and emails and play Words With Friends.

I’m trying to stay away from social media as much as possible. I recently started using a mood tracker and figured out that my worst days were the ones with high screen time.

2:50 p.m. Some of my commercial work has dried up because of the virus, so I have time to actually work on a book proposal I’ve been planning for about five years. It’s a graphic novel based on my experiences with anxiety. I want to create a book that I wish I had had when I was a teenager struggling and not really knowing what was wrong with me. I have notebooks and sketchbooks full of ideas, but they’re completely disorganized, so I gather those together and send the new written proposal to my literary agent. I had a lot of grand plans at the beginning of quarantine, which haven’t necessarily come to fruition, but I ticked one off the list.

Then I work on roughs — the initial sketches I do before drawing the final version — for the cover of a new middle school book I’m illustrating called “The Day the Screens Went Blank,” by the comedian Danny Wallace.

4 p.m. I go for a run. I am objectively bad at running and hate it because I feel like everybody is staring and/or laughing at me, so I try to make it bearable by listening to the “John Mulaney & the Sack Lunch Bunch” cast recording. I stretch after while my pugs lick the sweat off my legs. (Gross.)

8 a.m. Coffee date with Zander, then I spend the morning working on my biweekly comic for The Nib, an online comics site I’ve been contributing to since 2014. I’ve made quite a few Middle Ages-themed comics for them, and this one is about “Black Death Truthers,” playing on the coronavirus conspiracy theories I’ve seen floating around social media and the Facebook pages of certain older relatives.

I go down an internet rabbit hole of ridiculous Covid-19 conspiracy theories, then I go through my old sketchbooks to find notes about medieval lives from books and articles. I often have several disparate ideas on one page, like a design for a cat-themed enamel pin, a list of “pug yoga poses,” a drawing of a T. rex for some reason, and a rough script for a comic about phone anxiety. Once I have the comic planned out in my sketchbook, I draw up a rough using my graphic tablet.

12.30 p.m. My friend Evie, also known as the tattoo artist Show Pigeon, brings Lebanese food from Byblos, and we walk around the Circle, the central shopping district of Orange, to look in the antique malls. Evie finds an awesome vintage “Alice in Wonderland” paint-by-numbers for her tattoo studio wall.

9 a.m. Our Wi-Fi is back, so I answer emails but make the mistake of checking Facebook and immediately regret it. My comics aren’t particularly political or controversial, but I still manage to upset people. Some commenters on my recent comic, “8 Ways Not to Wear Your Face Mask” (examples: The Jaunty Chapeau, The Snacktime), have chosen to lecture me on the uselessness of face masks. I try not to engage too much. Maybe becoming a cartoonist wasn’t the best choice for someone as conflict averse as I am.

11 a.m. I drive 30 minutes to Carson to see the new Los Angeles pug rescue facility, where I’m painting a mural. I’ve gotten to know a lot of the pug rescues through events like the Vegas Pug Party, where I usually have a booth. (The Vegas Pug Party is exactly what you’d imagine, including a party bus full of pugs that goes down the Strip.)

For this mural, I want to do a big crowd scene with lots of different pugs and pug mixes. I’ve started using a projector for these large-scale projects because stuff was coming out a little wonky when I would do them freehand. I take some pictures of the space and measure the walls.

2 p.m. The original idea for “The Day the Screens Went Blank” was to make the cover look like a horror movie poster with just the main character, a 10-year-old girl. But the editor and designer ask to add in the entire family and relay a sense of chaos instead. There’s always a lot of back and forth at the beginning stages of books while we work out the tone and look.

5 p.m. I play on my digital piano. I believe every freelancer should have a hobby at which they are mediocre and therefore cannot monetize. When I make things like papier-mâché crafts and embroidery for fun, I’ll start thinking, “Maybe I should make more of these and sell them.” I am not great at playing the piano. I never had lessons, so I’m pretty sure I’m doing it wrong. Nobody is going to pay me for my clumsy attempts to play “Little Shop of Horrors” and jazz standards of the 1930s.

9 a.m. I sit in the closet for about an hour surrounded by pillows, using my friend’s professional microphone to record an interview about mental health and memes for a PopBuzz podcast. I don’t do a lot of spoken interviews or podcasts, and I was pretty nervous, especially since it was early and I am not a morning person. I felt pretty foggy headed even after chugging a coffee. I’m worried that I didn’t say anything useful and that I said “um” way too often.

10.30 a.m. Speak to my friends Mel and Siofra in England. I also pop into my husband Anthony’s call with his parents in Cyprus. I’ve spoken more in one morning than I usually do in a week. I feel pretty tired.

1 p.m. I get stuck working on the last panel for the rough draft of my comic for The Nib. Simplicity and straightforwardness is a lot harder than it looks. I eliminate some unnecessary text but need some kind of punchline that would point out the fact that people in the Middle Ages didn’t know what the plague was caused by, so they had a little more of an excuse being ridiculous about it than we do about the coronavirus now.

I get frustrated overthinking it and take a walk to clear my head. Walking or something meditative like playing the piano or doodling aimlessly usually helps when I’m suffering from a creative block.

4 p.m. I talk to Anthony, who is a collage art illustrator, about the comic. He suggests the obvious solution I couldn’t see. Often he’ll be able to look at something as it’s nearly finished and he’ll be like, “Why don’t you just do this?” We have separate studios in our home, which works well because I listen to a lot of musical theater, murder podcasts and John Mulaney stand-up — stuff I know by heart already, so I’m not too distracted by it. He listens to hipster bands.

5 p.m. Pug walk with my friend Maritè Vargas around a lagoon, where we see some little tiny bioluminescent fish. I met Maritè through my pug artwork; she co-organized an event where I drew pet portraits to raise money for a local rescue. Her senior pug, Bayly, and Mr. Pickles are just like grumpy old men together.

11 a.m. After my usual coffee date with the pugs, I spend a few hours drawing the final artwork for my comic on The Nib on my tablet. Friday is usually a day for finishing things — inking and coloring, rather than generating ideas — so it’s more relaxed. I listen to the “My Favorite Murder” podcast.

2 p.m. I work on some pages for my next mini-comic book, which I hope to publish next month. I created the first issue last year as an outlet for ideas I didn’t have another place for. The theme for this one is “bad at sports,” and the comic will be called “Bad at Sports Illustrated.” It’s about how terrible I am at sports and my childhood experiences of trauma and P.E. lessons. These are not big sellers or hugely popular — there’s plenty of my work available online for free — but making this kind of work is fun and reminds me why I wanted to be an artist in the first place.

5 p.m. I tidy my studio, which gets pretty messy with books in piles everywhere. Then I do an online Zumba class and watch my current addiction, the Japanese reality show “Terrace House.” Nothing really happens, so it’s quite calming. It’s just people cooking nice food and going for dates in coffee shops. There’s not a lot of yelling. People are just nice to each other. It’s kind of like a salve for the craziness that’s happening outside.