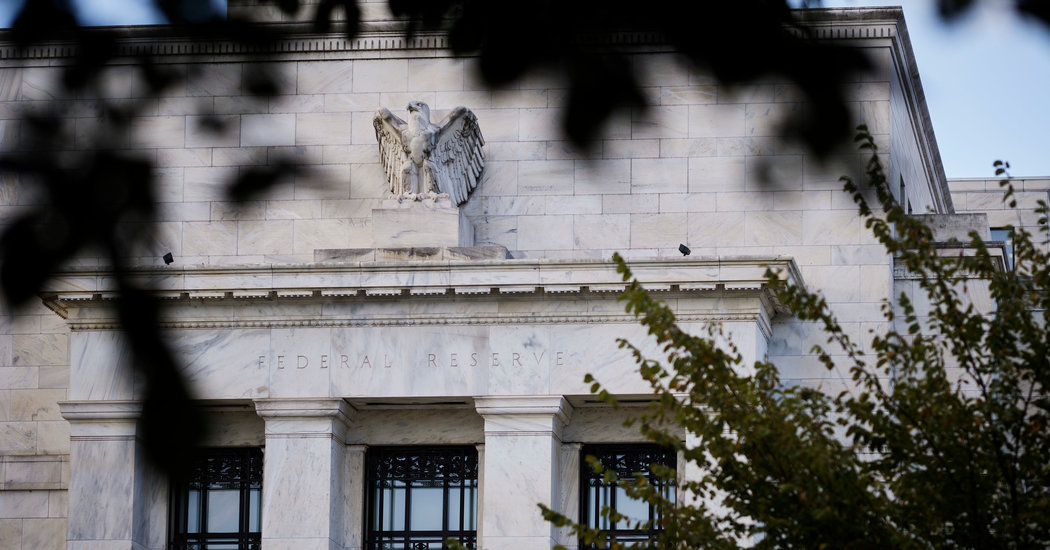 WASHINGTON — The Federal Reserve left interest rates unchanged at its final meeting of the year, and officials signaled that they would wait to see how the economy fared before making another move.

Officials penciled in no rate changes next year, according to their latest set of quarterly economic projections, and saw only one move in 2021, followed by a second in 2022.

The Fed’s wait-and-see outlook underscores the level of comfort that Chair Jerome H. Powell and his colleagues have with the state of the economy after ushering in three interest rate cuts between July and late October. Those moves were meant to guard the economy from the fallout of President Trump’s prolonged trade war and slowing growth abroad.

“Our economic outlook remains a favorable one,” Mr. Powell said at a news conference following the Fed’s two-day meeting. He noted that the economic expansion is in its 11th year — the longest on record — and that Americans who want a job are finding one.

“We expect the job market to remain strong,” he said.

Put simply, the Fed is essentially taking another pause unless something comes along to change its mind.

“As long as incoming information about the economy remains broadly consistent with this outlook” the “current stance” will “likely” remain appropriate,” Mr. Powell said.

In its post-meeting statement, the Fed said “the committee will continue to monitor the implications of incoming information for the economic outlook, including global developments and muted inflation pressures.”

Officials dropped their previous caveat that “uncertainties about this outlook remain,” in a sign of their increasing confidence in the economy.

But Fed officials did not suggest everything was rosy. Mr. Powell said the outlook for manufacturing “has declined,” attributing that to “sluggish growth abroad and trade developments.”

And in its statement, officials said that “although household spending has been rising at a strong pace, business fixed investment and exports remain weak.”

Some of that weakness is attributable to Mr. Trump’s trade war with China, which has put a chill on business investment as companies wait to see whether the world’s largest economies can resolve their differences.

Trade remains a critical wild card for the central bank. While tensions have shown recent signs of easing, how they will end is anyone’s guess. Barring a last-minute delay, another round of tariffs on $160 billion worth of Chinese goods is to go into effect on Sunday, at which point the United States will have imposed levies on nearly every shoe, laptop and bicycle imported from China.

“Policy changes in the speed of a tweet,” said Diane Swonk, chief economist at Grant Thornton. “As good as they feel about things, they also know how fast they can change.”

Mr. Powell’s colleagues lined up uniformly behind the decision to leave policy on hold this month. All 17 Fed officials were comfortable leaving rates unchanged and only four see higher rates in 2020, based on the economic projections, down from nine when the Fed released its last set of quarterly projections in September.

While Mr. Trump has been pressuring the Fed to slash interest rates more aggressively, even urging Mr. Powell and his colleagues to cut borrowing costs below zero, the central bank operates independently of the White House and answers to Congress.

Lawmakers have given the central bank two goals: achieving and maintaining stable inflation and maximum employment. They adjust interest rates to either speed or slow the economy in a quest to accomplish those goals.

Unemployment is at a 50-year low and the job market continues to grow steadily, which is helping to fuel consumer spending and stoke broader economic growth. Inflation, on the other hand, has been mired below 2 percent for much of the economic expansion.

While very slow price gains might sound good to everyday consumers, they can create problems if they continue for too long. The Fed’s policy interest rate incorporates inflation, so weak increases leave the central bank with less room to cut borrowing costs to prop up the economy in the case of an economic downturn.

Fed policymakers see price gains returning to their 2 percent goal only by the end of 2021, based on their latest economic projections.

In a sign of how the Fed is reconsidering long-held policy assumptions, the central bank lowered its estimate of the level of unemployment that the economy can sustain in the longer run. That projection is now at 4.1 percent, down from 4.2 percent in September.

The number has been marching steadily lower in recent years as robust hiring has surprised Fed officials: joblessness has marched steadily lower, but wages are climbing only moderately and inflation has yet to take off.

While the Fed has historically lifted interest rates to guard against price spikes from very low unemployment, Mr. Powell has signaled that the central bank is now comfortable leaving interest rates on hold even with unemployment at a 50-year low. The Fed is watching for signs that inflation is headed higher before it changes course and adjusts rates.