Facebook’s FB troubles look far from being over. Following revelations of Cambridge Analytica data breach, the Indonesian government has warned the social media platform that in case any similar allegation against the company surfaces during the upcoming elections, the application will be stopped in the country.

Notably, the warning is not only directed at Facebook but is also applicable for other key social media players such as Twitter TWTR and Alphabet’s GOOGL Google owned YouTube.

Rudiantara, the country’s Communications Minister noted that previously the country had banned the messaging application, Telegram as it was thought to be used for sending encrypted messages by terrorists. He also noted that the government can repeat its action with Facebook if any activity on the platform is found to influence election results.

Therefore, Facebook should take a good note of the posts on its platform so that the company’s CEO Mark Zuckerberg does not have to post another public apology.

Notably, since Mar 19, when the Cambridge Analytica data breach news went viral, the company’s shares have lost 10% as investors became concerned about the company’s performance. This was further aggravated by WhatsApp co-founder Brian Acton’s tweet requesting his followers to delete Facebook. 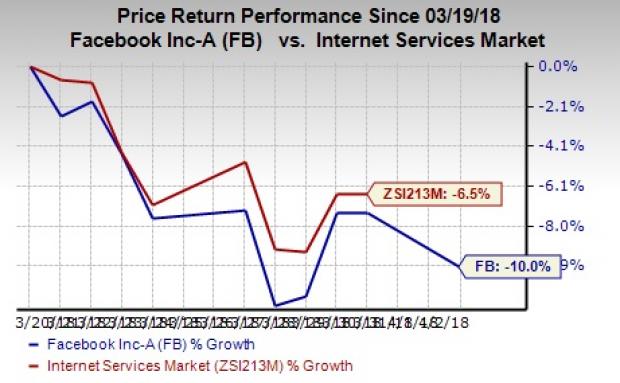 Facebook’s efforts to plug security loopholes as well as limit fake news will eventually boost trustworthiness. Although the company’s focus on building strong “community” can hurt engagement over the next few quarters, the steps are prudent enough to expand user base over the long run.

Moreover, Facebook is benefiting from rising mobile conversions on its platform, which is driving mobile ad growth. Increasing effectiveness of Instagram ads is also a positive. Apart from mobile and video, the monetization opportunities of Messenger, WhatsApp and Oculus and a huge user base are expected to drive growth going ahead. Additionally, AR/VR and AI technologies also bode well for the long-term growth.

The company also managed to sign a broad licensing agreement with Warner (the only remaining music label) and an exclusive broadcast deal with MLB in recent times. We believe these will help the company boost top-line growth going forward.

The Hottest Tech Mega-Trend of All

Last year, it generated $8 billion in global revenues. By 2020, it’s predicted to blast through the roof to $47 billion. Famed investor Mark Cuban says it will produce “the world’s first trillionaires,” but that should still leave plenty of money for regular investors who make the right trades early.