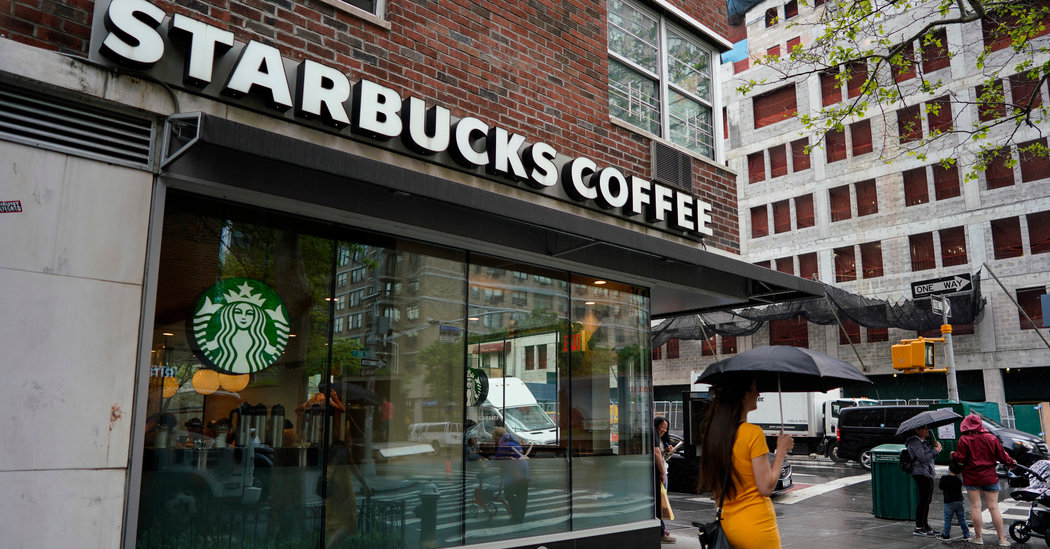 It’s the quintessential Starbucks experience: Walk in, order a piping hot cup of coffee and sit back with a newspaper.

Or, at least, that’s how it used to be in an earlier era. Now, starting in September, you won’t be able to buy any newspapers at the coffee giant’s shops.

The company said this week that it would stop carrying print editions of The New York Times, The Wall Street Journal, USA Today and local newspapers at its 8,600 locations across the country.

Starbucks did not give a reason for the change, but said it would also remove shelving fixtures that display whole-bean coffee and grab-and-go snacks.

“We are always looking at what we offer our customers in our stores and making adjustments to our portfolio based on changing customer behavior,” Sanja Gould, a company spokeswoman, said in a statement Friday.

Starbucks expects the changes to be completed by the end of September.

Jordan Cohen, a spokesman for The Times, said in a statement, “Although disappointed by the decision, we’re confident that given our wide retail distribution, readers will have no trouble finding The New York Times for sale at nearby outlets.” The newspaper had an exclusive arrangement for many years with Starbucks, but the chain began selling other papers in 2010.

The Wall Street Journal was discussing other ways Starbucks customers could access the publication, said Colleen Schwartz, a spokeswoman for Dow Jones, a sister company of The Journal.

It was unclear if sales had anything to do with Starbucks’s decision. Print circulation has declined across the country, according to data published in July by the Pew Research Center. The organization estimated that in 2018, total daily newspaper circulation in the United States, which includes both digital and print platforms, was 28.6 million for weekdays and 30.8 million for Sundays. Those figures were down 8 percent and 9 percent from the previous year.

Coffee and macchiato drinkers at Starbucks shops in Manhattan had mixed reactions to the news.

“I think it should still be available,” Dustin Fitzharris said on Friday while sitting at the 15th Street and 7th Avenue location. “If there is a loss-prevention issue, they should be available behind the counter for people who still want to buy. It is a coffee shop. People still do read.”

He suggested that perhaps some Starbucks customers want their news the old-fashioned way.

At the same location, David Perozzi said Starbucks made a good decision.

“I think it makes total sense; it’s not a surprise,” he said. “It took me a minute to recall seeing a newspaper in Starbucks, because it’s a digital age.”

“I don’t think there is any upside to keeping the paper,” he added. “If you look around in this Starbucks, there’s no one buying a newspaper. It’s just another casualty of change. Another casualty of the internet.”

Joanne McLeod, who was visiting New York from Milwaukee and sitting inside the Starbucks on 16th Street and Eighth Avenue, said the company’s decision wasn’t a great idea.

“People are on their phones too much,” she said. “What happens to the newspapers is people would read them and leave them for other people.”

At least two customers said they had never seen newspapers at Starbucks.

“I’m in Starbucks every day in New Jersey and New York and I don’t feel like I see a lot of newspapers on display,” said Lisa Kelly, who was waiting for someone at the 8th Avenue and 39th Street location.

She said that she usually goes to Starbucks once a day, sometimes twice, and that she would be inclined to read a newspaper if one were around.

“I’ve never seen them selling them,” Jeff Grubb said at the same location. “Honestly, never. I’ve been to many Starbucks in my life. I think they should sell them. The Washington Post, The New York Times, they should be here.”

“I think it would be smart of Starbucks to offer things to read,” Mr. Grubb said. Starbucks, in his opinion, needs to up its “game” or it’ll be “extinguished soon.”

“They’re like McDonald’s now, it’s kind of a thing of the past,” he said.