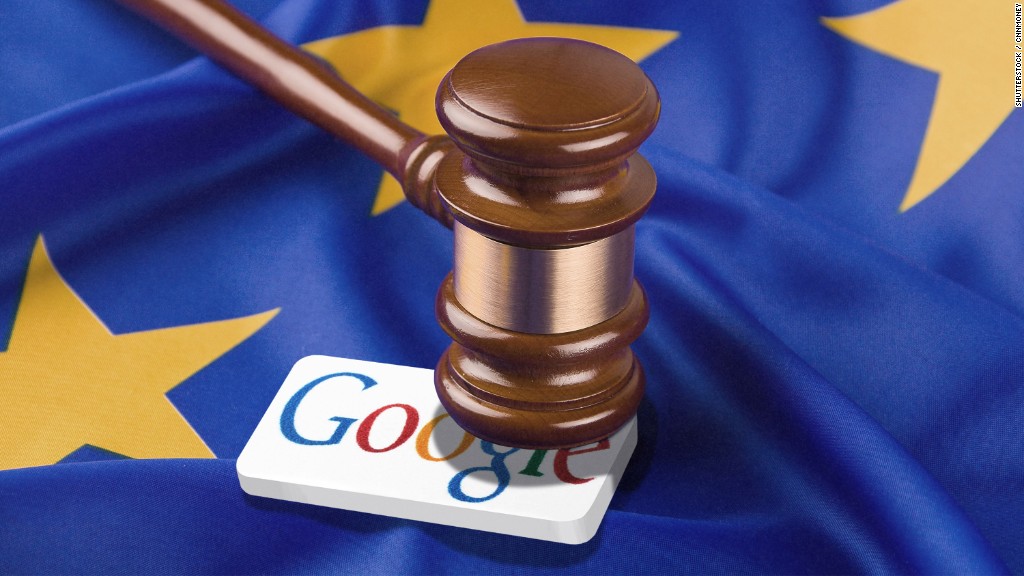 The fine — announced Tuesday — is a record, but it’s not unique. Other U.S. companies have faced similar penalties. Intel (INTC, Tech30) was fined €1.06 billion ($1.2 billion) in an antitrust case in 2009. It is still fighting the decision.

Before that, Microsoft (MSFT, Tech30) was slapped with several antitrust fines that added up to well over $1.8 billion.

These fines make people wonder whether the EU has something against American companies.

But EU rules are clear. The European Commission can levy fines of up to 10% of a company’s global annual turnover in antitrust cases. Google’s (GOOGL, Tech30) global revenue last year was almost $90 billion, which means the maximum fine could have been $9 billion.

“The same guidelines would apply if it was a U.K., French or any other [EU] member state’s company being fined,” said Adam Rooney, a partner at Signature Litigation, a firm focusing on commercial cross-border disputes.

European companies get hit too

But there have been cases of the EU imposing big fines on big European businesses. Germany’s Daimler (DMLRY), which makes Mercedes cars, was fined €1 billion in a cartel case last July.

But it’s not just the size of the penalty that bothers some in the U.S.

“We have grave concerns about this fine which appears, once again, to justify our long held concerns about EU antitrust overreach adversely affecting U.S. companies,” said Gary Shapiro, the president of the Consumer Technology Association, the tech sector’s industry body.

The EU’s top antitrust official, Margrethe Vestager, on Tuesday rejected suggestions she or the Commission were biased against U.S. companies.

She said that an analysis of investigations her department has launched found that U.S. companies were not being disproportionately targeted.

Vestager also pointed out many of the companies that complained against Google were based in the U.S.

Indeed, some of Google’s American rivals praised the Commission’s decision.

News Corp (NWS), one of the companies that complained about Google’s practices, said it “applauds the European Commission’s leadership in confronting the discriminatory behavior of Google.”

News Corp, Yelp (YELP), Getty Images, Oracle (ORCL, Tech30) and several other companies wrote to Vestager on Monday to express their support for her investigation into Google.

“As U.S. based companies, we wish to go on record that enforcement action against Google is necessary and appropriate, not provincial. We have watched Google undermine competition in the United States and abroad,” the companies said in the letter.

Experts say it all comes down to different regulations and culture in the U.S. and EU.

Point in case: The Federal Trade Commission was also investigating the way Google favors its own services, but it never took formal steps to bring a case against the company.

“The big difference is cultural,” said Angus MacCulloch, a lecturer in EU law at Lancaster University.

“The European view of the marketplace is more suspicious of ‘market power’ held by large corporations, be they European or U.S.-based. The EU Commission is therefore more likely to intervene in the market to protect consumers; especially when compared to the US enforcers,” he said.